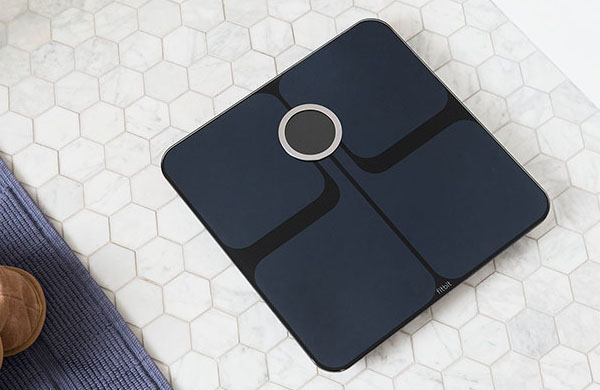 A while back I noted that I’m only three quarters of the man I used to be. I attributed that in part to Fitbit. In addition to its tracker bands, I had been tracking my weight with the Fitbit Aria smart scales. But now there’s the Fitbit Aria 2. Is it better?

Indeed, why should I even change? I’ll tell you why: the setup process for the Fitbit Aria, which I’ve been using almost daily for eighteen months, is a pain. And quite iffy. You see, you want your smart scales to feed your information to your Fitbit profile. Then you can see it on your little section of the Fitbit website. Or you can see it on the Fitbit app on your phone. Or on the Windows Store app, installed on your computer.

Most importantly, you can see that smoothly descending line on the chart, showing your weight loss success. Or be horrified by the sharply ascending line, as the case may be.

Perhaps if I were in a different line of work getting the old Fitbit Aria to talk to my network wouldn’t be a problem. But I’m frequently changing network infrastructure, and that means re-connecting it far too often. With the Aria, you had to reset it, then call it up as a Wi-Fi access point, then feed it a password, and then hope it connected. Often it didn’t, and it was unclear why, although perseverance always paid off in the end.

The very first feature listed on the box of the Fitbit Aria 2 is “Easy smartphone setup with Bluetooth technology”. That’s speaking my language.

But we’ll get to how well that works in a bit. First, let’s look at the Fitbit Aria 2 in a bit more detail. At first glance, it is a standard set of scales. Fitbit didn’t go for a style change from the old Aria. It looks identical. Fitbit sent me the white one, but black is also available.

They differ little from any bathroom scales, except for a clean look. They measure 312mm front to back, and side to side. The top is glass. A 50mm backlit display is at the top. Three AA batteries, which are supplied and pre-installed, power them. You just pull the tab.

When you weigh yourself, the scales will automatically upload the weight to your Fitbit profile. (Did you know that you can download your Fitbit data from its site? The nerdier types can then do their own statistical analyses and charts.)

But you can have the scales automatically recognise up to eight different users and upload the data to each of their individual profiles. I guess it knows who is who by their weights, so I expect it might get confused if someone’s weight swings wildly.

The old Fitbit Aria showed not just weight but also took a guess at body fat percentage. I say “guess” because the results seemed odd to me. One day I’d be lighter than the next, yet the fat percentage was apparently higher. The overall trend was right, though.

Anyway, I’m writing this bit before I’ve set up the Fitbit Aria 2, so it’ll be interesting to see if Fitbit has added anything. The box seems to indicate that it shows weight, lean mass, body fat and BMI. But it could be that it shows these via the app.

So, I guess I’d better go and set them up, and see precisely what they do.

A cardboard band on the scales warn that that you should not used them “if you have a pacemaker or other implanted medical device, or are pregnant”. Also, they are not intended for use by kids under 13 years old.

As is the way with modern smart devices, the supplied instructions are minimal. Basically, install the Fitbit app on your phone, pull the tab from the back of the Fitbit Aria 2 so that the batteries connect, and then follow the instructions in the app and on the unit’s own display. So let’s do it.

Well, pulling the tab did nothing. It must have dislodged one of the batteries. I opened the battery holder, spun them around to make sure the contacts were in contact, then put the scales back down. Its display lit up. After a little smiley face, it simply displayed www.fitbit.com/setup. So I went there in the browser on my phone, and it told me to get the Fitbit app.

Which I already have on my phone. So you’re on your own for a while until you work out that you have to tap the icon in the top right corner of the app dashboard. That’s where your current devices are listed, along with a “+ Set up a Device”. Tap that and scroll down a bit and there’s the Fitbit Aria 2 shown.

Then, tap on the Setup button, and about a second later the app reported that it had found the Fitbit Aria 2. Fast. The scales showed four digits, and the app asked me to enter them. I did, and then the app brought up a list of available Wi-Fi SSIDs. I tapped the appropriate one, entered its password, and a few seconds later was rewarded with “Success”.

Plus a chance to pick a “personalized icon” to show after I weighed myself each time. And that was it.

How do you select?

Whoops, I wrote too soon!

I got on the scales. It lit up and weighed me. Then it showed an icon of a head with a question mark. Who was I? Then it flipped over to a new display, showing the personalised icon I had selected, with an X to its left and a tick to it’s right. Was this a touchscreen? How do I select?

The answer was obvious, but I had to check the user guide in the app since I’m not always good at guessing the obvious. I had to tap one side or the other of the scales to select. But it had since switched off, so I stood on it again, and this time I selected the tick. And that really was it this time. I stood on the scales again, and they recognised me. Within ten seconds they’d cycled through their display process – showing my weight, and then my body fat percentage, and then my icon. (The old Aria would show my initials. I think I would like to have that option.) Then it whirled a few gigs on its display while it connected to the network, followed by a big tick. The tick meant that the information had been uploaded.

So, setup, very easy. I’d just like a little more information and coordination between the app, the setup sheet in the box and the setup display on the Fitbit Aria 2.

How accurate are they?

And you know what else? These scales gave me a very good additional reason to like them straight away. I weighed myself, and they mostly showed 89.0 kilograms. A couple of times they showed 88.9kg. I went immediately to the old Fitbit Aria scales, and they showed 89.4 kilograms. How to lose 400 grams, just like that!

To check, a pair of Weight Watcher scales showed 88.8 kilograms. Then I went to my office scales. These were calibrated scales when I purchased them around fifteen years ago. I haven’t had the calibration re-checked since then, but I don’t use them much so I doubt they’ve drifted far. They also showed me as 88.8 kilograms.

I’m figuring on a strictly democratic basis that the Fitbit Aria 2 is reporting my weight more correctly that the old Aria.

There’s more of course. You can re-assign “Weigh-Ins” from one user to another through the app, or delete the more embarrassing ones altogether. The scales again showed weight, followed by an estimated fat percentage. But I discovered that you could use the app to add lean mass and BMI to the results or switch off the others

After setting up the app, I moved the scales to my bedroom ensuite, where the Wi-Fi connection is borderline. Aside from taking a few seconds later to deliver the tick of success, they worked just as well there.

So I find the Fitbit Aria 2 scales solves the connection problems, working reliably, well and reasonably accurately. They are well worth it.

Overall
Features
Value for money
Performance
Ease of Use
Design
Reader Rating0 Votes
Easy connection to Wi-Fi, great way to keep track of your weight
Instructions could use a little more work
4.6