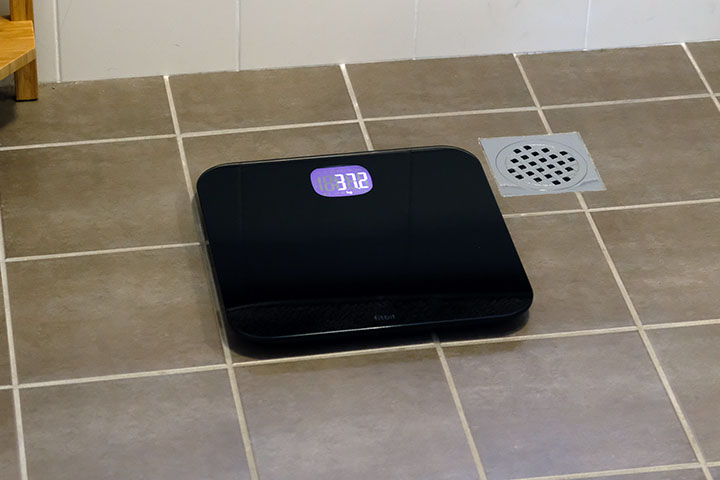 One of the things I like about Fitbit is that it has a whole ecosystem of products, including smart scales for weight tracking. Last year we reviewed the company’s then most recent, and still premium, scales, the Fitbit Aria 2. Now they’ve been joined by the, well, lighter-weight Fitbit Aria Air scales.

In short, the Fitbit Aria Air scales are digital scales with a capacity from 5 to 180 kilograms. They can sync their measurement data with the Fitbit app on your smart phone or tablet. The app can keep track of your weight over time, draw graphs and so on.

So far, much the same as the Fitbit Aria 2. So, what’s different?

Second, they’re a little lighter and smaller: 300mm square versus 313mm square. 25.4mm tall versus 33mm tall. 1.74kg in weight versus 1.94kg. Both are available in black and white, but the new model lacks the gentle pattern on the surface of the Aria 2.

The Fitbit Aria 2 will show your so-called “body composition” – the percent of your body it considers to be fat. The Fitbit Aria Air won’t. No great loss, I say. I’ve been using the Aria 2 and its predecessor for some years, and while the overall trend seems to be in the right direction, day to day those figures don’t make much sense. Unlike your weight, smart scales can’t measure fat percentage, so they use some kind of algorithm to estimate it. I think they need a better algorithm.

I’m fine with them lacking that bit of functionality.

But the biggest difference between the two devices is how they connect to feed the weight data into the Fitbit app’s database.

How the Fitbit Aria Air connects

The Fitbit Aria 2 primarily communicates via Wi-Fi. Once you’ve set it up, then it’s just a matter of stepping on it as required. It will identify you by your approximate weight – both scales support multiple users – and send the weight to your profile database via Wi-Fi. This is maintained on Fitbit’s servers. Whenever you open the app on your phone, tablet or computer, it is updated from that server data.

The Fitbit Aria Air does not have Wi-Fi. It uses Bluetooth. And it uses the app on your phone as the conduit for the data.

That has the advantage of not requiring much setting up. But the downside of having to have your phone handy when you’re weighing yourself.

You set up the Fitbit Aria Air within the app. Tap the device “+” button, select Aria Air and follow the instructions. It will have you turn on the Aria Air at a suitable time, find it, identify it and associate it with your profile.

To weigh yourself, you open the Fitbit app at the main “Today” page. Then you step on the scales. The scales notice your presence and switch themselves on.

Your weight comes up, shown by large numbers in pale blue on black, constructed from seven-segment digitals in the LCD. The units shown in small characters underneath. You can change the units to Imperial using a button on the back.

After a few seconds, the display shows a small Bluetooth logo at the top and the app on your phone jumps to a new page. This shows the weight and date. You can then tap “Save” to add it to your database. So, it seems, the app must be scanning for the scales whenever its on the “Today” page of the Fitbit app, if you have an Aria Air associated with your profile.

I setup up the Aria Air using my Android phone. Initially the data would not transfer. I put this review on the back burner for a week or so, and then I received a customer service email from Fitbit saying that the app had been updated to fix connection problems. I tried again and it worked properly. And it has ever since.

Today I logged onto the Fitbit app on my iPhone and tried that. But again the data would not transfer. Then I realised I hadn’t updated that app on the iPhone. I updated it, and it worked straight away.

I continued to use the Fitbit Aria 2 scales as well. The Aria Air always gave a result within 0.1 kilograms of that on the Aria 2.

The Fitbit Aria Air scales are a bargain. They aren’t quite as much a set-and-forget deal as the Aria 2, given that you must have the Fitbit app open to the main page when you’re using them. If, that is, you want to log the data; if you’re just curious for the moment, you don’t need the phone handy.

But, then, setting up was easy and reliable. And they’re half the price.

You can purchase the scales at the usual retailers, or direct from Fitbit here. (Make sure you click on the button next to the Aria Air so you don’t buy the Aria 2 by mistake.)

Features
Value for money
Performance
Ease of use
Design
Excellent value for money
No pairing required
Accurate
Must have phone handy with Fitbit app open to record result
4.6