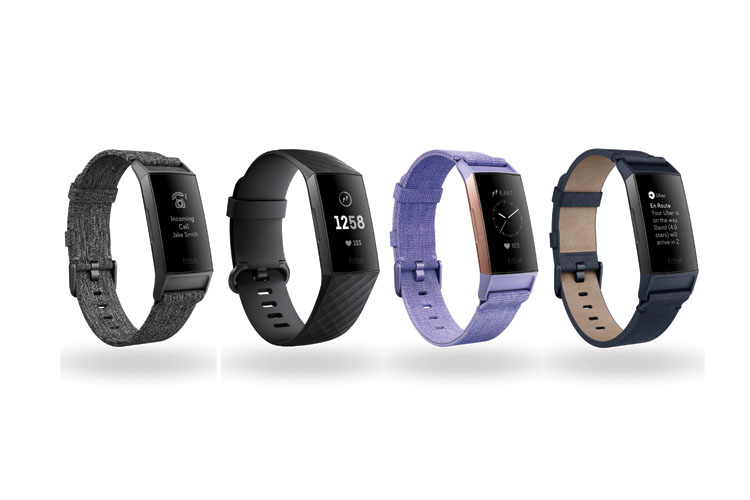 The other day I got an email from Fitbit, telling me that I’d “earned the Nile badge”. It turns out that since I started using Fitbit devices a few years ago, I’ve walked the length of the Nile River, some 6,649 kilometres. The latest Fitbit device to count my steps is the new Fitbit Charge 3.

In fact, it was with a Fitbit Charge HR that I started my journey down the Nile. (And towards my “Spaceship badge”, which commemorates my ascent through the equivalent of 14,000 building stories). The Charge HR was a variation on the first of the Charge models. The HR stands for Heart Rate, since that version had heart rate tracking built in.

If you check out our 2014 review of the original Fitbit Charge, you’ll see that the new Fitbit Charge 3 has come a long way. It, of course, now incorporates a heart rate monitor as standard, along with a whole lot more.

The Fitbit Charge 3 comes with both small and large band sizes, so it’s kind of a one size fits all thing. Switching bands was easy. There is a choice of band colours available. In addition to the standard model with a dark aluminium finish, a Rose-Gold coloured special addition with a woven band is available for $40 more. Optional, fancier bands can also be purchased.

The main body is made of aircraft grade aluminium and the display is covered with Corning Gorilla Glass 3 for scratch and smash resistance.

The face of the Fitbit Charge 3

The display is monochrome – black and white and grey – using OLED technology. It is touch sensitive. The display area measures, as best as I can tell, 14mm wide by 23mm tall. I saw third party reports that the display had an area of 696 square mm. I don’t know how they got that figure. The entire display panel is 18mm wide by 34mm tall, and that is only 646 sq. mm. The display section is smaller than that.

Does it matter? It can make for small text which can be hard for those of us with imperfect close vision to read.

According to my scales, the Fitbit Charge 3 weighs 29.8 grams. That’s with the larger band fitted and (I’ll admit) a couple of months of accumulated grime. After that couple of months, the unit still looks quite handsome.

The Fitbit Charge 3 is categorised as a fitness tracker, but it also has some smart watch features.

The Fitbit Charge 3 is very good in the fitness tracking department because it adds swimming to the exercise it can track. To that end it is rated at water resistance to fifty metres. Yes, it is actually waterproof. I tried it. It survived.

When it’s tracking swimming, it tried to lock into pool lengths, counting in 25 and 50 metre increments. I am a truly appalling swimmer. I think it got confused at a couple of points by my slow speed and poorly coordinated flailing in the water. So, a couple of times it thought I was doing 50 metre laps when I was only doing 25. Pay attention at the start so you understand how it’s counting and you’ll be fine.

The unit can track other exercises: running, walking, hiking, playing golf, climbing stairs, playing tennis, doing intervals and cycling. Heck it even has measurement profiles for Yoga and Pilates. You can assign up to six shortcuts to be selected from the Fitbit Charge 3 screen and change the order. Since I mostly walk, I put that one at the top of the list, so it only took a couple of taps and swipes to start a formal “exercise” routine.

The Fitbit Charge 3 tracks your steps and distance travelled all the time, along with your heartrate. It also tracks your sleep patterns. Starting an exercise records that as a special event. Whether regular tracking or exercises, the device can hold up to seven days worth of data for later syncing with your phone, should it not be nearby at the time.

But you will typically prefer to have the phone handy. Unlike the Fitbit Ionic, the Fitbit Charge 3 does not have GPS built in. But like the Fitbit Versa, it has a facility called “Connected GPS”. That means that it can draw on location data in your phone to record your route during exercise sessions. It later presents this as a map in the app.

That’s for “travelling” type exercise, of course, such as walking, running, hiking or cycling. I found this to work more reliably than it did with the Versa (although by now, the Versa firmware has probably been upgraded to improve it.)

As a fitness tracker, the Fitbit Charge 3 is simply excellent.

By default, the Fitbit Charge 3 also reminds you on a regular basis to exercise. Fortunately, you can switch that off in the app.

But the Fitbit Charge 3 adds some features which are usually associated with a smart watch.

For example, while the Fitbit Charge 3 has a display similar in size to that on the Charge 2, it is more flexible. In particular, you can install a range of watch faces to give it the looks and information that you like. They are monochrome only, but you can choose from digital and analogue versions, with things like date, number of steps, heart rate and so on. At this stage, all of them are free, developed by Fitbit.

The Fitbit Charge 3 also displays notifications from your phone. When an email or text or whatever pings your phone, it’ll also vibrate your wrist. And it can display on your tracker’s display. Instead of fishing the phone out of your pocket, you can flick your wrist up and, if your eyesight is sharp enough, read the message.

You have control over which notifications display. I found after a while it was best to switch off email notifications because they would be consistently appearing when all I wanted to do was check the time.

You get rid of things or display the notifications again (along with the text of the messages) by swiping or tapping the touch-sensitive button on the left of the Charge 3’s body.

The big new feature in the Fitbit Charge 3 is Fitbit Pay. This device has NFC – Near Field Communications – built in. You can link your card from any of the big four banks to the Charge 3, and then just hold it up near the checkout scanner to pay.

Of course, you can probably do that with your phone. But that typically involves fumbling for your phone. I go into this a fair bit more in a previous review. In short, it works, and it can be quite convenient.

Especially if you live in Sydney. Fitbit has just announced that Fitbit Pay now works with the NSW transport system (those parts of it that work with the Opal card). I would suggest reading here about some limitations and possible additional costs with using it for that purpose.

The Fitbit Charge 3 is charged up using the supplied charge cable, which has a spring-loaded head that grasps the main section of the Fitbit. You supply the 5 volt USB power. It takes a couple of hours to fully charge, and is rated to last for up to seven days. I certainly found no need to charge it more than every four days, despite constant use.

The Fitbit Charge 3 is first class fitness tracker. The Fitbit app and general ecosystem (including the Aria 2 smart scales) work well, with convenient syncing to all your smart devices. The addition of swimming tracking (and general waterproofing), and Fitbit Pay, bumps the device up into an almost-must-have.

The caveat there is that it is of no use to anyone who already has a Fitbit Ionic or a Fitbit Versa.

Fitbit’s Australian web page for the Fitbit Charge 3 is here.

Features
Value for money
Performance
Ease of use
Design
Excellent fitness tracker
Can use to track swimming
Choice of clock displays
Fitbit Pay may be useful for some
Can’t use in conjunction with Fitbit smart watches
4.5