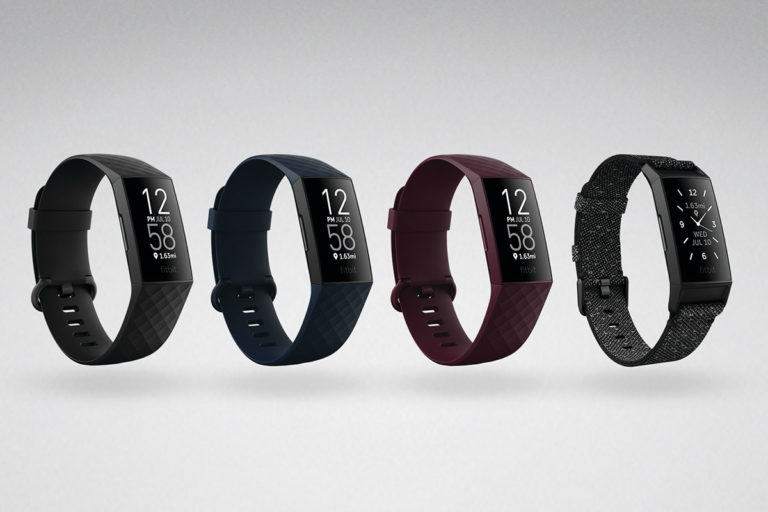 Golly, it’s nearly eighteen months since the Fitbit Charge 3 was released. We reviewed it here. And now there’s a Fitbit Charge 4 fitness band, with a couple of nifty new features.

Fitbit calls the Charge 4 an “Advanced Fitness Tracker”. But, as I keep saying, the differences between fitness trackers and smart watches – such as Fitbit’s own Versa 2 and Ionic – are diminishing all the time when it comes to functionality. It’s mostly just style. Smart watches tend to have round or square faces. Fitness trackers tend to have smaller rectangular displays.

And so it is with the Fitness Charge 4. It has a stack of very smart features in the silicon behind its greyscale touchscreen. I couldn’t find formal specifications for the screen on the Fitbit website, but other sources suggest that the display is 100 pixels wide by 160 pixels tall and that it has a 1-inch (25.4mm) diagonal. My own attempts to measure it were consistent with that. I measured a display area around 13.5mm wide and 22mm tall. The main body of the Fitbit Charge 4 is bigger than that: 22.6mm wide by 35.8mm tall.

It comes with a silicone band in two sizes so it ought to be able to fit any wrist. I used the larger band, but it could clearly accommodate perhaps 50mm more wrist circumference.

On the left side is a slightly recessed press button, the only mechanical control on the unit. All other interaction is via swipes and taps on the screen. Also on the left side, just on the edge of the screen face, is a tiny notch. I mention this because it kept catching my eye. Initially I thought I may have banged the unit, but in fact it is supposed to be there. It is a small hole to permit air pressure to be measured by the altimeter.

The smarts of the Fitbit Charge 4

There are more smart things to this device than an altimeter. The Fitbit Charge 4 supports Fitbit Pay, Bluetooth LE, timers, alarms, weather display, Agenda display, “Relax” routines and the main Exercise app for recording your activity. The apps requiring outside data – the weather one, for example – rely on their Bluetooth connection to your phone. If you have a Spotify Premium account, you can also control music playback on your phone or on Spotify Connect devices in your system. More on that later.

You access the apps by swiping to the left from the main screen of the device. As far as I could work out, there’s no way of removing apps or changing their order – you see only two apps per page when you do swipe left.

The Exercise app has 21 different activity types for recording, from walking, biking and swimming – yes, the Fitbit Charge 4 is safe for swimming – to Elliptical machines, Bootcamp and Kickboxing. You can specify up to six for immediate selection on the device’s screen. What they record will vary according to the type of exercise. Those involving actual travel invoke GPS. That’s another major new feature on the Fitbit Charge 4: it’s built in. The Charge 3 could also use GPS, but it relied on the phone for that. With the Charge 4 you can leave your phone behind and still track your exercise.

The one other obvious difference between the Fitbit Charge 4 and the devices Fitbit labels as smart watches is that the Charge 4 does not have Wi-Fi built in. All comms are via Bluetooth.

Spotify Control on the Fitbit Charge 4

This is a new addition to this model. Indeed, it wasn’t available on first release but a firmware upgrade provided it. When that’s done you see the Spotify logo as one of the apps you access by swiping left on the screen. Setting it up is easy enough, but I went down the wrong path for a while. When you go into the Fitbit Charge 4 settings in the app, you’ll see a prominent Spotify logo.

Ignore it. You need to tap on “Apps” and then on the gear icon next to “Spotify – Connect & Control”. Then you can log into Spotify. That done, the Charge 4 showed the “Installed” tick on the screen and I was right to go.

Spotify control is all very cool. Because of the small display, Spotify control is spread over several screens which you get to by swiping left and right. The main page shows track title, artist, track time with a progress bar and a pause/play button. The next page has forwards and backwards skip. The page to the left of the main page shows a list of albums in your collection so you can pick something else.

The right-most page shows currently available Spotify Connect devices. In my office it showed an Echo Show 8, a second Echo device and a Denon AVR-X3500T home theatre receiver. At that moment I was playing music on my phone through some Audio-Technica earbuds (review to come). I said to the Echo Show 8, “Alexa, play Amanda Palmer on  Spotify” and a few seconds later, she started playing on the Echo Show 8, while the music through the earbuds stopped. Using the Fitbit Charge 4, I tapped on the Denon and it switched on. The music on the Echo stopped and emerged from the Denon.

All good fun. Except that there’s no way at the moment of controlling the volume with the Fitbit device.

The Fitbit Charge 4 was comfortable to wear, and because of the relatively narrow screen, it was a bit easier to see the whole screen, now that it’s winter and we’re all rugged up.

It is as highly usable as the others, except that the text sometimes seemed a bit smaller. I typically have messages from WhatsApp bounced across to the Fitbit screen. Most times I needed to put on my reading glasses to make them out. You can also have the Fitbit Charge 4 notify you about incoming phone calls, and answer by tapping the screen.

The tracking seemed fairly accurate, and as far as I could judge, the heart rate monitor seemed accurate, too. After a long lockdown induced absence, I was this evening finally re-admitted to my local gym so I was able to check it against the one on an exercise bike that I trust. The Fitbit Charge 4 mostly reported a heart rate within a couple of bpm of the machine, although on a couple of occasions it wandered off by 15 or so bpm.

There was only one real irritation, and it appeared after the last firmware update. That is, when I’m exercising, the Charge 4 sometimes vibrates briefly and when I hold it up, it shows me a message of encouragement. I don’t want my attention attracted by it. Worse, the message would linger for a while. When I was riding my bike, I find it useful from time to time to lift my wrist to check my speed. Many times I’ve listed my wrist to see not my speed, which is the default display on the Bike exercise screen, but some inane message. I’m hoping this will be fixed in the future, or perhaps there’s some setting I haven’t yet found.

The Fitbit Charge 4 has been widely lauded for its GPS inclusion. And I must agree that it is very useful. Note, the device can hold a lot of data without syncing. Fitbit says:

So get back to your phone within seven days and pretty much everything should be saved.

But it’s also a mixed blessing. The GPS chews through the power. As Fitbit says, the battery life is up to seven days normally, or five hours with GPS. When I went for a one hour ride, around a quarter of the battery was used.

You can switch GPS off, but if you do that it doesn’t fall back on using your phone’s GPS. So you don’t get the full tracking if you do switch GPS off and take your phone with you. For example, I’ve just walked around the block three times. The first time I took my phone and GPS switched off on the Charge 4. The app shows basic details, including distance, but no tracking map. Then I went twice more with the Charge 4’s GPS switched on, once with the phone and once leaving the phone behind. After syncing, the app showed a map for both. (See graphic above.)

The Fitbit Charge 4 is clearly both a fitness tracker and a smart watch. It’s compact, with a decent battery life (when you’re not doing GPS-tracked exercises) and solid tracking.

You can see Fitbit’s website here. It is priced at $249.95. There is also a special edition with a fancier band in addition to the standard one ($289.95). If you have a Fitbit Charge 3, the same bands fit.

Finally, one more time, a plea: Fitbit, could you please allow more than one of your higher end trackers to be linked to the app at a time? I’d love to use the Ionic, the Versa 2 and the Charge 4 for different purposes, but to do that I have to disconnect the current one from the app and install the new one. And that’s a pain.