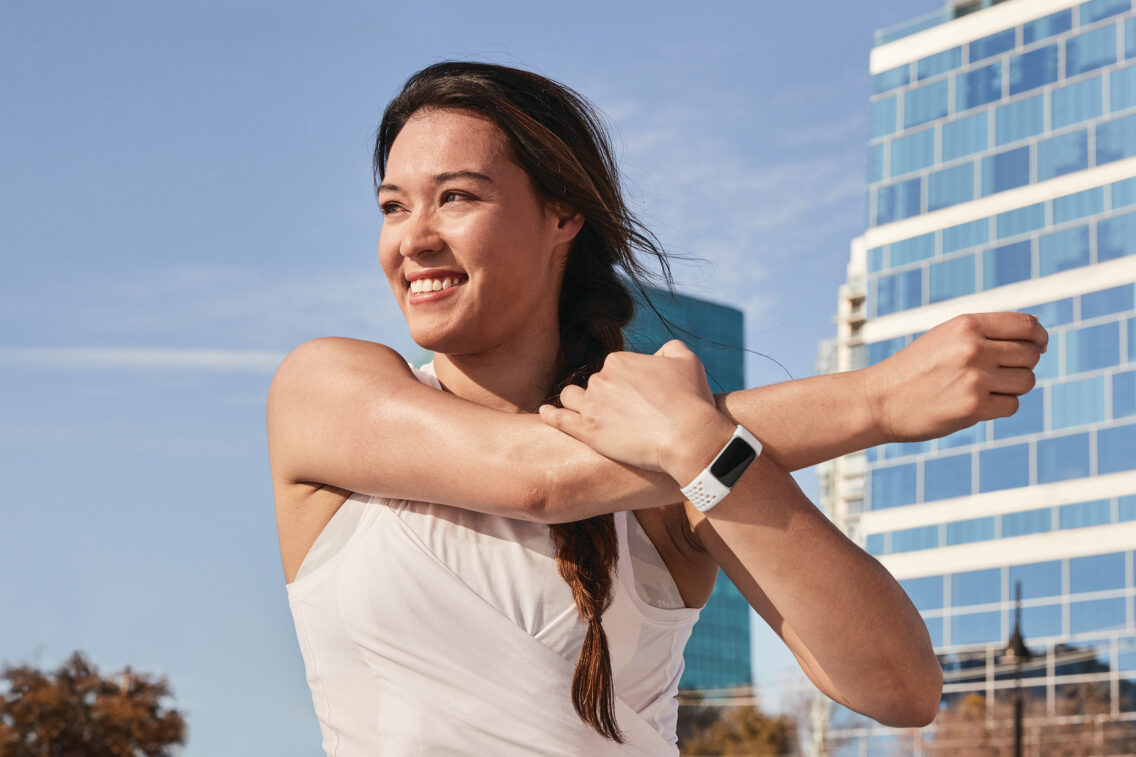 Fitbit is a great all-rounder when it comes to health and fitness tracking, partly due to its generous range of form factors and price points. If you’re keen on a watch-style device, FitBit has you covered with the Sense and Versa. If you’re after something more slender, the Charge is a great option if you’re prepared to sacrifice screen real estate and a few advanced features.

The FitBit Charge 5 aims to offer the best of both worlds – inheriting more health features from FitBit’s smart watches, while sticking with the more elegant band-style design which is slimmer than its predecessor. Unfortunately, it falls short on smart features.

As a FitBit Versa owner, I wouldn’t be prepared to scale back to the Charge 5’s smaller screen size. If that doesn’t bother you, the FitBit Charge 5 makes a great first impression, delivering a lot of significant improvements on the FitBit Charge 4.

For starters, the Charge 5 is slightly wider than its predecessor but also 10% thinner, helping it look more elegant and making it more comfortable to wear – especially if you leave it on at night to take advantage of sleep tracking. The aluminum housing ensures it looks a bit more stylish than the Charge 4, but if style is your primary concern you should consider FitBit’s other bands like the Luxe.

The most striking improvement is the fantastic colour AMOLED display, which is twice as bright as the Charge 4. With vivid colours and great contrast it’s very easy to read in any lighting conditions, thanks in part to a slightly larger display which retains the high 326 ppi density. It would be nice to see that bezel made smaller on future models.

Even better, the Charge 5 adds the option for the screen to always stay on, so you can see the time at a glance. It’s a welcome improvement considering that, with this switched off, the screen is still slow to wake when you turn your wrist compared to something like an Apple Watch.

To save battery, you can schedule the screen to automatically disable always-on in the middle of the night.

FitBit’s slick menus and large icons make it easy to find your way around even if you’re not wearing your reading glasses. This is great when you’re at the gym, scrambling to find a certain activity before your session begins.

The choice of watch faces is designed to suit the shape of the screen, so few look like a traditional analogue watch face – which might disappoint some traditionalists.

The Charge 5 does away with the Charge 4’s inductive button on the left, in favour of a completely touch screen interface. The interface is still intuitive, once you make the adjustment, and ditching the button will be welcomed by those who find they trigger the buttons on their fitness wearables by accident when bending their wrist.

By default, FitBit’s fitness goals and alerts are less annoying and intrusive than some fitness ecosystems, although you still might want to kill the regular “move” reminders.

With the FitBit Charge 5, FitBit’s fitness trackers are no longer second-class citizens compared to its smart watches.

Unlike FitBit’s other fitness trackers, the Charge 5 sports built-in GPS. This lets you track an outdoor activity even when you don’t have your smartphone at hand. Unfortunately, its usefulness is somewhat limited when the band can’t play music locally, meaning you’re likely to leave your phone at home.

The Charge 5 tracks more than 20 different workout types, some which auto-detect, plus it’s water resistant so you can wear it while swimming. There’s only room to store six activities at any one time, which you can manage with the Fitbit app, which might frustrate people who like to change it up and keep the body guessing.

It fitness band also sports several health monitoring features which were previously only available on FitBit smart watches. The highlights include an ECG sensor for spotting heart irregularities and an electrodermal activity (EDA) sensor, which measures small electrical changes in your skin’s sweat to track your body’s response to stress.

Other health monitoring includes sleeping tracking and an SpO2 sensor for blood oxygen levels. One surprising omission is the altimeter.

When it comes to metrics like sleep and stress, you’re given a score out of 100 so you can see how you’re tracking.

This wealth of health data is brought together in a new “Daily Readiness Score”, which is available as part of the FitBit Premium subscription (the device comes with a six-month Premium membership). It basically weighs up all the data to decide whether you’re up for a solid workout or a rest day, plus it suggests workouts or meditation sessions depending on your readiness score.

It’s not the kind of feature that will appeal to everyone, but that could be said for many of the FitBit’s advanced features. If you’re keen enough to pay for FitBit Premium, you’re probably keen enough to take advantage of this kind of insight.

This one area when the FitBit Charge 5 still falls short of some FitBit smart watches, not to mention rival watches from the likes of Apple.

You can receive notifications on the fitness band, as it vibrates but there’s no built-in speaker. Keep in mind you can’t make or receive calls and texts, there’s also no smart assistant support.

The ability to fire off quick scripted replies to messages is limited to Android phones. Don’t expect Apple support to improve now that Google owns FitBit, and iGadget owners will be frustrated that FitBit health data won’t sync with Apple health data.

There’s also no support for third-party apps, while FitBit has removed the ability to remotely control Spotify running on another device. Even the weather app is gone.

One of the trade-offs for this lack of smart features is that the battery lasts for about a week without enabling the always-on display. Otherwise, expect to charge it about twice a week.

There’s a lot to like here, especially if you’re looking to upgrade from the Charge 4. The FitBit Charge 5’s strength is the wealth of fitness features inherited from the FitBit smart watches.

Of course, that assuming that you’re happy with the limitations of a “fitness band”. In this case, those limitations mean forging a lot of smart features, even simple ones like controlling your music remotely. If you primarily want a smartphone strapped to your wrist, this isn’t the device for you.

No, because I prefer the larger screen size and advanced smart features of a smart watch.

FitBit Charge 5
If you favour a fitness band over a smart watch, the FitBit Charge 5 is a very smart choice.
Features
7
Value for money
8
Performance
8
Ease of use
8
Design
9
Positives
Slender design
Vivid colour display
Negatives
Smaller screen than smart watch
No support for third-party apps
No Spotify control
8