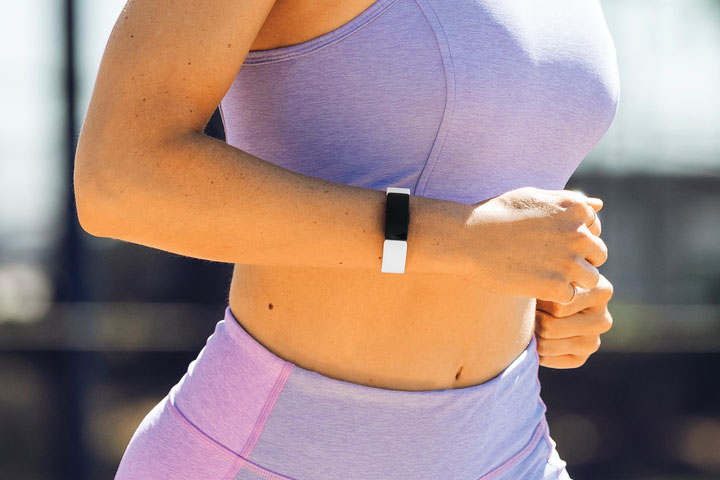 Want something less than a full-blown smart watch with multiple functions and a $400+ price tag to track your fitness? But also something more than a “dumb” band which does nothing else? The new Fitbit Inspire HR might be just the thing for the job.

The Fitbit Inspire HR provides the full suite of tracking. It uses a three-axis accelerometer to sense its movement. Fitbit’s algorithms convert this into things like the number of steps you’ve taken. It has an optical sensor on the back that is able to determine your heart rate by means of subtle colour changes. If you’re not interested in your heart rate, you can save $50 with the standard Fitbit Inspire. But the heart rate data does provide addition date to the Fitbit app so it can better determine the actual amount of work you’re doing.

The standard band is silicon and is available in black, white or mauve (the non-HR version comes in black or “Sangria”).

Its lithium-polymer battery is rated at up to five days of operation and takes no more than two hours to charge. The Fitbit Inspire HR can hold up to seven days of minute-by-minute tracking data, and five-second-by-five-second heart rate data. It holds daily stats for up to a month. Normally you’d sync with the app on your phone at reasonable intervals.

When you do sync, your data is uploaded to your account which is maintained on Fitbit servers. You can log onto it via the Web or sync the Fitbit app installed on several different phones and tablets. You can also use the Fitbit Inspire HR with a Bluetooth-capable Windows computer. Or purchase an optical dongle for a non-Bluetooth Windows computer.

Beyond tracking your movement and heartrate, some of the things that the Fitbit Inspire HR can do (in conjunction with the app) are:

Setting up the Fitbit Inspire HR

As usual with Fitbit devices, you set up the Fitbit Inspire HR by installing the Fitbit app on your phone – iOS and Android both supported – and following the instructions. It will present you with a list of Fitbit devices to choose from. An animation shows you how to “plug” the Inspire HR to its charger cradle. Then it searches the Bluetooth airwaves for the device. In short order the app found the Fitbit Inspire HR, which responded by showing a four-digital code.

I messed up entering that into the app, but that was fine. It presented a new code a second later and all went well.

The Fitbit logo on the app pulsed for a couple of minutes, and then it was done. The app resynced to the device and we were good to go.

Apparently, you can have some Fitbit trackers connected to your app at the same time as some other Fitbit trackers. But that doesn’t work with Fitbit’s smarter devices, such as the Fitbit Ionic or Fitbit Versa. I was hoping it would with the Fitbit Inspire HR, but no. It’s another exclusive device.

So, as part of setting up I had to say goodbye to the Fitbit Ionic I normally wear. Once again, I do wish it were possible to have both connected at a time. There are times when a smaller, lighter device like the Fitbit Inspire HR is appropriate, and other times when something more stylish like the Fitbit Versa is fitting.

My wife suggested, one morning as we were preparing to go out, that she’d prefer I didn’t wear the Fitbit Inspire HR. You see, I’d been sent one with the white-coloured band and it looks out of place with most of my attire. I figured I might as well take the opportunity to see how difficult it was to switch between two devices.

Switching back to the Ionic only took a couple of minutes, mostly as the app spent the time talking to the Ionic and updating it with the information from its database (including the data it had gathered from the Inspire HR).

But then I had to go into the settings and choose certain preferences, because the defaults had been restored. For example, exercise reminders were back on. And “Walking” was no longer on the list of exercises able to be tracked.

The next day I switched back to the Fitbit Inspire HR. That didn’t go quite so smoothly.

That’s in part because a new firmware update had been released. Naturally I wanted my review to cover the best version of the Fitbit Inspire HR, so I told the app to go ahead. In my experience, you can expect a few updates in the early months after the release of a Fitbit product. As they are experienced in the wild, weaknesses and bugs become more apparent. These upgrades fix those things. The app said that update might take as long as ten minutes.

Perhaps it might have, but something went wrong. It started fine and then my phone display (I was using the Oppo Find X) switched off after the usual interval. But I like to monitor these things, so I switched the phone back on, went to settings and changed the screen-off interval to five minutes, then back-keyed to get out of settings.

The phone presented me with a featureless white screen. When I hit the back-key again, a message popped up, saying I should remain on that page until the update of the Fitbit Inspire HR was complete. So, I figured the app was still running fine, but for some reason the screen refresh hadn’t worked properly.

But then after ten minutes there was no change to that screen and progress bar on the Fitbit Inspire HR’s screen hadn’t changed. I decided to start again. I stopped the app, hoping that interrupting a possibly continuing update wouldn’t wreck things, and restarted it. The Inspire HR still showed the unchanging update progress bar. But the app reconnected to the device and I restarted the update.

It worked … slowly. But finally, after more than 48 minutes, the update was complete.

The Fitbit Inspire HR was comfortable to wear. It only weighs 19.0 grams (compare: 48.4 grams for the Fitbit Ionic and 29.8 grams for the Fitbit Charge 3). It looks like it’s sitting up higher from your wrist than bigger tracks since it is really isn’t very wide. In practice, though, I didn’t notice it at all.

Well, at night the green light from the heart rate monitor would leak out from between device and skin, sometimes quite eye-catchingly.

You scroll down to bring up exercise tracking, bring up the “Relax” function, invoke timers or the stopwatch, and a few basic settings. Scrolling up shows you your exercise stats, heartrate, energy consumption and so on. Holding the button brings up screen settings, shows you the battery charge level and lets you switch notifications on and off.

The “Relax” function runs you through a two-minute or five-minute guided breathing routine, with a pulsing display and wrist vibrations. If you like such things, good for you.

Apart from my few small worries during the update process, everything worked smoothly and quickly.

Fitbit trackers aren’t scientific instruments. They are plenty accurate enough for their purpose, but don’t expect perfectly accurate step counts or heart rates. I walked around the block wearing both the Fitbit Inspire HR and the Fitbit Ionic. On sitting back at my desk, I see that the Fitbit Inspire HR had me walking 1,376 steps, while for the Ionic it was 1,360 steps. Presumably there’s some slight difference in the movement sensors in the two devices, along with the algorithms that do the counting. Both devices were on the same wrist, but the Inspire HR was slightly further down than the Ionic, so it would have been subject to more swinging acceleration than the Ionic. Perhaps that’s why it counted more steps. Still, that’s less than a 1.2% variance. And that’s perfectly fine for overall fitness tracking.

The heart rate variance was wider, sometimes with a difference as much as eight beats per minute. The difference between 55bpm and 63bpm is 15%. Again, not laboratory grade, but good enough to give one a sense of what’s happening in one’s body. I did try comparing against my actual pulse. But you have to sit still for that. In that case, I counted 56bpm, while one said 57bpm and the other said 58bpm. Which said which? Didn’t matter; sometimes one was higher, sometimes it was the other.

I would not recommend purchasing the white-banded unit. But that’s a matter of personal taste. (But if you get it wrong, a different-coloured band will set you back $45!) What I would say is that the Fitbit Inspire HR works well, is nicely compact, and is so light you might as well not be wearing it.

And it provides pretty much the same tracking data as the $400 Fitbit Ionic and the $230 Fitbit Charge 3. The Australian site for the Fitbit Inspire HR is here.

Features
Value for money
Performance
Ease of use
Design
Excellent fitness tracker
Can use to track swimming
Choice of clock displays
Can’t use in conjunction with Fitbit smart watches
Replacement bands expensive
4.2