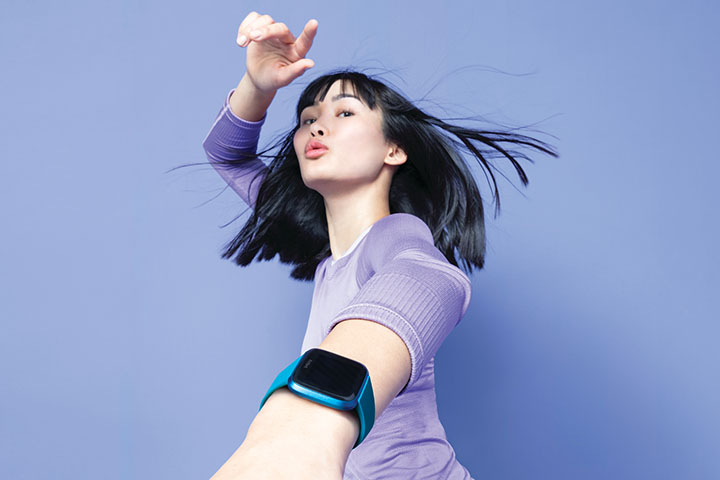 Just under a year ago I was very impressed with the Fitbit Versa smartwatch/fitness tracker. It included a music player – up to 2.5GB of installed music, or via Deezer. Don’t need such things? Then the Fitbit Versa Lite may be for you. You save $50 on the purchase for essentially the same watch. You just lose some of the features, most of which you may well not want anyway.

What the Fitbit Versa Lite has

Indeed, at around $250, the Fitbit Versa Lite is the lowest cost entry point into a real Fitbit smartwatch, as opposed to a mere fitness tracker. Which isn’t to say that it doesn’t track fitness as well.

As with the Fitbit Versa, it features a 24mm by 24mm touch sensitive colour screen. The bezel is square, but with rounded corners. The body is relatively thin at 11.3mm. It comes with silicon-type bands for large and small wrists, with a number of colours available.

The Fitbit Versa Lite has the usual movement and heart rate sensors, and it works in conjunction with your phone – Android or iOS. It can count your steps and combined with your heart rate and data about you that you’ve entered in the app, it can calculate your energy expenditure.

Again using the information it has at its disposal, it can track your sleep patterns … if you wear it at night. Fitbit breaks the patterns down into three kinds of sleep: REM, light and deep and the app can tell you useful stuff about whether your patterns are good or not.

It can gather GPS data from your phone so that, in addition to counting your steps, it can track your route when you’re running or walking. So, you can keep maps showing where you’ve actually been down to the nearest metre or two. This stuff is only kept when you choose to record an exercise, so it isn’t creepily tracking your every movement.

Differences between the Fitbit Versa Lite and the Versa

As with the Versa, it is water-tight so you can go swimming with it. Indeed, it can track your swimming for you – record it, that is. Apparently, unlike the full-blown Versa, it won’t actually count laps. My commitment to this review was insufficient, I confess, to go to a pool to check this out. The weather, you know.

Two other exercise things have been shed from the Fitbit Versa Lite: “On-screen workouts” and “Floors climbed”. The latter is self-explanatory. The first is stuff on the watch which talks you through an exercise program.

But the main omissions aren’t to do with fitness. With the Fitbit Versa Lite you don’t get contactless payments, nor do you get the ability to store and play music. The first may or may not be important to you. If I’m not using a card, I generally use my phone. My understanding is that you can have Fitbit Pay running or Google Pay running, but not both.

As for music … no great loss I’d say. As I suggested in my review of the Fitbit Versa, the whole music-playing thing is a little creaky anyway. I checked it out for the review, and then never once used the capability. Why, when my phone has 256GB of storage and is far more easily managed.

Look, if those things are important to you, pay the extra and you’ll have them.

Oh, and one other difference: the charging cradle for the Fitbit Versa Lite is, well, lighter and smaller than that for the Versa. Oddly, since they’re pin compatible. Fitbit does seem to have this thing about a different charging arrangement for every device.

As far as I could see – and apart from the omissions mentioned above – there were absolutely zero differences in use between the Fitbit Versa and the Fitbit Versa Lite. Rather than retread the same path, I’d suggest you go and read that.

But, in brief, the Fitbit Versa Lite is easy to use. The main screen presents by default a clear digital watch readout, with the date above it and with your choice of fitness count – number of steps that day, for example – underneath. But you can change the face, using the app, to anything from highly utilitarian to uselessly colourful.

And since this is a smartwatch, it supports a bunch of apps. Several are already installed. Of course, Exercise is the main one you use for tracking, but there are also Weather, Alarm and Timer apps. The latter includes a stopwatch. But others include the New York Times, scheduling, Philips Hue smart lighting monitoring and (I think) control, Nest, a World clock and even some games.

You generally control the Fitbit Versa Lite with the single button (this wakes up the phone and returns you to the previous screen) and swipes. Apps are available with a swipe to the left. Summary stats and battery status – it’s rated at four days of life, with which I’d agree – come from a swipe up. Notifications are shown with a swipe down.

Welcome screens give you a brief intro the first time you fire up the watch. However this seems to have been adopted, unchanged, from the full-blown Versa because the very first one talks about music controls, as does the intro in the Fitbit app to your new Fitbit Versa Lite.

I should add one more thing: like the Fitbit Versa, the Fitbit Versa Lite is a much prettier smartwatch than the Fitbit Ionic. Not as powerful, but nicer to wear to events. Which makes it a continuing disappointment that you can only have one Fitbit Ionic, Versa, Versa Lite or Charge 3 linked to your Fitbit app at a time. How much better it would be if you could simply swap to whichever is most appropriate for the occasion.

So, keep that in mind. But if you don’t already have a Fitbit smartwatch (or Charge 3 or Inspire), the Fitbit Versa Lite is an excellent way to get into smartwatches at a lowish price.

You can check out the Fitbit Versa Lite smartwatch (or buy it) at the company site here.