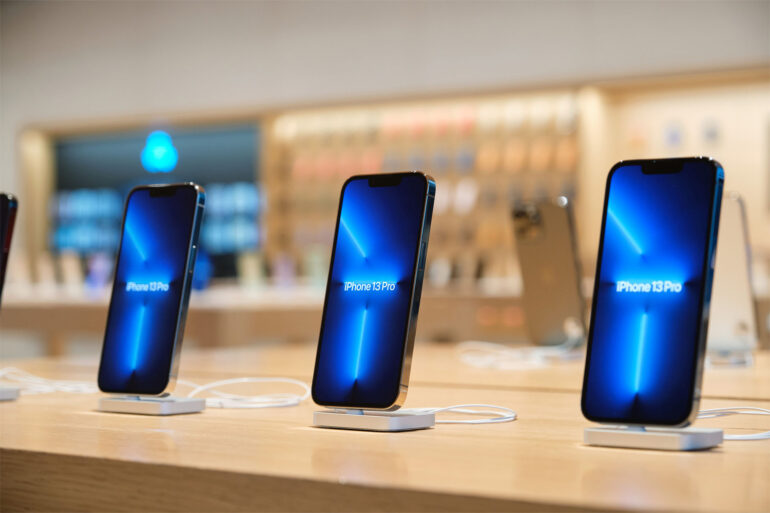 iPhone fans love a good rumour. From the moment the iPhone 13 landed, fans can’t help but hunt for every little hint about what’s going to be different with the iPhone 14. We love iPhone 14 rumours too, so we’ve scoured the web to pull together everything we know so far about what could be changing with Apple’s next big upgrade.

The good news is, after the iPhone 12 and 13 followed the same physical design we could be getting a fresh exterior to shake things up. Excited? Let’s run down what we’ve heard so far.

One of the biggest iPhone 14 rumours is that the infamous notch may disappear, with Apple potentially adopting the ‘hole punch’ design for its front facing camera. Such a design change would require a lot of additional technology adjustments, as the notch area on the iPhone hosts a bunch of sensors that enable depth perception that makes FaceID work so well.

Could these sensors blend in behind the pixels on the screen itself? Or sit at the edge of the bezel? Some suggest a ‘pill’ shaped area may sit alongside the hole punch camera to make it all work. If the eventual reveal introduces a notch-free screen, prepare to hear about some clever engineering that made such a move possible.

This may also be so cutting edge that it is only found in the iPhone 14 Pro model, with the standard iPhone 14 sticking to the existing notch style for now.

Rumours suggest we could still see four editions of the new iPhone 14, but the new line up would see no iPhone 14 mini with focus on two larger sizes – 6.1-inches and 6.7-inches – instead.

This could pave the way for more choice for both the standard and Pro specifications, allowing fans of larger devices to go big without requiring to shell out for a Pro model to get it. In such a world, where ‘Max’ is the larger designation and ‘Pro’ is for higher spec, we may find the series listed as:

iPhone 14 rumours are hinting that this could be the first iPhone to entirely drop the inclusion of a SIM card tray. iPhones have supported eSIM since 2018, allowing your iPhone to be connected to a network carrier without the need for a physical card. If the rumours are true, this could become the norm in 2022.

Some users have enjoyed using the eSIM for their main provider while adding temporary nano SIM cards when travelling and switching as required. So this could be a loss for such users, though they’re far from the typical user out there.

Another big rumour would see the main ‘wide’ iPhone 14 camera lens move from the 12 megapixels found in the iPhone 13 up to a new 48 megapixel sensor. This could enable new features like 8K video recording and, alongside Apple’s powerful image processing technology, it could result in another leap forward in image quality. This may also lead to that iPhone camera bump getting a little bigger once again, but fans don’t seem to have found the bump to be a concern so far.

iPhone 14 rumour: No ports at all

One of the more extreme rumours that has been following iPhone updates for some years already, the iPhone 14 could be the first to stop using the Lightning port – but replace it not with a USB-C port but simply no ports at all. Apple’s adoption of MagSafe charging technology opens the door to all charging via this magnetic attachment and instead it could focus all data transfer on wireless transmission.

When was the last time you uploaded photos to a computer from your phone by attaching it physically with a cable? Technologies like Ultra-wideband can be used for short range high bandwidth data transfers, so Apple is well set to pull the plug forever. But in 2022? We’ll have to wait and see.

Beyond these big ideas there are lots of smaller rumours of more subtle changes in the routine, and we expect to keep hearing many more as the year progresses.

Could the standard iPhone 14 remain on an A15 Bionic chip while only the Pro receives a new A16 update? Could we see a Titanium iPhone 14 offered as special edition hardware for the Pro models? Could ProMotion 120Hz come to iPhone for the first time? And now with COVID shutting down factories in China, would we be seeing delays and even shortages?

When will iPhone 14 launch?

Based on the track record of iPhone launches, the iPhone 14 will launch in either the first or second week of September 2022. With a typical launch event on a Tuesday in the USA, we expect to see iPhone 14 announced on either September 6 or September 13 (Cupertino time) with the phone being on sale the Friday 10 days later. That makes iPhone 14 launch day either September 16 or September 23. We’ll definitely be bringing you all the latest when the news drops!