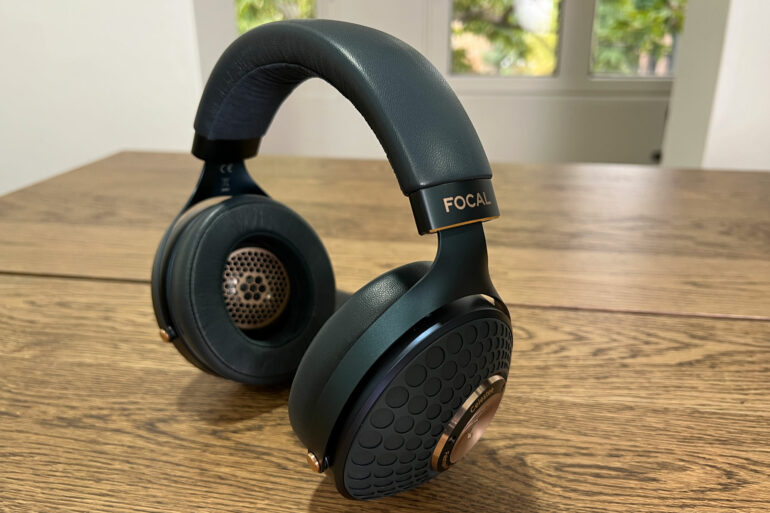 Looks are subjective, but the navy leather and copper accents of the Focal Celestee High-Fidelity Reference Closed-Back Dynamic Headphones are one of the most handsome meetings of bling and classic that we’ve seen.

Left casually on your desk, passers-by might be led to admire your sophistication and even be tempted to touch the semi-aniline softness the Celestee’s earcups and headband. The desire to try them on would be irresistible, and the sensation would be like slipping into silk sheets….

OK, so we’re slightly crushing on the Focal Celestee, but these headphones remind us that superb build quality and materials can be inspiring. Just like the music they’ve been created for.

Of course, cost is subjective too, and while economical compared to the French audio brand’s flagship $5500 Utopia headphones, the Celestee are still spendy at $1399. So here’s why they might be worth it… and how you might justify them to yourself or your other half.

The Celestee are a ‘reference’ headphone, like those used by professional sound mixers and designers. Unlike most mass market headphones which boost or ‘colour’ frequencies to appeal to listening tastes, the Celestee are designed to have a neutral sound; they should add nothing to the sound and take nothing away. The goal is to reproduce sound that’s authentic to the original source, so that what you hear sounds like it did when was recorded in the studio or at the live performance.

Fundamental to delivering this are the Focal’s 2x full-range 40mm electrodynamic drivers, designed and manufactured by the company in France.  The driver’s magnesium/aluminium alloy cone combines rigidity and damping qualities to reduce distortion, with the company claiming a linear frequency response from 5Hz up to 23 kHz. Focal describes the sound as “clean, precise and with good bass extension”.

With the emphasis on performance, you’d expect a cabled connection from Celestee to an audio source – and you’d be right.  While Bluetooth has improved, its high-resolution cred is limited, and wireless transmission still suffers from stutters, drop-outs and interference. That’s no way to enjoy music, especially a library of FLAC, AAC and WAV files. For critical music listening at CD quality and higher, only wired will do.

For connecting to sources, Focal supplies the Celestee with a 3.5mm to stereo RCA cable sheathed in matching navy plastic. To our minds, the 1.2m cable is too short for desk listening, so consider adding an extension cord. A screw-on 3.5 to 6.35mm adaptor is also supplied.

With 35 ohm impedance, the Celestee will be an easy load for low-powered devices such as mobile phones and portable digital players. If your device doesn’t export high-resolution audio, connecting the headphones through a DAC (such as the Astell&Kern AK30) will help make the most of 192 kHz/24-bit streaming from the likes of Tidal and Apple Music.

Oh, and like most reference-grade kit, the Celestee will benefit from a running-in period to stabilise the speaker drivers and get the best performance. This will happen naturally over several hours of play, according to Focal, but you can speed the process by “playing bassy music through them for 24 hours at high volume”.

Of course, headphones are all about personal listening and the Celestee’s circum-aural design allows an almost perfect seal around the ears so that there’s no sound leakage and external noise doesn’t intrude.

The headband and aluminium yoke have a nice amount of flex, and the fit is firm and comfortable. At 430 grams, they may be a bit hefty for extended wear, so it would be a good idea to test this instore. While the Celestee doesn’t fold, the supplied zip-up travel case has a carry handle or you can pop it into a backpack when you need to be on the move.

And now, what about that name? It’s made-up, but with the Celestee’s night-sky and shimmery colourway, there’s a clear ‘celestial’ connection. Heavenly indeed.