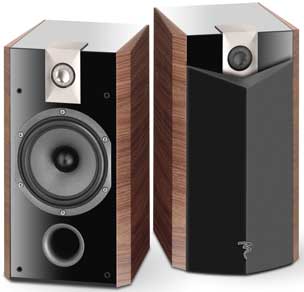 Well, I have to admit that this pair of speakers had me startled for a few minutes… before I’d even plugged them in. I opened the box and before me were the tops of these two largish-bookshelf sized loudspeakers. Upon their marbled-black tops were large orange stickers insisting that the ‘User Precautions’ on page 6 be read. I idly started to peel off one of the stickers, only to find it very firmly affixed! I could see no way of getting it off without causing damage.

But then I realised that it was actually attached to a rather thick transparent film that was protecting the speaker’s piano gloss top (and giving it a marbled appearance). These speakers come well protected.

That includes the aluminium/magnesium inverted dome tweeter. This has a metal grille over its face – removable, but Focal recommends that you don’t in order to protect it. By ‘inverted dome’ I mean that it is concave out, rather than convex, which is Focal’s long-established way of doing things.

Being bookshelf sized, these speakers failed to plumb the extremes of bass, but down to their 50-ish hertz cut-off they were magnificent in the bass solidity and articulation. Only the lack of certain known elements on familiar CDs indicated that they were anything other than large.

I’ve always liked the no-nonsense sound of Focal speakers and these ones were no exception. They delivered an excellent frequency balance, with a slightly forward and very revealing nature. In fact, I felt that they matched the B&W CM1 speakers for revealing the content of the music, especially in the higher registers.

Aside from that super deep bass, you will hear everything on your CDs. And hear it with surprising volume levels because the bass reflex enclosure allowed Focal to tune these speakers for remarkably efficient operation for small speakers, so it was only at quite ridiculous levels that they began to sound a little stressed.