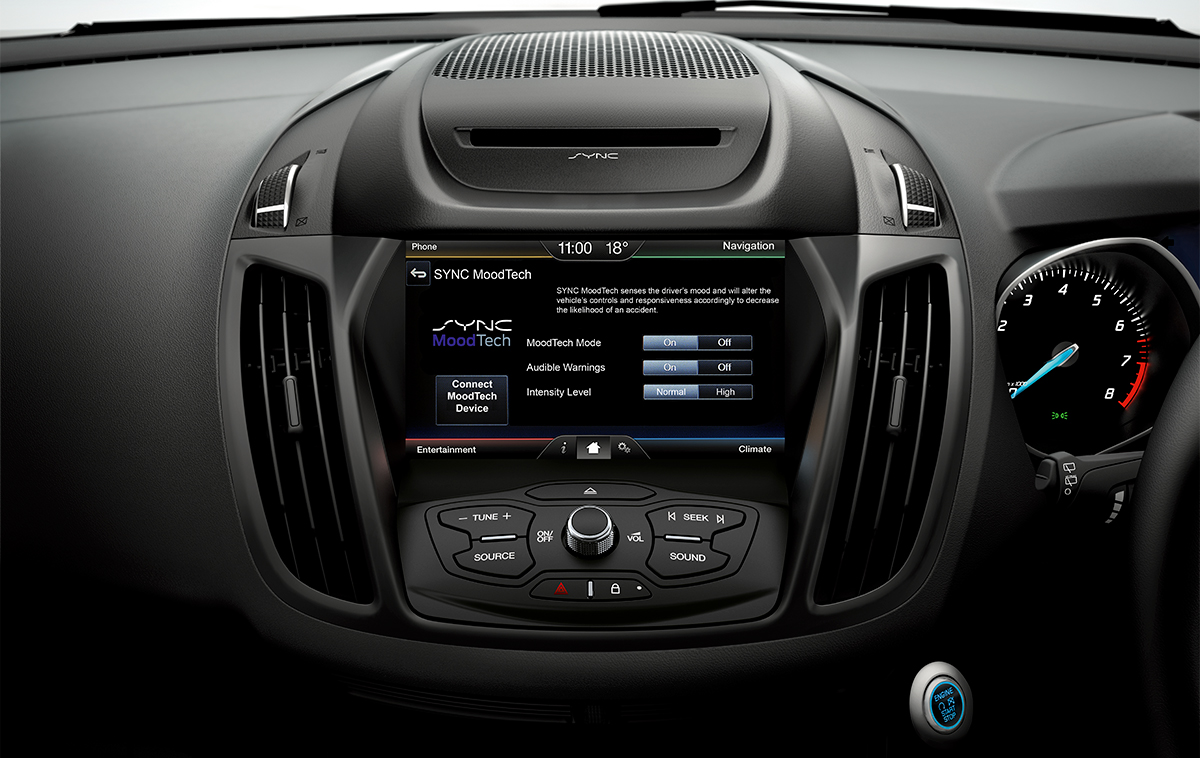 Wearables are the next big thing, evident from even the mouth based gadgets being announced, but what if they could tell your car how you feel?

According to Ford Australia, that’s a distinct possibility, with the company’s Future Technologies Team developing a concept that can talk to a wearable device and Ford Sync2 and Sync3-connected cars to track your emotional state.

Called “MoodTech”, the gadget monitors body temperature while using cameras in the car to track eye movement, with this information being provided to the car to work out your state of mind.

In terms of the sort of things this can do, Ford says that the card can change the responsiveness of the acceleration and breaking systems to keep a driver in an “optimum mood”, while the in-cabin experience can also change based off emotional stability.

“We were inspired by the boom of autonomous technology and personal fitness devices, combining them to create an experience like no other seemed like the perfect fit. For us, driver and passenger safety and comfort is at the forefront, driven by our ‘Go Further’ mantra to innovate the way we move.”

Ford’s team says the combination between the homebuilt wearable and camera systems can detect what it calls a “Mood-Ion” which it sends to the car’s on-board computer to work out and predict mood using advanced algorithms.

We’re told the technology is patented and uses a colour spectrum to work out the mood of the driver, with blue being happy and at ease, purple being tired and fatigued, crimson being heart broken, red being agitated, amber being hungry, brown as confused, white when you’re feeling vain and self-conscious, and aqua when you’re in the mood to sing.

Depending on the spectrum that Ford’s technology puts you in, the inside of the car will change as will the car’s responsiveness.

For example, when it goes crimson for being heart broken and emotionally distraught, the car will automatically search a connected smartphone for music tracks that are upbeat, specifically at 110BPM or higher, while a nominated best friend on the phone will be called for a “surprise call” to lift spirits.

When you’re hungry, the navigation system kicks in and reveals a list of nearby eateries and drive thru options, with Ford saying select cars fitted with a specialty convection oven could be used to bake pies, bread, and cake, though not while driving.

And in karaoke mode — bright aqua, for those playing at home — Ford has kicked in a technology called “Reverse Active Noise Cancellation”, which is like regular active noise cancellation, except it holds everything inside the car cabin so no one can hear you singing loudly.

“This takes the humble mood ring into the 21st century and adds functionality that consumers want and need beyond knowing if they are happy or not,” said Dr. Sweat.

One thing we are curious about is whether Ford’s unique wearable system will work with other wearables out on the market, particularly the newly announced Jawfit Chew which monitors mouth movement.

We’d be curious to see whether the Chew could work with the hungry setting to suggest food types when you’re salivating more, or go out of its way to automatically program in the next closest restaurant or take out place.

Checking with Ford’s people on the matter, they were unavailable for comment about the possibility of connecting Ford MoodTech with other platforms, but said if customer demand was there, it would be willing to look into it.

Availability on this isn’t today, that being said, with Ford suggesting that the Future Technologies Team would likely bring this to markets some time next year.

You better hope you’re ready for it, and if you’re not, the car will play soothing jazz or classical to get you in the spirit of things.

Sadly, cars cannot do what Ford has indicated here, though we love the idea of a Ford Convection Oven. Maybe the team at Ford can work on a small-scale microwave until the convection oven is ready. Or a popcorn maker. We’ll settle for that.