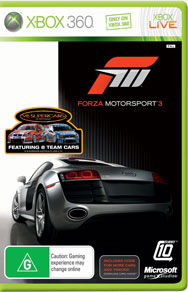 Forza 3 has been in stores for a few weeks now but we’ve only just got a copy to review. For that reason, I’m going to buck the trend a little here and, instead of relating how many cars and tracks there are, how amazingly detailed the upgrade paths are, how there’s really deep customisation and replay options and so forth, which you’ll have read in all the other reviews, I’m going to focus mainly on the core gameplay experience.

The core gameplay here absolutely defines Forza 3. It’s accurate, it’s methodical, almost clinically technical and it feels slow. It’s exactly like watching Steve Davis play snooker, in fact. You can’t deny the inherent talent, but god, is it dull to witness! As strait-laced a racing game as you’ll ever encounter, if Forza 3 were a non-famous person, it’d be your musty, serious, cardigan-wearing granddad who thinks that golf is a bit racy and exciting and whose idea of a good time is a nice game of bowls on a Sunday afternoon.

The visuals are workmanlike, the menus and interfaces are plain vanilla with all the personality of a dentist’s clinic and the sense of speed decided to take the day off and wait for something more exciting to show up. The tracks are devoid of interesting detail, let alone active spectators and the in-car view is shockingly basic. The races take place in a sterile, virtual environment entirely devoid of any hint of personality and the game presentation is geared more to be a showcase for the car-manufacturer sponsors than a jaunt through the thrilling world of motorsports for the player.

Forza 3 sticks to the tried, tested and downright boring method of providing players with a lineup of the world’s dullest road cars to begin your racing career. Forza’s designers reason, no doubt, that you’re a newcomer to their lovely career mode and therefore can’t be trusted with actual racing cars, forcing you to ‘prove’ to some absent but all-seeing over-strict track marshal that you can do the hard yards first in your mum’s Barina. The designers are perhaps forgetting that you’ve probably played about a million racing games before their newest baby and that you’re probably sick and tired of having to grind through the lower echelons of underpowered, non-race-prepped and downright ridiculous ‘learner’ vehicles before they graciously permit you to sample some of the more exciting machines. I mean, this is a GAME, people! I think I can be trusted to take the controls of a, you know, pretend racing car on a pretend racing circuit using a couple of sticks and triggers as my pretend car controls without running the risk of pretend crashing and, well, come to think of it, and what? What’s the worst that can happen?

Even the fleeting taster of Audi R8 action you’re permitted at the outset, before the racing game Nazis dump you back down to the kiddies’ table, feels sluggish and drone-like. There’s just no sensation of speed whatsoever, regardless of which camera view you select, and it really feels like you’re piloting an RC car that’s had sellotape wound round its tyres. Another ‘throwback’ design choice is in the rewards you get for winning championships. After grinding through the World Class E Championship in my Gran’s dowdy Ford Fiesta, what do they give me as a reward for winning? That’s right, another stock Ford, albeit a Focus, which might be a class up at Class C but, as I get it, has lower performance than both my Class D cars. Gee, thanks!

NPC cars (the cars controlled by the console) are timid, exhibit only the most rudimentary AI and, generally speaking, are neither aware nor very smart. There is the occasional ‘off’, where one of them will hurtle into a barrier as if they’ve suddenly lost downforce, but generally they stick religiously to the racing line and show no awareness whatever of your position or behaviour.

Too many console racers share identical programming regarding the beginning of a race and Forza 3 is no different – at the outset you can usually gain 3 or more places with a good start, then get past a couple more at the first corner before you watch helplessly as the front two power away like they’re in a different class of vehicle entirely. Like nearly every other racing game before it, the NPC drivers brake too soon and too much. Mistakes are very infrequent, so it’s down to the old favourite of out-braking them at corners to get past.

Also, just as in GT, it’s often easier to simply use the other cars to brake into big corners, meaning you just power into them T-bone style and use the momentum to bring you around to point forwards again as you hit the gas out of the bend. You come to depend on these tactics, particularly since you start from the back of the grid every career race, irrespective of the position achieved in the previous one. The designers’ ‘top tip’ here is to increase the difficulty level but the difficulty level settings have artificial impact; they simply make your opponents unfeasibly quicker, rather than make them smarter.

So yes, Forza 3 is chock full of cars and tracks. A lot of attention has been paid to precisely replicating handling characteristics of each of the 400 vehicles and I’m sure that the developer has a deeply impressive spreadsheet housing all the millions of parameters to achieve this. The game has incredibly deep customisation options so, if you’re a budding artist, you’ll be delighted with what you can do here and even more so given that you can sell your wares to other players via online ‘Shopfronts’. There’s solid online play including, thankfully, a great two player split-screen mode and, we realise, it has a Free Play mode where you can take any car out on any track, rather than churn through the career mode.

The problem is that Forza 3 has no soul. Motor racing is exhilarating and veterans of race meets will confirm that there’s a tangible sense of tension and excitement over the entire weekend, culminating in the race proper when the cars are on the grid, the spectators are on the edge of their seats and no-one knows precisely what will happen. In single player, at least – things are immeasurably improved online against others, or even in split-screen – Forza 3 reproduces nothing of this atmosphere; unlike, for instance, the racing titles from Codemasters.

So if you seriously believe that Gran Turismo is a ‘racing simulator’ rather than the car version of stamp collecting, then you’ll probably love Forza 3. And stamp collecting. But if you’ve ever been anywhere near a real race day, you’re going to find Forza 3 about as thrilling as revarnishing your deck for summer. If you stick with it, trudge through all the horrible lower levels and manage to reach the better cars, which happens around the time your driver level gets into double digits, Forza 3 maybe improves as a simulator, but not as a game. Multiplayer removes the AI concerns, but doesn’t improve the sense of immersion. The biggest problem is that the first few hours are just no fun at all; you wouldn’t start a new flagship TV series with 3 hours of your most boring content, would you, so why do it with a videogame?