The Frame – Samsung’s Work of Art 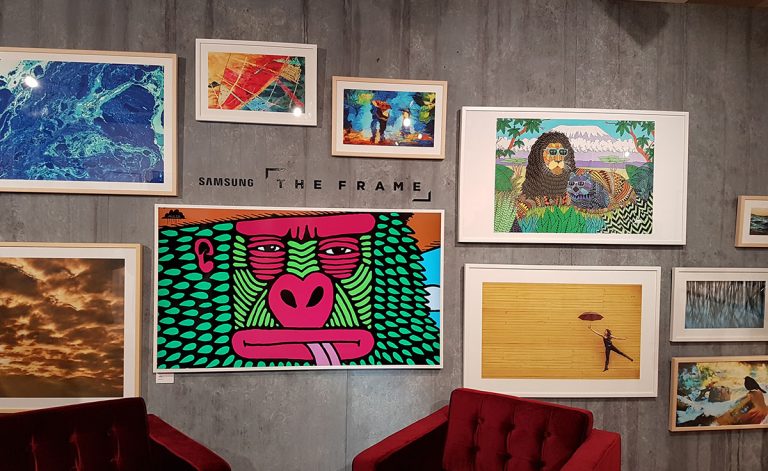 I’ll admit it: I was sceptical. I figured that Samsung’s push into art on a TV would look like, well, art being displayed on a TV. In other words, unimpressive. But at last night’s launch of The Frame, Samsung proved me unduly cynical.

The Frame is a special Samsung TV – available in 55 and 65 inches – that does the usual smart TV stuff, but spends its “down time” as a work of art. Actually, a hundred works of art, with the option of more.

In other words, when you notionally switch it off, rather than existing in your room as a large black slab, it displays a work of art.

So, how do I know it works, that it looks like a real picture with real art, and not just a TV displaying a picture? As I entered the launch venue near the top of Sydney’s The Strand Arcade, there were a couple of dozen works of art on the walls and, damn, as far as I could tell, every single one of them was real. But I’d done a little reading before venturing out that evening so I figured I’d be able to work it out. Some of them, surely, were TVs, not artworks.

And of course, I did work it out. There turned out to be six items that were not paint and paper and and canvas, but glass and copper and silicon. Apparently hanging from the wall, just like the art works around them, canted slightly forward, with the bottom edges pressed against the wall and their top edges leaning forward a dozen millimetres.

The first clue was that one was right in the centre of a display wall, clearly the focus of that wall. I moved close to it and there was a hint of a very slight pattern in what should have been the flat, even surface of the paint work. I peered more closely and, yes, there were pixels!

(By “closely” I mean that I put on my reading glasses and by peering from 20cm away, I was able to make them out.)

Then I noticed on the frame the subtle imprint: “Samsung”. It was on the right side, printed sideways near the top. Yes, that was the TV. But as I stepped back, my confidence waned. It really did look just like a painting, or perhaps a print. Under glass, to be sure, but so were all the “real” paintings and prints.

Later, as I wandered the hall and examined things closely, I found some more “tells”. The most obvious one: the underside of the picture frame at the bottom had cut outs to provide access to some connections.

Obvious, that is, if you think to bend over and look up at the underside of an artwork. As one does.

So, colour (ha, ha!) me impressed. I’d note that this isn’t the first time that Samsung has been doing the art-by-TV thing. It must have been ten years ago when premium Samsung panel TVs came with art works available for display. I’m stretching my memory here, but I think this may have even been before ubiquitous TV network connectivity. I could be wrong on that. I do remember that the pictures were a mixture of meh, and classics, but there were only something like a dozen, and they really did look like a TV displaying a picture.

Things are very different with Samsung’s The Frame.

Okay, I know, people come here not to read our reflections on art, but our expertise on TVs and other gadgets. So let’s get into the nitty gritty of how they do it.

There are two aspects to this: packaging and technology. The technology is Samsung’s Premium UltraHD TV panels. No, not the QLED ones, but the level just under that. I’m not sure that QLED is actually needed to deliver on this front.

Back with those old TVs, colour and brightness and resolution were all severely limited. They looked good to our eyes back in those days because they were much better than what had gone before. But they were still a long way short of providing the wider colour gamut and contrast of reality. Today’s Samsung panels are much, much closer to that. In particular, Ultra High Definition hides all evidence of digital reproduction, unless you’re a nosy tech writer sticking his nose just about on the panel. The image looks smooth. Smooth.

And colour. While not at reality, and while the coverage of the colour gamut our eyes can perceive looks weak in numerical terms (around fifty per cent), Samsung’s premium models cover the great majority of the important cover range (defined non-scientifically by me as the colours that are most important in our visual colour space).

So that’s a big part of why these seem to make art works in digital form look analogue, look real.

The other thing that, I think, does the trick is that the TVs pay attention to what’s going on around them. Specifically, they adjust their brightness according to the ambient light. At the launch I suspect they were running somewhere near maximum brightness because we were in a brightly lit room with white walls, white ceiling and light wood-grained floor. (It was, my oppressed ears remind me, acoustically “bright” as well). But in more normal environments they’ll likely turn themselves down and thereby keep the apparent contrast up.

But the packaging shouldn’t be under-estimated. That provides the psychological pre-conditions for one to accept something for what it seems to be. Physically, these look exactly like pictures hanging on a wall.

They are, I’d guess, about 35mm thick and the frames around the pictures are around 14mm wide, and the same width on all four sides. The frames themselves are changeable. They snap onto the standard black frame, held in place by magnets. Three choices are available: white, walnut and “beige wood”. Well, four, because you can just stick with the standard frame if you prefer. The two wood style finishes are, I’m told, actual wood veneers. They certainly looked like it.

The underlying TV has been re-designed physically to fit into what is essentially a rectangular prism that is 35-ish mm thick. There’s no need to have tapering edges to make the TV seem thinner than it is. Samsung’s invisible wall mount (Samsung calls it “No Gap”) is used. This connects not to the back of the TV body, but into an inset section so that the TV can be held quite closely to the wall. It’s that which allows the TV to adopt the posture of a hanging picture, sans the wire above it.

Much of the electronics from the TV has been offloaded to an external unit called “One Connect”. A five metre optical cable is also supplied with the TV (along with the No Gap wall mount and a “basic stand”). This, along with the power cable, can be set into the wall and plastered over so that there’s no apparent evidence of a connection at all.

The Frame operates in the usual way as a smart TV with various devices able to be plugged into its “One Connect” external control and electronics box. When it’s “off” it can run the artworks. In addition to tailoring its brightness according to ambient light, it switches the art off entirely if no one’s around.

You can use your own pictures, apparently, in the “art mode” instead of the hundred provided with the TV. Or you can pay a subscription of $5.99 per month to use any of the additional images (that is, beyond the hundred supplied with the TV) available in Samsung’s online “Art Store”. If you like one in particular, you can pay a one-off of $24.99 to purchase rights to use it forever.

In addition, a “Studio Stand” – essential, a slimmed down artist’s tripod – is available as an option for $799. Before scoffing and dismissing this entirely, do note that it incorporates cable management so that the optical comms and power cables emerge not from the back of the TV, but out a foot of the stand. A 15 metre optical cable is also available as an option in case the included five metres isn’t long enough.

Enough of the nuts and bolts and dollars. I find myself returning to the startling realisation that The Frame provides active artwork somewhat difficult to distinguish from the real thing.

At one point I played with the remote control on one of the TVs. It works in RF as well as IR, so it doesn’t need to be pointed. I counted up the art works available, and it was 101. I think; I didn’t do a check count. There were no classics there. All were modern. Which isn’t to say bad. Most looked very nice to my uneducated eye.

I dialled up a Blaise Rosenthal abstract work and set it to display and thought that it was perhaps less convincing as a real painting, rather than a TV display. But then I returned for fifteen minutes to writing all this stuff about the TVs until the Rosenthal caught the corner of my eye. I looked again and doubt again disappeared. This thing looked like a real – not quite painting, but certainly at least a fine print.