Freeview FV – now your TV goes wherever you go 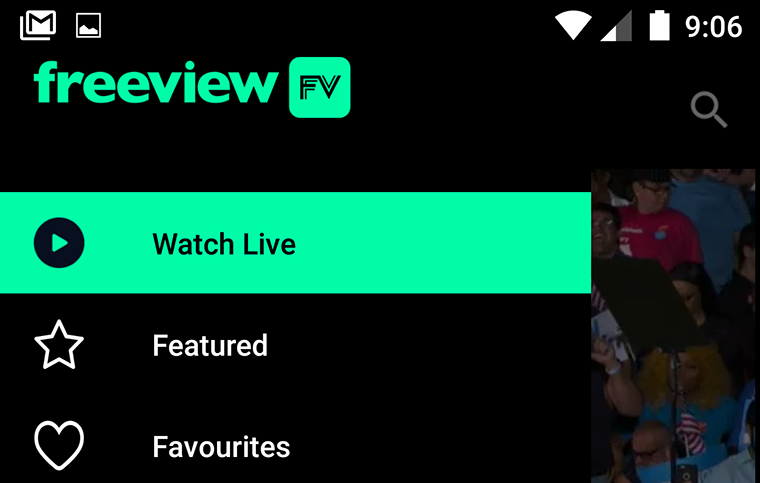 As we mentioned last month, the body representing Australian Free to Air TV stations is releasing – has now released – an app called Freeview FV. What does it do? It lets you watch your broadcast TV stations on your mobile device, anywhere you have an Internet connection … including mobile broadband.

I should make sure I represent it properly, so let me copy from Freeview’s fact sheet:

Time for a quick review. I downloaded and installed the Freeview FV app and got right into it. I used the Android version. There is also an iOS version. Note: the iOS version works with Apple TV for “casting” wirelessly to the big screen. The Android version does not allow you to cast to Chromecast.

When you first start it’s in “Watch Live” mode, listing stations, three to a page, each represented by a static image from what’s showing and some text indicating what station it is. You scroll through the list with a flick of the finger and start your selection with a tap on the play button for the relevant one.

But it can be inconsistent. Do note, I live out in the “Regions” where are stations are kind of compatible with the city networks, but under different ownership. Perhaps things work a little more smoothly in a big city.

ABC: I touched the Play button and within about two seconds it was streaming live in its position across the top of the screen. The phone I was using was Android with a QuadHD AMOLED screen, and the picture quality looked excellent. I rotated the phone and the picture expanded to take up the full landscape screen. I sent a few screen shots off to my computer, and it looked reasonable even on a much bigger screen.

SBS: Pretty much the same. By ABC and SBS, I also mean their related channels: things like ABC News 24 and NITV.

Channel 9: when I touched something to play, the app sent me off the Google Play Store, specifically the page therein to download the 9Now app. Apparently the Freeview FV app itself cannot or will not play the Nine content directly, at least out here in the telecommunications sticks. Once you’ve installed 9Now, the Freeview FV app takes you to it whenever you choose a Nine network program from “Watch Live”. 9Now requires you to log on the first time, creating a user ID.

TEN: Hmmm. All I could get was “This show is currently unavailable”. On all the TEN-related channels. I downloaded the TenPlay app and this worked fine, so it wasn’t geoblocking at work.

Weird things have happened in at least this region (southern NSW) in recent times. A few months ago what we had come to think of as “our” Channel 10, known as the Southern Cross network, and “our” Channel 9, known as WIN TV, swapped. That is, all the Channel 10 content went from Southern Cross to WIN, and all its Channel 9 content went the other way. That raised the possibility that this was limiting the effectiveness of the Freeview FV app. Neither Southern Cross nor WIN supports such modern things as catchup TV, nor for that matter Freeview functions on the TV itself, beyond basic EPG data.

So I asked Sydney colleague, Valens Quinn, to check out Nine and TEN and the behaviour was the same for him.

I do hope both Nine and Ten end up being able to be streamed from within the app. It would be a little move convenient and just, somehow, more elegant.

Do note that streaming, particularly if you’re streaming via Broadband, could end up costing you if you overdo it. Happily the app provides a video quality setting which you can reduce the default cap on the bitrate from 1200 kbps to 700kbps. The app also warns you if you switch from a WiFi connection to 4G.

The information provided to media says that “A 30-minute program will consume approximately 200MB of data.” The higher upper limit provided in the app actually works out to up to a maximum of 270MB.

It turns out that the Freeview FV app doesn’t really provide catchup services. It provides hooks into other apps which provide catchup services. At least it does for ABC iView, SBS On Demand and PLUS7. To access them you need to select a channel, hit the “i” button and scroll down to the link to the app. In addition, a link to the iView app appears in the “Favourites” screen of the Freeview FV app, but none of the others appeared. Note, you will need to install the catchup apps for them to work, although at least the SBS link could take me instead to SBS On Demand using my browser.

As I’ve just implied, there’s a “Favourites” section (this is Australia so it’s spelled correctly) to which you can add programs by hearting them from their various information pages. Those are best accessed from the nicely laid out and organised Guide. Touch an item in the guide for that additional information. You can search for programs, even with partial text in the body of the title, and set up reminders so you don’t forget to watch something.

As I said, I’d like some closer integration, and obviously TEN needs to be sorted. Nonetheless, the Freeview FV app is a nice support for those who want to make sure they can catch their favourite programs (assuming that they’re on channels that work) even when away from a TV. Just be careful when you’re on 4G: about two and half hours of viewing will use up a gigabyte of your data allowance.