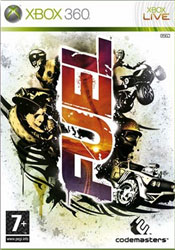 An ambitious largely off-road racing game that offers players thousands of virtual square miles of varied terrain, Fuel’s legitimate claim to fame, or at least world-record breaking, is that the 5,560 square miles (14,400 square km) created have been officially recognised by the Guinness World Records Gamers Edition as being the largest playable environment in any console game, ever.

That alone wouldn’t necessarily sell this game, but Fuel is also host to a huge array of interesting vehicles, comprising motorbikes, ATVs, buggies cars and trucks that, crucially, exhibit quite different handling characteristics. The biggest choice you have to make is whether to go with a predominantly off-road or road-going vehicle, but there’s actually much more subtlety at play than that, so you’ll quickly gravitate to a handful of favourites to get through the races.

Online play is awesome, especially if you manage to play with a friend (not as easy to make work as it should be) and even just tooling around in the huge environment, barrelling over rough terrain, dropping off cliffs and hammering up embankments in the free-ride mode can be a riot.