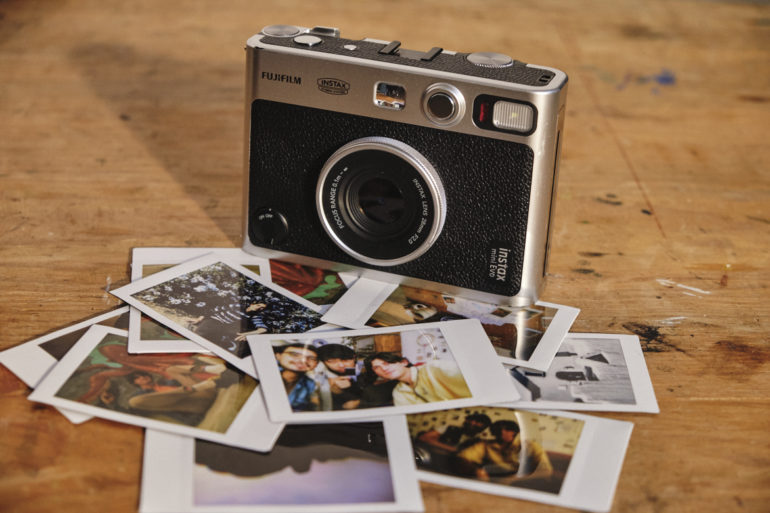 Capturing the moment, the Fujifilm Instax Mini Evo takes photography back to the future.

While digital photography is certainly convenient compared to the old days of film cameras, one of the downsides is that your best photos can stay stuck on your devices and never see the light of day. That’s why camera makers have revived the idea of Polaroid-style instant cameras. With a built-in printer, they can spit out a printed photo on the spot.

The $299 Fujifilm Instax Mini Evo looks like an old-school camera, with a traditional analogue design and controls. But it has a 3-inch screen on the back and offers features intended to appeal to the Instagram crowd.

The camera offers a choice of 10 lens effects including Soft Focus, Fisheye and Light Leak, which can be accessed by physically turning the camera lens. There are also 10 film effects, including Monochrome and Retro. By combining the lens and film effects, users can get creative with 100 different options.

Budding photographers can also crop and rotate their images, as well as tweak the brightness, contrast and saturation, directly from their smartphone using the Instax Mini Evo app – available for iOS and Android. The app can also act as a remote shutter button when capturing group photos.

Unlike some instant cameras, the Fujifilm Instax Mini Evo is a hybrid. As well as taking and printing photos, it can also act as a smartphone printer via Bluetooth. Plus, photos take on the Evo can be transferred to a smartphone for sharing on social media.

Also keep in mind that you’re paying $19.95 for 10 sheets of Fujifilm Instax Mini Stone Gray Film paper. Per photo, that’s a lot more expensive than getting your digital photos printed at the shop.