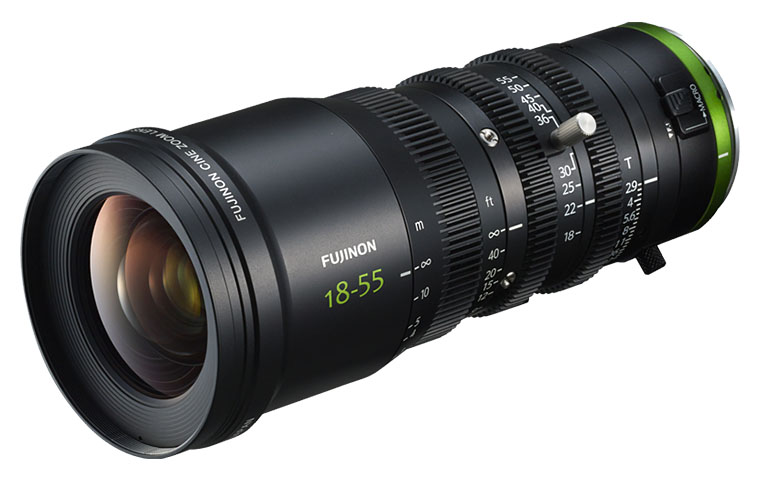 With the affordable cinematography revolution of recent years, anyone can start making movies, right? All you need is a couple of thousand dollars worth of interchangeable lens camera, with support for 1080p24 or better video, a good script idea, and you can do what Hollywood does. Right? Wrong. Fujifilm aims to fix that with a new, relatively affordable cinema lens for Sony E-Mount cameras (and soon for Fujifilm X-Mount cameras): the FUJINON MK 18-55mm T2.9 cine lens.

So what’s holding you back from achieving Hollywood-quality results? Even forgetting about all the other stuff associated with making movies, a modern camera, out of the box, can do only a tiny bit of what Hollywood does. It can do that tiny bit just about as well as much of what the professionals do, but that tiny bit is mostly boring.

You see, the lenses used in still photography and those used in cinematography have very different characteristics, because there are very different demands on them. Still camera lenses are all about capturing the briefest instant of time. Lenses suitable for cinema work capture what’s happening during a period of time. So they need to be able to zoom under the most precise control, without changing focus, and without the image shifting laterally or vertically within the frame.

If all you’re interested in is shooting a fixed object at a fixed focal length from a fixed position, then your standard camera lens will be fine. But if anything’s moving, everything changes.

The focus must be repeatable, and calibrated to the distance measurements printed on the focus ring. The manual focus adjustment of an autofocus digital still camera lens isn’t mechanically connected to the focus mechanism; it controls a motor which adjusts the focus and is mediated through control electronics. Typically that electronics “helpfully” take into account the speed at which the focus ring is turned, so the focus tends to be different even though the same rotational position might have been chosen, simply because how how quickly the ring was rotated.

And as for image shift, stability is vital. Imagine a slow zoom in on the couple during a romantic scene, and as the zoom finishes the whole picture jogs a tiny amount to one side. Talk about taking the audience out of the movie!

And then there’s iris control. In the still camera world it’s called aperture and it’s controlled in one third f-stop steps with clicks marking each position. (As with everything here, there are variations of course, but what I’m describing here is the norm.) You set the exposure using, in part, an appropriate f-stop and press the shutter release. Cine lenses may require the “aperture” to be smoothly varied over time while shooting. So no fixed positions. No clicks. Just smooth and continuously variable, with a direct linkage between the iris and the control ring.

Those are all attributes of the new MK 18-55mm lens. As the name suggests the lens offers a 3x zoom, but Fujifilm has designed and manufactured it using cine lens technologies to avoid the drawbacks of still camera lenses.

The f-number for the lens is f/2.75 while the T number (which takes into account both the maximum amount of light permitted by the aperture, and the amount of light which actually makes it through the lens elements) is T2.9. It is designed for APS-C sized sensors (24.84mm by 13.97mm, diagonal 28.5mm in 16:9 aspect). The FUJINON MK 18-55mm T2.9 cine lens is a touch over 206mm long and weighs nearly a kilogram.

The main problem with cinema lenses is that they cost a ridiculous amount of money. I mean tens of thousands of dollars. This one has been designed to be relatively affordable. Pricing in Australia is set at $5000, plus GST, which makes it $5500 in total. That’s pretty impressive given that the overseas price has been mooted to be $US3,799.

The FUJINON MK 18-55mm T2.9 cine lens will be available in March this year.