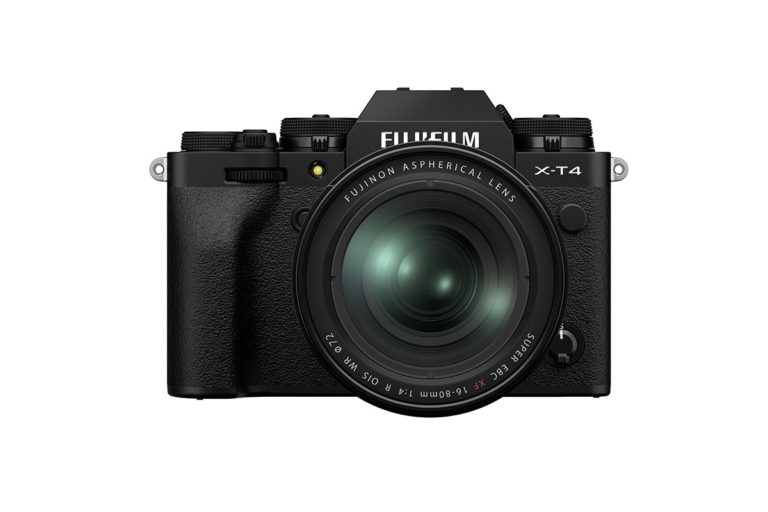 Do you like dials on your camera? I do. And so does Fujifilm. That’s part of the reason I find the Fujifilm X-T4 such a delightful camera.

About the Fujifilm X-T4 camera

Unusually for a high-end camera company, Fujifilm doesn’t have on offer a full frame model. “Full frame” means a sensor roughly the same size as a 35mm film frame. The general advantage of full frame over any other frame size is that they conform to the instincts of photographers who learned on said 35mm film cameras. Instead Fujifilm has two lines of high-end cameras. Its GFX System cameras are medium format – their sensors are 70% larger than full frame. They cost a bomb and some have a resolution of over 100MP. Its X System cameras uses an APS-C sensor. This is 23.6mm by 15.6mm, compared to 36mm by 24mm for full frame. As the name suggests, the Fujifilm X-T4 is in the X System. And, indeed, it is the latest premium model in that system, stepping up from the previous top-end model.

This latest X System camera features a 26.1MP sensor. This uses Fujifilm’s X-Trans colour arrangement which reduces the likelihood of aliasing and therefore allows Fujifilm to dispense with a digital low pass filter. Aliasing is where the grid pattern of a modern device interacts with any regularities in the subject matter, causing all manner of visible distortions.

The sensor is also back illuminated, which means that the wiring is behind, rather than in front of, the light-sensitive elements of the CMOS sensor. That typically increases sensitivity by around half a stop.

The Fujifilm X-T4 is the first of the X-T series to include in-body optical stabilisation.  While the X-H1 had it earlier, Fujifilm has upgraded the system to use magnets rather than springs, allow a smaller, lighter system. Fujifilm says that it provides 6.5 stops of stabilisation (up from 5.5 stops).

So what’s all this about dials? The top of the Fujifilm X-T4 has three obvious dials, but underneath two are a second layer. From the left, the top dial is ISO. Underneath that is drive mode – bracket, burst, single shot and so on. Just to the right of the viewfinder is shutter speed on top. Both this and ISO are lockable via a push-button in their middle. Underneath that is a switch between movie and still mode. The right-hand dial is exposure compensation, marked in 1/3rd stop steps from -3 to +3. This one doesn’t lock, but its clicks are sufficiently strong to make it unlikely that you’re going to accidentally shift it. Indeed, in the 957 photos I took, the only time I had an exposure compensation problem was when I’d allowed a stop more light in to deal with a particular scene, and then forgot to return it to normal.

All those dials are old-school stuff, and I like it. You may have noticed the absence of aperture adjustments in this list. Don’t worry, they’re rings on most compatible lenses. (The exceptions using one of the thumbwheels on the camera body.) The ISO and shutter speed dials have an “A” marking. That’s for automatic of course. The lenses have an “A” setting for aperture. Put everything to “A”, and the camera is fully automatic.

Focusing on the Fujifilm X-T4 camera

Well, focus is separately settable. A three-position switch on the front of the camera lets you choose automatic focus, continuous automatic focus (this adjusts as the distance to the subject changes) and manual. When set to manual, a ring on the lens makes the adjustments. There’s also the all-important auto+manual focus setting. The camera focuses automatically, but while holding half-shutter you can tweak it manually. Useful, for example, to shoot a bird who is three branches back on the tree.

There are also various modes to assist your manual focus (or your focus tweaking). These include an old-school split image

The camera can charge its battery – an upgraded model in this camera – via the USB Type-C connection. It’s good for better than 450 photos, depending on the setting, or 85 minutes of 4K video recording.

It has two SD card slots. These are both rated at UHS-II speeds. The camera supports Wi-Fi (2.4GHz only) and Bluetooth. It has a Micro-HDMI connector, along with a 3.5mm stereo input for an external microphone for video recording. You can switch that input to line level so you can use it with quality external microphones plugged into a pro-level microphone preamplifier.

There’s also a socket for an optional remote release. The shutter release button also looks to have an internal thread which is likely compatible with an old-school mechanical remote shutter release. Sadly, mine has gone missing so I could not confirm this.

The camera is bundled with a USB Type-C charge cable and a 5-volt, 3-amp plug pack for in-camera battery charging. No external charger is supplied. Also included is a small USB Type-C to 3.5mm analogue audio adapter – a DAC in other words, so that you can listen to your recordings with headphones.

Lenses for the Fujifilm X-T4 camera

Serious interchangeable lens cameras have a lot of lenses for you to interchange. For the Fujifilm X System, there are 18 prime lenses, ranging from 14mm wide angle (21-mm equivalent) to 200mm (300-mm equivalent), and 13 zoom lenses (plus two cinema lenses). Apertures go down to frankly shocking f/1.0 prime.

In practice, with the Fujifilm X-T4 you can approximate things like lens lengths in 35mm terms simply by multiplying by 1.5. Thus, a 50mm to 230mm telephoto lens – one of the lenses I used on this camera – is roughly equivalent to a 75mm to 345mm lens on a full frame camera. I’ll return to that lens because it is quite an astonishing value proposition. I also used a borrowed middling zoom lens, running at 18mm to 55mm with a maximum aperture of f/2.8 to f/4.0.

Fujifilm supplied me with two interesting lenses: a 56mm (84mm-equivalent) f/1.2 prime lens and a chunky wide-angle zoom: 8mm to 16mm, or 12mm to 24mm equivalent. Three of those lenses are quite expensive. But the zoom telephoto is the exception. It sells for just $300. It seems to be a bit plasticky in construction – although not obviously so – yet it includes its own optical image stabilisation. And it takes really quite nice photos – especially in the centre of the image. Seeing as how lenses for quality cameras are typically a thousand dollars or more, it’s great to see this kind of value.

There was one physical layout issue. One of the shortcut buttons is on the front of the camera, up and to the right (considered from the user’s point of view) of the lens. When I first started using the camera, just about every time I picked it up to take a shot, a menu would pop up in the monitor and viewfinder. It was a menu for the exposure compensation bracket settings. I often have a camera set to exposure bracketing so I can choose the best brightness/contrast balance for the final result. (In the end, I found that the middle setting of the Fujifilm X-T4 was so often spot on, I ended up abandoning bracketing.)

This menu only appeared when I had the mode dial set to exposure bracketing. It turns out that front-mounted shortcut button fell under my right index finger and this invokes bracketing options when you’re in bracketing mode. I learned to keep my finger away from it, but since it was actually smack in the natural place for my right index finger to fall, that probably wasn’t ideal placement.

The learning curve on this camera is fairly steep, in large part because it is so very powerful. With great power comes a lot of controls and settings. It will take you a while to learn where all the important things that you may want to adjust are hiding. But because of that great power, I was able to switch off the operation of that front button so that it no longer bothered me.

The control with which you interact the most is the shutter release. The release on this camera was just about perfect. Pressing to the autofocus point, and then holding there, was truly easy. All those dials meant that all the other most common things I wanted to do were right there, just a twist of a dial away. Remember, with this camera you can just make it fully automatic by setting all the controls to “A” for auto. Want aperture priority, then you just adjust the aperture. Want shutter priority? Adjust that.

The cheap telephoto zoom lens doesn’t actually have an aperture ring. No problems. For this lens you just turn the front control wheel on the camera instead.

The rear monitor now doesn’t just fold out. It’s on a fully articulated arm, which gives enormous flexibility in camera angles when you’re framing your shots.

Finally, a camera grip is available as an optional extra. This can hold up to two more batteries, essentially tripling the number of photos that you can take.

Some pictures with the Fujifilm X-T4 camera (click to enlarge)

Last week it was overcast at the historic Everglades gardens in Leura, New South Wales. Which made it just about the perfect light for photos. I used the 8-16mm wide angle as I wandered around (1/70 sec, f/2.8, ISO 160, 16mm):

Turns out that security gets twitchy if you spend too long taking photos of Parliament house. It was worth the bona fides-checking encounter with the people in blue for such a lovely subject (1/1500 sec, f/5.6, ISO 160, 8mm):

Ah, in-camera panorama. So, so disappointing. Oh, it looks okay here, but it’s only 6,400 pixels wide and 1,440 tall. Kind of, what’s the point? (Ooh, I see I was critical of the X-T3 for exactly the same reason.) My old Samsung Galaxy S6 would stitch together pictures that ended up greater than 20,000 pixels wide, and looked great when printed out on a roll-paper photo printer. If you want real panorama shots, eschew in-camera and stitch a bunch of photos together using your favourites software. Use manual settings and focus to make sure the shots are consistent (1/220 sec, f/22, ISO 320, 16mm):

There’s no doubt about it, the Fujifilm X-T4 is simply a great camera. Full stop.

Features
Value for money
Performance
Ease of use
Design
Takes great photos
All those dials!
Enormous flexibility
Great range of lenses
Why is the panorama mode downscaled to only 6,400 pixels wide?
4.7