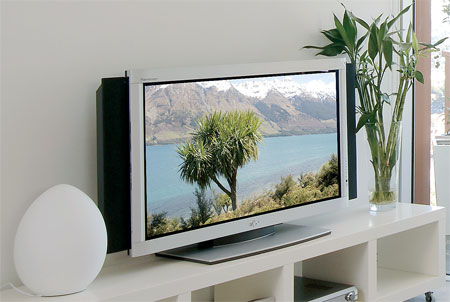 Fujitsu has long had a name for its high-quality plasma displays. A big part of that is that it manufactures its own panels (and OEMs them to other companies). The Fujitsu Plasmavision P42HHA51AS is the latest development in its line of 42 inch (106 cm) high-resolution plasma displays.

The panel featured in this display offers a resolution of 1024 by 1024, providing one-third more pixels than most high-resolution 42 inch displays. That’s about all that can be said of firm facts and figures about the panel, because Fujitsu doesn’t publish figures for brightness or contrast ratio, arguing that there are no applicable industry standards for proper measurements of these. And it has a point.

This is, note, a display, not a TV. There is no TV tuner built-in, nor are speakers or even a desktop stand included in the price. Both speakers and stand were provided for the review and their styling blended attractively with the display. But expect to pay $499 each for these. If you’re wall mounting the panel and using it with a home theatre receiver, neither will be required, so some will find this absence an actual benefit.

The external signals can be supplied by composite video, S-Video, component video (there are two sets of inputs for this), or HDMI. All current high definition standards are supported, up to 1080i, on both the component video and HDMI inputs. There is also an analog computer socket, which seems very common in plasma displays, although the home user would be unlikely to require this.

There are no front panel inputs. All the sockets are at the rear, which means the temporary or casual hookup of games consoles, camcorders and headphones will be fairly inconvenient.

Fujitsu seems rather confident of the quality of its display panels, having for several years charged a premium over the competition. Thus, even though this is a display and not a TV, it sells for nearly $6,500, while most other brands of high-resolution 42 inch plasmas currently sell for between $4,500 and $6,000.

But Fujitsu’s confidence is not misplaced. This display produced the best picture I have yet seen on a 42 inch plasma. This wasn’t due to superlative specification in some particular area. For example, the subjective contrast ratio was about the same as other solid performers from the genre, with good black levels but still a little glow appearing when the room is dark. Nor indeed is it due to offering ‘more colours’. I defy anyone to pick the difference between the billion claimed by Fujitsu and the half billion claimed by, say, Samsung. It’s really to do with how Fujitsu has brought everything together, with a silky smooth translation of the input signal to the display panel, with colours rendered with supreme accuracy, and the finest of transitions in areas of colour graduation. The AVM circuitry worked wonders on motion, providing clean and precise movement of characters across the screen.

With the Fujitsu Plasmavision P42HHA51AS, you pay a monetary premium, but in return you receive premium quality.

Overall
Features
Value for money
Performance
Ease of Use
Reader Rating0 Votes
Superb picture quality, in colours, movement and scaling. Especially attractive to those who wish to use with a high-quality home theatre system.
Lacks some facilities available from the competition, including speakers, PIP, desk mount and TV tuner. No 4:3 mode on high-definition input.
4