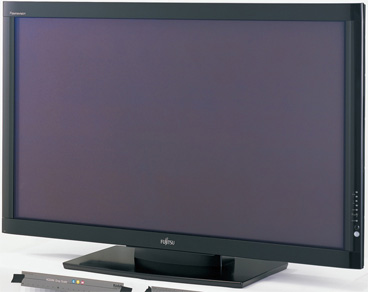 The Fujitsu Plasmavision P50XHA58EB is a display, not a TV. While now rare, there are things to be said for dispensing with ‘TV’ features, especially when the plasma display is of such high quality as this one.

The display uses one of Fujitsu’s own 50 inch (127cm) 16:9 plasma panels. This is a high resolution – although not true high definition – panel, offering 1,366 by 768 pixels. So far as we are aware, there is still only one true high definition plasma display available (with 1,920 by 1,080 pixels), so this technology is lagging a little behind LCD on this front.

Where it makes up for it is in black levels. Fujitsu is loathe to publish figures for contrast ratio and brightness levels, since these can vary hugely depending on subtle differences in the means with which the measurements are conducted.

Since this display is just that, you must have other devices to plug into it. In addition to a disc player, you would require a (preferably) high definition digital TV tuner. You can purchase attachable speakers as an option, but in my view that would be a betrayal of a panel of this quality: it deserves loudspeakers and a sound system of equivalent, that is to say excellent, quality.

However, it does have one concession to user convenience: an ambient light sensor, to which it responds to brighten or darken the overall output in order to produce a suitable brightness for your viewing environment.

There are two quite distinct aspects to the performance of this display. One is the panel itself, while the other is the signal processing electronics.

The plasma panel in this display is easily the best of its class I have ever seen. The black levels are near CRT TV levels of darkness, with subtle graduations of near-black greys nicely distinguishable. The brightness of the panel, as required, is plenty even for a well-lit room. The colours were glorious, with a depth and finesse and accuracy that, along with the black levels, left all LCD TVs for dead, and put it ahead of other plasma units.

The processing electronics – which take the incoming video signal, prepare it for display and scale it to match the panel’s native resolution – were a different matter. Oh, they were okay for the most part, but they didn’t really stand out ahead of the competition’s.

For example, when I fed an interlaced signal from a DVD player in analogue format, it treated it invariably as though it had been shot on a videocamera and required harsh deinterlacing. Even if the DVD was actually film-sourced, and consequently inherently progressive. This damaged the picture quality.

The scaling was okay with progressive scan HDMI input, but less impressive with 1080i input from a HD DVD player. Much, much better results were achieved when I used an external scaler.

Finally, the display will not accept 1080p signals, so you can’t bypass its deinterlacing circuitry.

The Fujitsu Plasmavision P50XHA58EB has a best in its class plasma panel, but merely adequate electronics. With an external processor to do that work, you will get the best plasma picture on the market, short of the rare true high definition models.