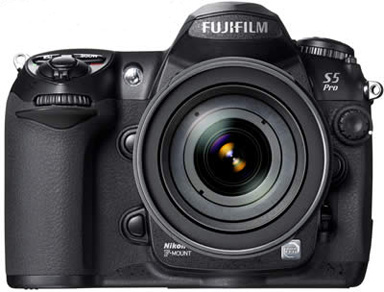 Development in compact digital cameras seems to have slowed, while advances in digital SLRs are barrelling ahead. In DSLRs, Fujifilm has many followers, not least due to its Nikon F mount lens compatibility.

As a camera, with pro ambitions, the magnesium alloy body assures toughness in the field, along with moisture and dust-proofing. In the area of image capture the S5 Pro takes a different approach in using a Super CCD SR Pro that employs double pixel technology: 6.17 million ‘S photodiodes’ (normal range capture) and 6.17 million ‘R photodiodes’ (highlight capture) make a total photodiode count of 12.34 million. The benefit is increased dynamic range in the captured image, along with ‘major’ reductions in noise on long exposures and a decrease in the moirÃ© effect at high resolution.

As some other makers address user demand for a live view on the rear LCD screen while lining up a shot, the S5 Pro offers this feature for image checking and focusing for a 30 second period; the screen image can be enlarged and moved around. It’s also possible to operate the camera, tethered to Mac or a PC, via the USB 2.0 port with optional Hyper Utility software.

Capture is offered in either RAW, JPEG or RAW plus JPEG, written to either CompactFlash Types I and II ? as well as Microdrive.

An unusual feature is D-Range, which allows variation of the dynamic range of a scene by two f stops. This counters unwanted flare or lack of detail in dark subject areas.

Auto focus can be set up to deal with single shots, the continuous shooting of a moving subject as well as manual. There are three sensing area choices: single area AF, group dynamic AF, dynamic area AF and the latter linked with closest subject priority.

The camera takes a novel approach for a DSLR in its inclusion of five film simulation modes for improved reproduction; these vary from enhanced colour saturation to smoother skin tones, more natural and vibrant rendering of natural subjects (skies, greenery etc) and increased sharpness.

The S5 Pro’s Face Detection Technology detects up to 10 faces in a scene after each image has been captured. You can then zoom in and confirm facial detail, focus and exposure on the LCD monitor.

Based on the D200 Nikon body, the S5 Pro is well balanced in use. Major controls on the body itself are clearly marked. The LCD screen menus are similarly well laid out and easily accessible.

Quick to pull in a run of shots, the camera captured excellent quality and definition.

A fine alternative to the current Canon and Nikon cameras. The S5 Pro’s somewhat different bells and whistlesÂ – like Live View and variable dynamic rangeÂ – should attract the fans.