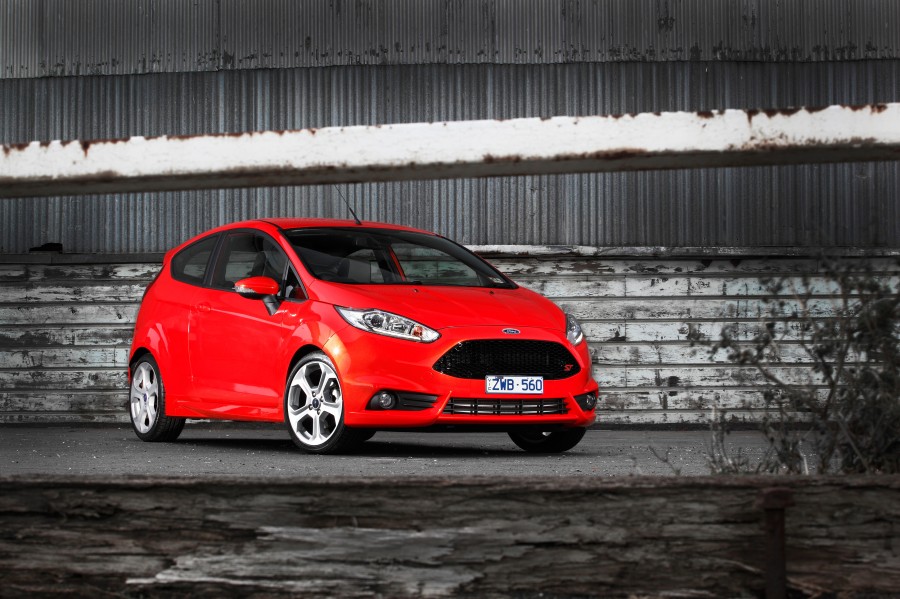 Technology normally comes at a premium. When it comes to cars, this certainly rings true, with many new technologies being introduced in expensive cars first, then trickling down over the years. However, recently it seems that the gap between the first introduction of a technology, and when it becomes available in more modestly priced cars has been narrowing.

Take Ford’s performance-focused Fiesta ST. Note that I used the term ‘focused’ since the new little Fiesta has been designed by the guys behind the super-quick Focus RS hot-hatch, which came from the European arm of Ford Motor Company’s Global Performance Vehicle group.

On the fun side

And after spending a day with the Fiesta ST on a test track, and putting to practice some of the technology that could just save your life one day, this is one impressive little machine. So what makes it tick?

On the outside, the Fiesta ST has gained a more aggressive stance which is both appealing and hints at its sporty character, including 17inch alloys, rear-wing, twin chromed tailpipes and a new blacked-out honeycomb grille.

Beneath the hood, there’s Ford’s 1.6-litre EcoBoost petrol engine that pouches out 134kW and 240Nm of torque, with a handy 20-second over-boost function that propels engine output to 147kW and 290Nm. Equipped with high-pressure direct fuel-injection and twin-independent variable cam timing, the Fiesta ST is 34 percent more powerful than the outgoing Fiesta XR4 model, and can hit the 100km/h at just 6.9 seconds.

EcoBoost still keeps an eye on frugality, however, and delivers a fuel economy rating of 6.2-litres/100, according to Ford, and 145g/km CO2 emissions.

The Ford Team RS has also applied its skills to the powertrain, steering and brakes, and has introduced enhanced Torque Vectoring Control (eTVC), as well as 3-mode Dynamic Stability Control (DSC).

The eTVC helps the Fiesta ST corner, and reduces understeer by figuring out the car’s intended trajectory and applies braking forces to the inside wheels. This effect helps set the car through the corner up by shifting forces, so you can go around faster.

Dynamic Stability Control uses the same sort of methodology, only it’s for emergencies, such as when you need to avoid an unexpected object in your path.

It will reduce power, brake a wheel to counteract spin, and help keep your tyres from slipping. With DSC enabled, however, this can take the fun out of more spirited driving, including track days, so the Fiesta ST comes with 3 driving modes – one with the system on ‘full’, one where DSC will kick in after a slight delay, and one where it’s off completely.

So you can basically have your cake and eat it too. I tried out all three modes, and did my best to upset my little Fiesta by swerving sharply on a slippery surface while applying the brakes. All I can say is that this system definitely works, as it was quite hard to get the car to spin, even in the ‘delayed’ DSC mode.

Check the video below to see a spin with the system completely disabled – don’t try this at home! (We filmed this with the new iPhone 5S’s slow-mo setting.)

In addition to a few other tasty sport additions, such as Recaro seats, a 6-speed manual transmission and rear disc brakes, there’s even a Sound ‘Symposer’, which directs the engine note to the cabin, so you can really connect to your driving experience.

On the safe side

However, there’s plenty more tech in this little car, and one I especially like is the Emergency Assist feature. So in the very unfortunate event of an accident, which is defined by a blown airbag or the emergency fuel cut-off, Emergency Assist will patch into your smartphone via Bluetooth and call 000.

The system will announce that an accident has occurred and provide GPS co-ordinates to the operator. It will then open a line to the car’s occupants for further voice communication.

There’s a ten second window before it calls 000 so you can cancel this process if you wish, and Emergency Assist will override other voice calls if you were on the phone when the accident happened.

This is a no-cost, no-subscription service and leverages the Ford’s SYNC voice-activation and hands-free-in-car communications technology that comes as standard. So basically, in addition to being able to make and receive calls and play music from your smartphone, the car can call for help too.

Speaking of Keys, the MyKey feature is a fantastic option for setting up some ‘limitations’ for the car, which can be encoded into a driver’s key. So if you want to enforce a maximum top speed, a speed warning, or even restrict the radio from playing unless the seat belts are on, you can do this with MyKey.

It’s also a great way to lock the Dynamic Stability Control to its safest setting, or even limit the stereo’s maximum volume. What a great feature for parents who want their kids to keep driving distractions to a minimum while maximising safety.

The Fiesta ST impresses, not just for its on-road performance and handling, it really demonstrates how technology is enhancing the driver’s experience, both in terms of fun as well as safety. It wasn’t long ago that I first heard about many of these technologies being available in luxury and expensive high-performance models. Now the rest of us can enjoy them too.