Future TV – what’s next after LCD and plasma? 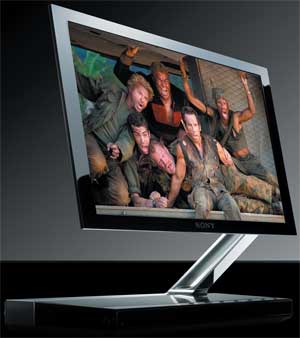 TVs are getting better every year, and new technologies will improve them even more

You may think that we have already seen the last word in display technology, but these things never quite settle down. The next few years should see further enhancements of existing display technologies, and the introduction of some completely new kinds of displays.

Plasma and LCD TVs will continue to improve. There will be more pixels. We expect true high definition (1920 x 1080 pixels) panel TVs to become increasing the norm. Blacks will get blacker. The next generation of plasma TVs should do blacks so well that they will emit no light at all from the black parts of the picture.

One exciting prospect is the super-thin panel TV. Presently, large plasma and LCD TVs are between 90 and 120 mm thick. But recently a conceptual 127 cm (50 inches) plasma display was demonstrated which was only 9 mm thick! This was not a TV because speakers and TV tuner couldn’t fit in, but it does open up exciting new decorating possibilities. Several major brands are expected to launch 25 mm thick models within the next year.

Also potentially improving one’s decor will be the frame-less panel TV, also recently demonstrated. There would be no 50 mm border around the edge of the picture. Instead, the whole of the panel, right to its edges, would be filled with your video image, which would just seem to float against the wall behind it.

But what about the TV I’ve just bought?

It’s best not to think of your new TV – whatever the technology – as an investment. Since prices are dropping, you will never recoup even a significant part of what you paid for it. So write off its cost in your mind, even as you’re loading it into your car to take home.

If you bought one of the first plasma or LCD televisions a few years ago, chances are it is not capable of displaying high definition pictures, let alone Full HD pictures. When it comes to upgrade, though, your ‘vintage’ TV need not be wasted – old technology is not bad technology. Instead, you can ‘retire’ it to a secondary viewing area, such as the kid’s rumpus room or master bedroom.

Now that we’ve dealt with what we have now, let’s take a look a what’s coming, in the next chapter, ‘Next in TV tech’.