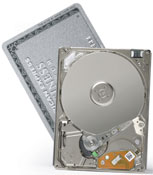 The hard drive at the heart of your MP3 player or personal video recorder bears little resemblance to its ancestor. Indeed, had you seen IBM?s first RAMAC (Random Access Method of Accounting and Control) when it debuted in 1956 it would have been inconceivable that the one ton unit, which was the size of a wardrobe, would eventually become the 1.8 inch wonder that today stores up to 7500 songs in a device that fits in a pocket.

For the original hard drive was pretty skinny on storage. Although as tall as a person, RAMAC had only a five megabyte capacity, which in today?s terms is enough for about two MP3 songs. It used 50 spinning discs, each the size of a pizza plate, to store this amount of data and ran so hot that it needed its own air conditioner.

What it set in motion, however, was a revolution. Previous to RAMAC, locating and accessing data required the tedious winding and rewinding of tape. With RAMAC came random and direct access, and the real beginning of the information age.

While computing has been the obvious beneficiary of the hard drive, subsequent generations of hard disk fuelled the development of a whole new range of devices that, packed with storage, have changed the way people live. Portable music players, video recorders, phones, PDAs, notebooks and video cameras? the hard drive is not just a component of, but actually spawned many of today?s indispensable entertainment and communication toys.

The sophistication of these products makes it difficult to imagine that the hard drive was once the clunky and primitive RAMAC. That it was is a mark of great promise, however; a promise of how far technology might take us in the next 50 years.

In the immediate future, hard drives will continue to get smaller and cheaper while providing ever greater levels of storage. Businesses will soon be buying storage in petabytes  (millions of gigabytes) while terabyte drives (a mere thousand gigabytes) will suffice for ordinary households. When you consider that the highest capacity iPod currently sports 60GB, then it?s not impossible that its progeny will be as big as a watch face but with the capacity to store every book, photo, video and song you?ve ever read, taken, recorded or bought.