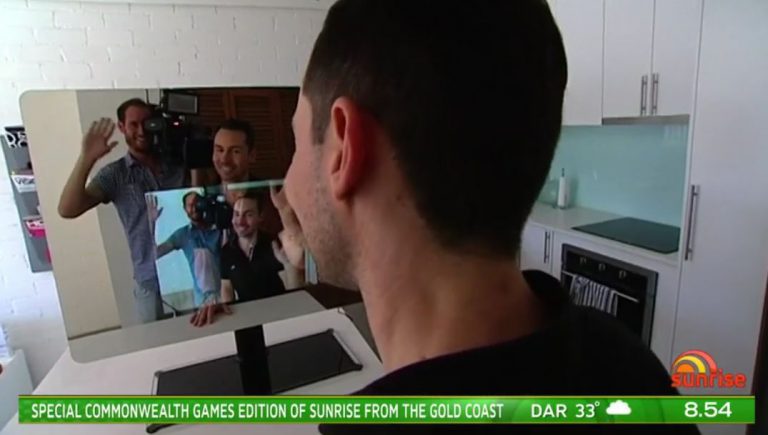 GadgetGuy featured on Channel 7 Sunrise with a range of smart living devices including a TV that becomes a piece of art, Embrace a smart Android mirror, smart glass that changes opacity, and rock speakers.

Samsung QLED TV is a piece of art – literally

First was Samsung’s 4K new 2018 QLED Smart TV that can display artwork in 4K or blend into your wall.

“If you want your TV to blend in you can take a smartphone picture of the TV and its background, and it will blend in,” Val said.

Qi wireless charging is so today

GadgetGuy is excited that his iPhone X now has Qi wireless charging (Samsung Galaxy S has had it for years, Val!).

“The Qi Charge table from King Living is a hit. It is a yuppie thing, but everyone must have a charge table. You can choose from Congo Black, American Walnut and Smoke Oak on a swivelling table,” Val said.

We all want privacy, but sometimes blinds are not quite right. GadgetGuy discovered an Aussie company called SwitchGlass that can dim or opaque your glass via an app.

“This is an innovative product. It is easy to retrofit smartglass to picture windows or partitions. Love it,” said Val wondering how best to use it in our boardroom.

Rock until you drop

“We all love a barbie (Q that is), and Aussies have a climate conducive to outdoor living. The problem is that we often use portable Bluetooth speakers that don’t have the oomph to fill the wide-open spaces. Until I discovered rock speakers – no I mean rock as in stone – not as in music,” said Val.

There are a few makers including Klipsch that has the motto “Pissing off the neighbours” – apt for a music-filled BBQ. Or search for ‘Rock Speakers’.

Perhaps the most innovative thing GadgetGuy has seen recently is the new Embrace Smart Mirror. We looked at the prototype, and Embrace has confirmed that it is in talks with Google to obtain Android 8.1 certification for its public release model.

“It is not until you start to ‘play’ with it and realise the potential of an Android-powered smart mirror. This has great potential not only in the bathroom but as a Google Home hub,” Val said.

The Sunrise segment is here.