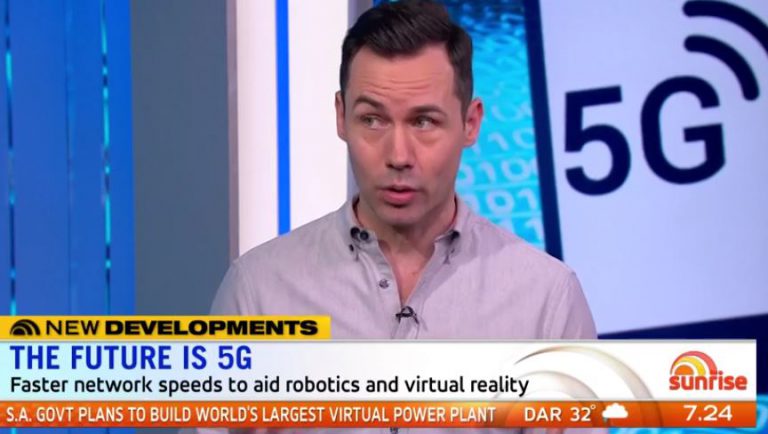 “It is incredible, the network is more stable, and you can connect more devices at the same time – it’s a big jump, and it shows the NBN needs to speed up and hurry up,” according to Val Quinn, Channel 7 Sunrise GadgetGuy presenter.

While real-world speeds may not be as high as claimed the design of the network means it will be considerably faster as more and more devices connect to wireless broadband.

It will change our world with millions of new applications that need the speed – remote control a surgery robot, or anything that requires very low latency. Val spoke of beautiful 3D, autonomous cars – anything that needs real-time and lots of data.

GadgetGuy’s take: Bigger, faster, do more with it, and we will see it as early as next year.

The Sunrise segment marked the opening of Telstra’s $60 million 5G innovation centre at its Southport Exchange on Queensland’s Gold Coast.

This is part of the $5 billion investment over three years to 30 June 2019, to upgrade and expand Telstra’s mobile network, acquire spectrum and lay the foundations for 5G.

Chief Operations Officer, Robyn Denholm, said Telstra had established the Gold Coast 5G Innovation Centre to ensure Australia is among the first countries in the world to gain access to 5G.

“Telstra has already conducted Australia’s first 5G field trial and the world’s first 5G outdoor data call over 26GHz ‘mmWave’ radiofrequency spectrum. From our new 5G Innovation Centre we will be completing some 5G firsts in 2018 to ensure Australia remains at the forefront of mobile technology,” Denholm said.

“5G has the potential to transform the way we all live and work. Like previous generations of mobile technology, it will deliver more capacity and faster data speeds, but on top of that it will support vastly more connected devices at very high levels of reliability and lower latency.”

“5G will take us from a world of connecting people to each other and the internet to a world of ultra-fast mobile speeds and the Internet of Things on a mass scale. These enhancements will unleash a host of new opportunities – everything from smart cities and smart homes, to drones and driverless cars, to augmented reality in both entertainment and at work.

The demonstrations and use cases on show on the Gold Coast include:

You can view the Sunrise segment here.