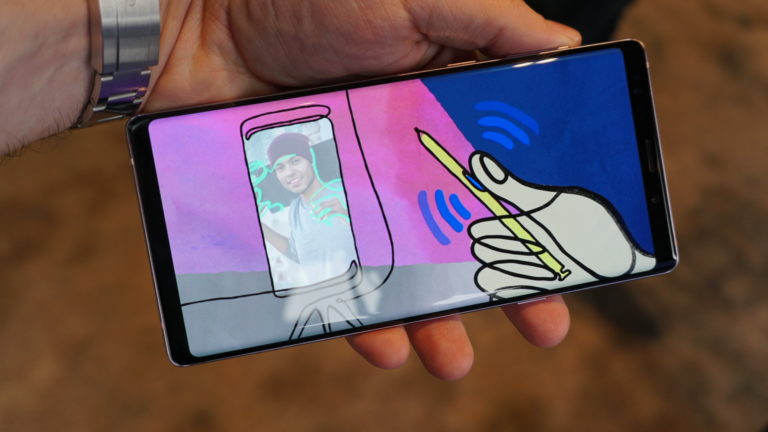 At precisely 1.30 am this morning, the time of the Samsung Galaxy Note9 launch in New York, bleary-eyed Samsung and Telco elves and website minions were readying their offers.

Yes, it is a great phone. Certainly the most advanced Android flagship.

First, you need to determine if you want, versus need the Galaxy Note9 (Samsung Australia website here).

No, it is not blasphemy to ask, but as a Note8/7 (briefly) user, I know its true value. The S Pen drives Note sales. I use it daily for jottings, notes from press conferences etc. I don’t use it for the thousand and one uses Samsung suggests like doodling, annotating etc.

But this S Pen is a little different. It has Bluetooth BLE, and that means the little end button can be programmed to do so much more. For example, press the button to control your camera (shutter button), presentations (forward/back), and apps (enter key), all without touching your phone.

Drawing, taking notes, and sending Live Messages with the S Pen is as intuitive and natural as pen and paper. Its fine .7mm tip and 4069 pressure levels make it a creative tool, not just a stylus.

The S Pen will also be useful if you use DeX as a mouse equivalent. This is starting to look compelling.

But if you don’t need the S Pen, then the Galaxy S9 or similar sized S9 Plus is the answer – at a few dollars less. The camera smarts from the Note9 will find their way to the S9 Plus – it uses the same hardware.

GadgetGuy’s take. The Galaxy Note9 is the most advanced Android flagship of 2018, and I will use it!

We must offer a mandatory warning. Only buy a Galaxy Note9 from approved retailers and these Telcos. This is a special certified version for Australia

So don’t be tempted to by overseas or by a deal from online or dodgy retailers. GadgetGuy will publish specific Australian model numbers and firmware soon.

All three are offering a 128GB to 5612GB upgrade for pre-orders before 23 August. You would be crazy to miss this. All offer Ocean Blue or Midnight Black.

Check if the model is for a single or dual sim (the second slot is micro-SD). Dual sim means you can have two different numbers and LTE data plans on the same device. Set up both your work and personal accounts or add a second SIM when you’re travelling to stay connected at home and abroad.

And check each website for the fine print and conditions, especially for the leasing options.

Telstra offers buy (24 months payments) or slightly lower cost lease for the same period. It has Ocean Blue and Midnight Black. As a separate incentive pre-orders will also receive a Galaxy Tab A, RRP $456.

Lease plans are $10 per month cheaper (return the handset in good order after the lease period).

Telstra throttles data to 1.5Mbps after the monthly allowance is up. All plans include unlimited national talk and text.

Optus also has buy or lease plans over 24 months.