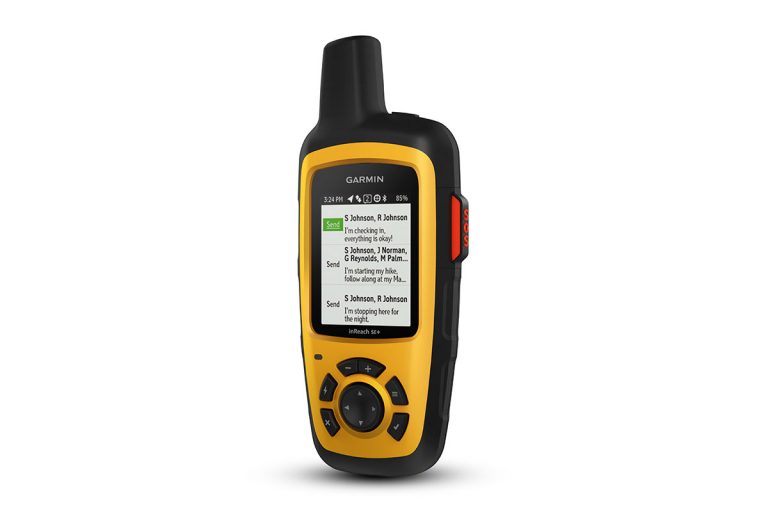 We are so used to being in touch wherever we are, thanks to those amazing communications devices we all carry in our pockets these days. The amazing things can show you in a second where you are within metres, on a map, by coordinates, or even on a (historical) satellite image of your surroundings. You can call nearly anyone, nearly anywhere in the world. If you sense danger, you can reach out to the authorities. If your family is worries about you, they can give you a ring.

Which makes it all the more shocking that if you wander a little too far off the beaten path, out of reach of the nearest cell tower, you could become completely incommunicado.

But the solution to that is in the sky, and the new Garmin inReach SE and inReach Explorer+ devices make use of that solution.

The solution is the Iridium satellite constellation, a network of 66 satellites which orbit the earth at a height of nearly 800 kilometres. Operational since the late 1990s, the constellation was purpose built to allow essentially standard telephone communications from anywhere to anywhere on the face of the earth which has clear access to the sky.

Garmin’s inReach devices are not phones, as such, but they are communications devices in addition to GPS trackers. You can use the Iridium satellite constellation to send and receive text messages to and from any phone in the world, to and from any email address, and to and from other Garmin inReach users.

In addition, there’s an SOS mode to communicate to GEOS SAR, a membership-based global search and rescue coordination organisation. Headquartered in Houston Texas, it is staffed at all times of day and night and has coordinated rescues of its members in over 140 countries around the world.

(Bit of a digression, but if you’re going to really strange places, you’d be mad not to join. A $US29.95 per year individual membership gives access to that response on the other end of your SOS … plus up to $US100,000 worth of search and rescue effort.)

Of course, the inReach devices know where you are thanks to the incorporation of a “high sensitivity” GPS. Using this, the inReach units can also provide tracking data so that users can retrace their steps should they become lost. They can send this trip data to the “MapShare” portal which can be accessed via the Web by friends, so they can track their progress and always have an idea where the traveller is.

Your phone might not provide communications access out where the inReach units work, but it can sync with them using the Earthmate app, allowing access to “unlimited maps and aerial imagery”. As an option, weather updates are available. Data on the inReach devices can be synced to the cloud, presumably when you’re back in communication with the regular phone network.

The inReach SE and the inReach Explorer+ are designed to be impact resistant and are water resistance with an IPX7 rating (up to one metre immersion for up to half an hour). Their rechargeable batteries are rated for a hundred hours of normal use, and thirty days in power saving mode.

The main difference between the inReach SE and the inReach Explorer+ is that the latter goes beyond the basic GPS in the SE, providing full guidance on preloaded topographic maps and the ability to view routes directly on the device’s own screen. It also included a digital compass, barometric altimeter and an accelerometer. Both have colour display screens.

You do need to have am Iridium satellite constellation subscription. Garmin says depending on plan features, that will cost you between $20 and $150 per month.

The Garmin inReach SE is available now for $599, while the inReach Explorer+ costs $699.