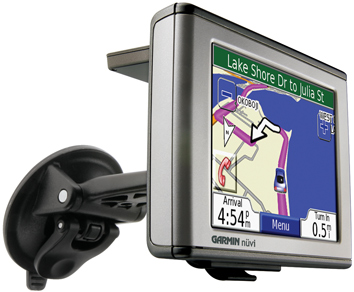 Garmin pitches the Nuvi 310 as “The ultimate Travel Companion”. This means it’s intended to be something more than a GPS; a device that’ll also do simple photo frame and MP3 duty, as well as acting as a language translator, currency converter and Bluetooth phone adaptor. Somewhere in there they’ve managed to cram a very good – but not great – GPS system as well.

The Nuvi 310 relies solely on its touchscreen for all inputs; the only button you’ll find is the power on/off. Once it’s powered up, and the obligatory disclaimer screen is displayed, you’ll be left with a simple set of icons at the bottom of the screen. These present your compass orientation, a simple trip meter (which expands when clicked upon) and the Menu button, which allows you to select routes, search for destinations and use the Nuvi’s other, non-GPS specific features.

In the “fun” category, where other GPS systems simply show you an arrow to indicate your position, the Nuvi substitutes this for a tiny car – and you can download additional vehicles from Garmin’s website if that tickles your fancy. It also supports Bluetooth synchronisation with compatible mobile phones, so you can use it as a substitute keypad while driving, or handsfree if your phone supports that.

The Nuvi 310 uses the SiRF Star III GPS chipset (which is quite common in most new GPS units) for receiving GPS signals, which it then correlates against Australian map data to let you know where you are, or where you’re going. Aside from GPS functionality, it’ll also support MP3 and audiobook playback and photo display on its touchscreen.

On average the Nuvi 310 took less than 30 seconds to triangulate our position once we’d flipped out the tiny antennae. The car mounting kit attached easily and surprisingly solidly to our test windscreen, although this did have the minor negative effect of making it harder to remove when we wanted to safely stow it in the glove box. Navigation was swift and accurate, although the Nuvi uses a rather garish colour scheme to indicate the road you’re meant to be taking, and it took us some time to adjust to that and ensure we were following the correct path. The two Australian navigation voices (“Karen” and “Lee”) were clear enough and gave us enough warning to make most turns in time.

Using the Nuvi 310 as a walking GPS worked quite well for navigating through the streets of Sydney, although we did notice that for some reason the model of the car kept slipping through 90 degrees and showing us walking sideways up the street.

The additional functions of the Nuvi 310, such as MP3 playback, worked acceptably well, but only at a very basic level – we wouldn’t throw out the iPod just yet. The language translator included is only a sample of a commercially available add-on.

The Nuvi 310 does command a premium price over other simple GPS units, but if you’re after a GPS that also good for use outside of the car, it’s a good bet.