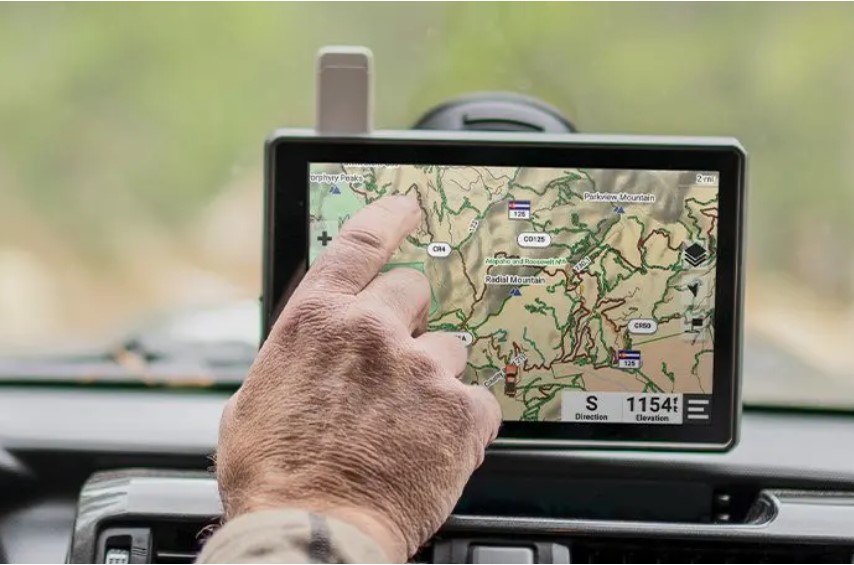 Forty years ago, my father brought the first GPS receiver into Australia. A GPS receiver then provided a position in the form of numbers only. The ‘future’ from 40 years ago was the ability to use it as an in-car navigator. Today, with the advent of built-in car navigation and Google and Apple maps on your smartphone, is there any room for the standalone GPS navigator? Garmin Australiasia, a leader in GPS across fitness, automotive, marine and aviation, thinks so. Its Garmin Tread is set to show how the humble GPS navigator has moved to the next level.

What is a Garmin Tread Overland?

The Garmin Tread is a rugged all-terrain GPS navigation device that allows navigation and communication in remote areas without mobile phone coverage. It also optionally supports reversing cameras and remote control of 12-volt devices such as lights. While it has its own battery, it would normally be powered from a vehicle’s 12v or 24v supply. And it goes without saying that the Tread is just as happy navigating city streets as it is outback passes and paddocks. Ultimately, it really comes into its own for those who plan to tour Australia.

How it stacks up

At $1,999, the Tread seems a little expensive. Still, when you look at its individual functions and tally up what it would cost to buy each separately, you’ll start to see the value. We’ll break it down below.

The Garmin Tread comes in 8-inch and 10-inch versions. An 8-inch Garmin standard navigator retails for $600. The more specialised Tread, however, includes a built-in inReach communicator (see below for details), which retails for $599 as a separate unit. To access the Tread’s Hema Maps, you would need to purchase a separate navigation device for $799 or buy a $100 app for your small-screen smartphone.

The Tread also supports pairing a wireless reversing camera for the rear of your vehicle or caravan ($300 for the Garmin BC50). This will display the camera’s view on the Tread’s large screen. Alternatively, you could buy a wireless camera solution for $400 with a camera and screen.

Tallying it all up, the Garmin Tread and a single reverse camera cost roughly $2,300 versus buying four separate units for the functions mentioned above at around $2,400. If you went for this option, your dashboard would be pretty crowded too, with four individual screens versus one good-sized one. And with some additional functionality that we’ll cover below, the Tread’s $1,999 starting price may not seem so expensive after all.

Also keep in mind that Tread is ruggedised, with a IP67 weatherproof rating, so the unit could be dropped into a puddle or engulfed in dust and keep working without issue. Other separate units may not be as robust.

What is Garmin inReach?

The Tread uses satellites to determine its position via the Global Positioning System (GPS); however, this technology is purely one-direction communication – satellite to the receiver.

Garmin inReach is a two-way communication solution that uses the Iridium satellite network. Iridium uses 66 satellites at an orbit of 781 kilometres to provide global coverage.

On purchase, your Tread is Iridium-capable, but you must subscribe for it to work. Various plans from $20 to $99 a month allow 2-way SOS text communication, 2-way text messaging, location sharing and weather updates.

If you have no phone coverage, this is one of the most economical ways to stay in touch, especially in an emergency. The Tread has an SOS button with a safety cover to send your position in an emergency and start a text conversation with the 24/7 Garmin International Emergency Response Coordination Centre.

If you plan to travel to remote areas, you are unlikely to have mobile phone and data coverage. Google and Apple Maps rely on an internet connection to work unless you have downloaded a route or map previously. These are also city-focused rather than for the outback.

The Tread, with its pre-downloaded maps for the whole of Australia and New Zealand, comes into its own. This is further enhanced by Garmin’s decision to preload Hema maps into the device. These maps provide 1:72,000 scale maps showing more than 105,00km of tracks and trails. You will also get 4WD destinations and hydrographic features such as lakes/rivers, shorelines and perennial and seasonal streams. From a searchability perspective, the Hema 40,000 point-of-interest database is available to help you find campsites, lookouts, toilets etc.

Beyond the previously discussed Hema Points of Interest (POI), there are preloaded POIs from Tripadvisor, iOverlander and Garmin. This will give you the best chance to find scenic views, camp sights and facilities on your travels.

With the Garmin optional cameras, you can add up to four units to give you various views from your Tread. You could have one facing forward to see below the eye line of your bonnet, one at the rear of your vehicle and one at the back of a caravan or trailer. Two models are available (BC50 $299 & BC50 Night Vision $459), which are identical other than night vision up to 6m from the camera. The 160-degree field of view cameras are wireless and only require power, saving on running communication cables. The 720p high definition cameras have a wireless range of 15m but can be extended to 30m.

Other things the Tread can do

Suppose you want to wirelessly control various 12volt devices like lights, compressors, switches, etc. In that case, you can add the optional Garmin PowerSwitch digital switch box and have control from your Tread screen or smartphone. This removes the need to have various switches cluttering up your dashboard.

Next, if you’re headed to 4wd tracks, some built-in sensors come in handy — including an altimeter, barometer, compass and pitch/roll gauges.

Got a dog? You can see the dog’s location when paired with a Garmin GPS dog tracker too!

Lastly, there’s location sharing if you’re travelling in a pack. Called Group Ride, this can be facilitated via cellular coverage on your smartphone and the Tread app or via an optional Garmin VHF radio. Note this is not a longer range UHF solution and is expensive for a VHF radio at $529. If two or more join a group, features such as location sharing, pre-defined messaging, and route tracking are available.

For testing the mapping capabilities, we compared the Tread to Google maps navigation.
Remember that this device is designed for offroad navigation, although it’s intended to be just as capable in the city. Case in point, navigating with Google, it said turn left in 300m, and Garmin told us to turn left after the Mitsubishi dealer. This landmark navigation in the city was much easier than judging distances. However, we encountered a situation where we should turn right at Tuffy Muffler, which had moved locations 5 years ago and not so helpful.

When setting up your Tread, you can enter your vehicle size and weight as well as the size of a caravan or trailer you might be towing. This, combined with a route option, will determine what roads the Tread will suggest you travel on. The Tread will not offer roads your caravan cannot navigate, and the route option allows you to choose between the fastest sealed route through to offroad trails.

We liked the ability to mix and match the information on the screen. For example, you can have the navigation page up but also a weather radar showing storm activity in the area or pitch and roll sensors.

The Tread comes with a heavy-duty suction cup mounting bracket, which I have never seen better. It can be powered by either a 12v cigarette socket or USB-C connector.

The detail of the maps was a sticking point between myself and my partner. I like lots of information on maps, and she likes the bare minimum. The good news is that the clutter (or map detail) can easily switch on or off. This includes satellite maps, which must be downloaded separately (at no cost). If you run out of space on the Tread, it supports up to a 256GB microSD card.

When driving, your smartphone with the Tread App loaded becomes the gateway for your Tread Overland edition to access information such as weather, traffic and the group ride function. In addition, the App can be used for route planning and to sync waypoints, tracks, routes and collections. You may also import and share GPX files, a GPS exchange format file.

Creating a route is fairly simple: searching for your next destination and adding it to the route, and then choosing between the fastest time, ‘adventure’ or straight line, which influences the roads chosen.

The optional reverse camera integrates easily with the Tread. It brings up a clear colour display of the selected view once connected. The image comes up quickly and can be viewed as a full screen or smaller image on the map display. Adjustable reversing lines can be shown to help.

We tested the wireless camera’s signal range (BC50) and it appears to exceed the specifications. Still, the Wi-Fi signal will be affected by what is between the camera sender unit and the Tread. The camera Wi-Fi sender unit can be positioned closer to the camera with an optional extension cable if you need more range. One big miss was that there are no operational instructions for the camera in the Tread manual, and I learned how to use it by trial and error.

The Garmin Tread is not the solution for big city navigation. If your goal is to tour Australia, the Tread replaces around four separate devices and combines them into one. The remote maps and advanced navigation features make it a handy companion to ensure you reach your destination without missing any highlights. Find yourself in dire straights or just want to keep in touch with family or friends. The InReach satellite communication will keep you in touch where there is no phone coverage, and there are plenty of options for managing power, tracking friends or even your dog.