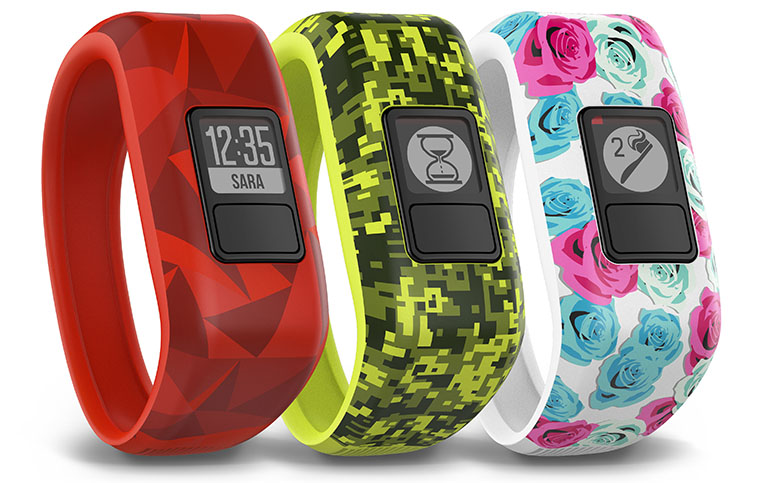 Enough of the oldies trying to get or stay fit. What about the alleged obesity epidemic amongst Australian children? Maybe they need a fitness gadget to keep them moving?

Garmin’s here to help with a fitness tracker especially designed for kids: the Garmin vivofit jr. It does the stuff you expect of a tracker, plus a bit more. It tracks steps, sleep and other activity. Importantly, it has a one year battery life so there’s no worries about the youngster failing to plug it in for a nightly recharge.

It’s for kids, so the band stretches over the hand, eliminating the need for catches and latches that might be difficult for children to operate.

Says Adam Howarth, General Manager of Garmin Australasia, “We’re excited to announce our first wearable just for kids – the vívofit jr. … designed with kids and parents in mind, from its durable and comfortable band to its engaging app that motivates kids to get moving, while keeping parents involved.”

In addition to the tracking, the vivofit jr. displays time and date, can be personalised with the child’s name and can prompt the child to keep on moving. There are motivational rewards too, when goals are met. At $129 each they are relatively affordable even if you have quite the brood. The parent-controlled mobile app allows you to manage all of them, and includes the slightly Orwellian seeming function of “chore/behaviour management for parents”.

The launch is going to be accompanied by a marketing campaign featuring Commando Steve – famous from the Australian version of The Biggest Loser – and his eight year old daughter Ella Willis.

“Selecting Commando Steve’s daughter, Ella, to be the face of vívofit jr. in our television and print commercials was a natural choice. Ella appears alongside Steve, who has represented our brand for more than two years. Together they are the perfect fit for our exciting new kids activity tracker,” said Howarth.

The Garmin vivofit jr. will be available in a range of colourful, patterned bands, including camo green and floral pink, from October at Rebel and Amart Sports stores.