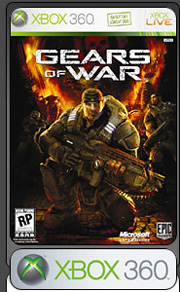 There’s been a lot of hype about Gears of War, and it’s well deserved. With glorious graphics and an art direction that lends a really gritty sense of reality to proceedings, the game is rough-edged and very, very brutal. If anyone in your house still thinks of fat, platform-jumping cartoon characters and cute, wiggly 2D aliens when they hear the word ‘videogame’, then don’t let them near this, they’ll probably puke. Gears of War is a violent game. It’s so violent, and that violence so graphically depicted in shockingly gruesome detail, in fact, that I had to look away and take a deep breath after witnessing the first ‘Lancer’-inflicted chainsaw killing.

Essentially a third-person shooter game with some surprising additions, Gears of War has already sold over 3 million copies worldwide. That’s a phenomenal success and it’s down to a winning combination of fast-paced action, great weapons, distinct, exciting teams of warrior characters and, more importantly than all that, the sheer visceral enjoyment you get from playing it. Some games take themselves very seriously these days – I have a helicopter simulator that uses all 102 keys on the keyboard not once, but TWICE, to cover all the commands necessary to keep the damn heli in the air. Now, I’ve flown an actual helicopter and it’s not that complicated in real life!

What Gears of War does better than almost anything else out there right now is that it understands – or rather the guys at Epic, the game’s developer understands – that games are meant to be fun. So, rather than expect the gamer to have the dexterity of a concert pianist and the brain power of a gaggle of rocket scientists to remember and use all the button combinations to make the game work, Gears of War uses a single button. ‘Context sensitive’ commands mean that when you push a button, the game is smart enough to work out the best action at any given time, and makes your character do that action. So if you’re running towards a low wall and press the button, your character dives to cover behind the wall. If you’re already behind the wall, the button press vaults you over it to continue your attack. Smart.

Actual gameplay is fast, furious and terrific fun, but pretty shallow. Fortunately, there are a few things that add depth to the experience and one of them is blindingly simple; reloading. With the onscreen action as fast as it is, you need to reload often, and most games do it automatically as you run over some ammo, but Gears of War makes it into a challenge. Press the reload button and the process can be automatic and fuss-free, but time the button press exactly right and you get a super-fast reload, putting you back in the fight that much quicker and giving you a real sense of satisfaction. Similarly, there’s the team work element. You can run madly towards every enemy you see or you can work smarter, co-ordinating attacks with the other members of your team to bring enemies down quicker, more spectacularly and with less risk.

Gears of War is simple in the execution – and boy, there’s a lot of execution! – but the superb teamwork element in both the single and multiplayer sections lift the game way above the usual run-and-gun, deathmatching formula of competing titles. Go and buy it!