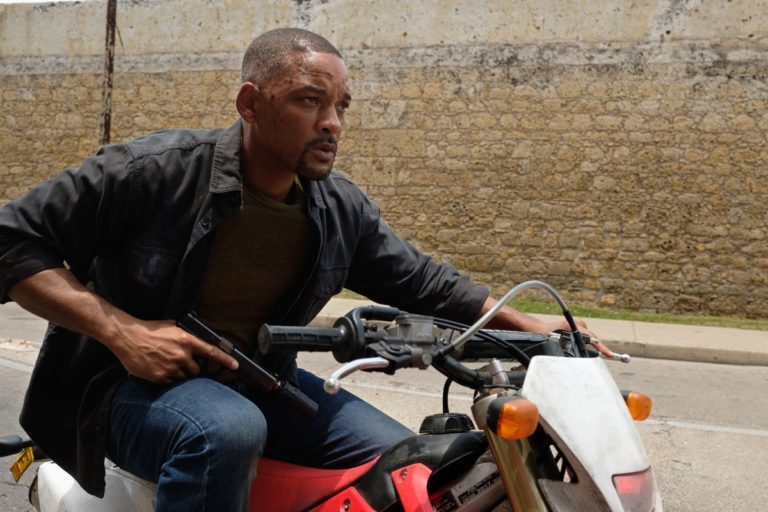 The Will Smith action thriller Gemini Man has largely received reviews amounting to meh. But I’m telling you, you really must buy this. But not for the reasons you may think.

Okay, we have the ridiculous, but ubiquitous trope of our hero being subjected to a godawful beating, being briefly tended by a beautiful woman and then, within a day, engaging in more battle with no loss of facility or extension. Look, the story is right out of the 1990s scifi/action genre, of the kind that Arnold Schwarzenegger did seemingly by the dozen. Think The 6th Day.

Actually, that movie currently scores 5.9/10 on IMDB. Gemini Man manages only 5.7/10. I gave it 7/10 because I don’t mind a bit mindless stuff, if it’s well executed. And the lead Will Smith has far more acting range than Schwarzenegger ever did. Still, it’s a throwback plot-wise. But there are a couple of top-notch action scenes.

The why is HFR, or High Frame Rate. One of the things that UltraHD Blu-ray brought in beyond regular Blu-ray capabilities was the ability to encode at 60p. Normal Blu-ray tops out at 24p or 60i.

Not many movies take advantage of that capability because the great majority are still shot at 24 frames per second. HFR requires high frame rate original photography.

There are a few HFR movies around. For example, Peter Jackson’s Hobbit movies were all shot in HFR, but he used 48 frames per second, and this is not supported by UltraHD Blu-ray. (Which I’ve always thought is a rather silly oversight in the UHD BD specification, given the popularity of those movies.)

In 2016 director Ang Lee blew that away with his film Billy Lynn’s Long Halftime Walk. He shot that at 120fps, and it was shown at that rate in selected cinemas. Likewise for Gemini Man. Both, incidentally, were released in 3D as well, but not on disc.

While UltraHD Blu-ray does not support 120fps, converting to 60fps is relatively trivial, so that’s how it appears on the disc.

What does HFR do to the picture?

There are two marked changes produced by HFR when viewed on good 4K equipment. Neither of these is subtle.

The first is that motion is enormously smoother. I have not seen either of these movies in a cinema at 120fps. But I’ve been using Billy Lynn for years as a test disc and now I’ve seen Gemini Man, both at 60fps. And, wow, are they smooth or what? I think that 60fps must be coming close to the limits of the human eye’s ability to detect step motion. Even though we’re usually not conscious of seeing the steps with 24fps stuff, at some level we do perceive it.

Of course, these days many people have experienced a pseudo HFR thanks to the motion smoothing in their TVs. That smoothing does tend to be associated with some distortion, and often with a reduction in random film grain and such. There’s none of that here. These are original frames, conveyed faithfully. Still, it seems some cinema goers find the smoothness disturbing. (I did too, somewhat, when I saw The Hobbit: An Unexpected Journey in the cinema on its original release.) It looks different. That subliminal shudder is gone so the result just doesn’t seem to trigger the unconscious “This is cinema” associations in our minds.

But as I’ve watched sections of Billy Lynn multiple times, and now Gemini Man, my mind has adjusted to the greater flow of information being conveyed by the picture. And I’m coming to love it.

Before putting on Gemini Man, I’d watched 1917 for the first time on UltraHD Blu-ray. The picture was good, but not quite as eye-popping as I’d expected. Rather than my regular LG OLED TV, I was using a new Sony 4K projector which I’d installed just a few hours previously. I was sitting about 2.5 metres away from the 83.5-inch projected image. (I hadn’t looked it up at that point, so I’m shocked to discover just now that the projector is priced at more than $20,000!) Perhaps I hadn’t yet set up the projector optimally, I wondered.

But then with Gemini Man, the second marked change became apparent. Somehow the HFR made everything look sharper. I’ve done a lot of comparing of UltraHD Blu-ray compared to regular Blu-ray, and in general the differences in terms of sharpness and detail have been … modest. A lot of the time, indistinguishable. As far as sharpness goes, the difference between UltraHD Blu-ray and regular Blu-ray is far short of the difference between Blu-ray and DVD (see, for example, here and here and here). But somehow high frame rate translates into a huge boost in sharpness and detail. It’s not just in fast-moving scenes, but even in closeups on almost unmoving faces.

And also to accustom yourself to HFR. We’ll be seeing four Avatar sequels in HFR over the next few years. Best start to get used to it now, and train your brain out of its 24fps habits.