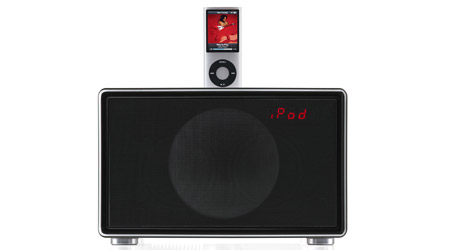 Geneva’s Model S sells itself as much on style as features. Our review sample was a bright carmine red box with an optional circular stand, but it’s also available in white or black. Rather than cheap-looking light plastic, the stand is a full metal column that provides solid support and looks highly enticing.

The Model S is a full service kind of dock, with inbuilt FM radio. It’s also an alarm clock as well as a dock, although with no iPod attached it’s not even obviously a dock at all. That’s because the dock connector rests on the top under a motorised cover. Flick to iPod mode and it rotates into view, which is one of those little party pieces that just plain impresses, no matter how simple it actually is.

The remote control in our review sample had a similar striking red and silver design, and unlike many docks includes the ability to tweak bass and treble settings alongside volume.

Next to the dock is a touchwheel that will emulate the features of a touchwheel iPod. Its utility is a little suspect, as it’s very sensitive, and if you rest your fingers in the wrong spot while adjusting your iPod, you may accidentally bump playback or volume options.

Audio output was good for a unit of this size. The inclusion of bass and treble controls on the remote is nice, but we often found that their tiny incremental steps made little difference to the audio output.

The Geneva Model S is a solid iPod dock in audio terms, but it’s a system you’d buy as much for the sheer visual appeal as you might for the actual audio quality. As a bit of room furniture it’s very appealing, but if you’re more audiophile than aesthete, you may be better served elsewhere.