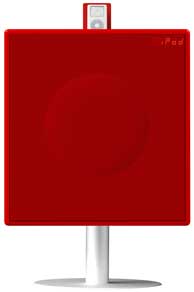 The Geneva Model XL Sound System is a single box FM radio, CD player and iPod/iPhone dock. But that sells it short, for it is as large as a bar fridge, packs 600 watts of amplifiers and full three-way stereo loudspeakers.

So, yes, there are a total of six speaker drivers in this box, from a pair of 25mm soft dome tweeters down to large 203mm bass drivers. It seems that each driver has a 100 watts of power available to it, supplied by six D2AUDIO digital amplifiers. The drivers are bass reflex-loaded in this very sturdily constructed box. The whole thing, standing 613 mm tall and 55 mm wide, weighs a full 38 kg!

Underneath are connections for the power cord, FM aerial and a stereo analog cable. The base of the unit is held up by four screw-on feet, and a floor stand ($399) is optionally available.

The sides, top and back of the unit are finished in a shiny white (or red or black) gloss, while the front is fitted with a colour-matched perforated metal grille. On the top is a fold-up panel that reveals four basic controls, a 3.5mm input socket, and an iPod docking connector. Behind this panel is a slot for inserting CDs.

You get a remote control and the information is provided by a 22mm tall five-digit LED, visible through the perforations in the top right corner of the grille.

The iPod or iPhone charges even when the unit is switched off. The remote control allows you to skip tracks and to pause, but it provides no menu navigation. The FM radio tuner was unusually good, providing clean reception on stations that are usually pretty noisy in my area.

The system went nicely loud. Not as loud as I was expecting, given the size of the unit and the power provided, but it still managed room-filling levels. When really pushed, the sound got a little harsh, confused and dynamically compressed. But that was with sound levels peaking well over 100 decibels.

The volume level is displayed as a scale from 0 to 100. If you switch off the unit with the volume above 50, on the next start-up it reverts to 50: a nice safety measure.

The sound was well balanced tonally to the extremes of the treble, and all the way down to below 50 hertz, with usable output down to about 35 hertz.

A problem with single-box speaker systems is the lack of stereo separation, and to deal with this Geneva has employed ‘Embracing Sound’ technology. This processes the signal (apparently by primarily feeding some phase-adjusted sound to the opposite channels) to produce a wider stereo effect from closely spaced speakers, and ‘Embracing Sound’ claims this produces better actual results than normal stereo speakers.

I was about to completely dismiss this concept because to me the sound stage was confined to the face of the unit. Then I sat myself carefully facing it, right on its centre axis. The sound stage opened up, both to the left and right, and to the front and back. Excellent depth appeared in a most attractive way.

Just don’t expect that behaviour when you’re not in the unit’s very small sweet spot.