Get barbecuing with Sunbeam: it’s in to be out 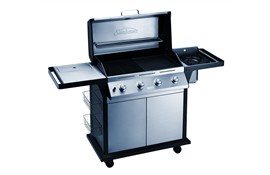 Sunbeam has added two new gas barbecues to its Innovo range ? one, the Innovo Coastal Gas GB6100 ($1,199 RRP) featuring marine grade brushed stainless steel panels which is ideal for people living in coastal areas that are worried about rust.

All Sunbeam?s Innovo gas barbecues feature four high performance burners and a three-tier system that prevents hot and cold spots on the cooking plate for perfect cooking results every time.

In addition to the Coastal BBQ, the Sunbeam Innovo Gas BBQ GB4100 with a side burner (pictured below) and a recommended retail price of $799 could make an affordable gift idea for those setting up their first home. Both models are available in September.

Complementing anyone?s barbie is the Sunbeam Beer Mate ($569 RRP), a universal beer and beverage cooler with a tap system that lets your guests pour their own chilled beer.