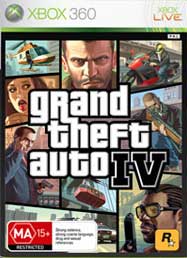 Xbox Australia have announced a limited edition pre-order offer on Grand Theft Auto IV, a game exclusive to the Xbox 360.

Gamers who pre-order Grand Theft Auto IV for Xbox 360 will receive FOUR exclusive Grand Theft Auto IV Gamerpics and 500 Microsoft Points, which can be redeemed by entering a code via Xbox LIVE Marketplace.* This is a limited offer, subject to availability at participating retailers.

The hugely anticipated, new instalment in the ground-breaking Grand Theft Auto series is set to arrive on April 29, and it will be coming to the Xbox 360 on day one.

In addition to online multiplayer – a first for the series – gamers will experience hours of additional gameplay with two downloadable episodes exclusively available on Xbox LIVE starting Spring 2008.

Focused on the story of Eastern European immigrant Niko Bellic, “GTA IV” takes players back to Liberty City and promises a cinematic story told like only Rockstar can, a vast and detailed world to explore, and gameplay like the series has never seen before.