Get some HD TV on your PVR 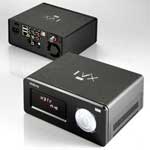 High definition has up to five times more image detail than standard TV, which adds to up to far superior picture quality. HD TV is richer, with more vibrant colours and better-defined edges and lines. Not just about image, many HD TV programs are made with cinema-style surround sound to enhance the home entertainment experience.

TViX PVRs have a built-in high definition TV tuner, allowing you to enjoy HD broadcasts of your favourite shows from Australia’s major networks

All the free-to-air television networks in Australia are broadcasting at least 20 hours of high definition a week, with regular programming including news and current affairs, breakfast TV and games shows, as well as some major sporting events. Many locally made dramas, such as All Saints, Australian Idol and Home and Away, are now shot in high definition, and the majority of popular international programs, including CSI: Miami, Desperate Housewives, House, Prison Break, and The Sopranos just to name a fewÃƒÂ¢€š are created in high definition.

In addition, the 2008 Beijing Olympics in August will be broadcast in high definition, as will all games in the 2008 AFL season. You can visit the Digital Broadcasting Authority website (link opens in new window) for a comprehensive weekly listing of HD broadcasts, as well updates on monthly movies and special events being broadcast in HD by the networks. Nine has announced similar plans.

High definition TV content is increasing too. The Seven and Ten Networks recently trialed a limited ‘breakaway’ primetime schedule of HD programming, and from December 2007 both will have launched new channels dedicated entirely to high definition programming. Seven’s has announced plans to make its HD channel 24 hours, with up to eight hours of HD planned in the initial period, while Ten will transmit up to 50 hours a week. Channel Nine has announced similar plans for a dedicated HD channel.