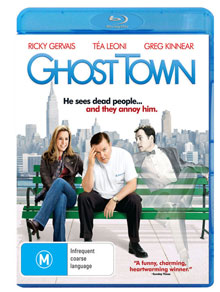 Typecast as he seems to have been in recent films as a neurotic, babbling and officious Englishman, Ricky Gervais doesn’t venture too far from type in Ghost Town but the result is far more successful than on previous outings, such as Stardust and Night at the Museum. Genuinely funny moments, quite often from other, unexpected sources than Gervais’ character Pincus, bring a refreshing turn to the ‘seeing ghosts’ concept and form a welcome relief, even for fans, from the relentless earnestness of the likes of Ghost Whisperer. The only real letdown is that the film plays too closely to the Hollywood expectations, playing too much to the inevitable meet-split-makeup rom-com formula rather than exploiting the mine of comic potential in Pincus’ reluctant dealings with the dead.

The only extra content available to the suckers – sorry, discerning customers – who buy the barren Blu-ray edition is the rather unexciting prospect of listening to Director David Koepp and the comic genius himself natter on in as commentary track. That said, Koepp proves to be as amusing as Gervais, with the first 20 minutes or so more a sit-down comedy routine as the pair speculate about baby ghosts rather than anything happening in the film. Some of it is even oddly informative, including filmmaking tips and the discovery that much of the dialogue was improvised.