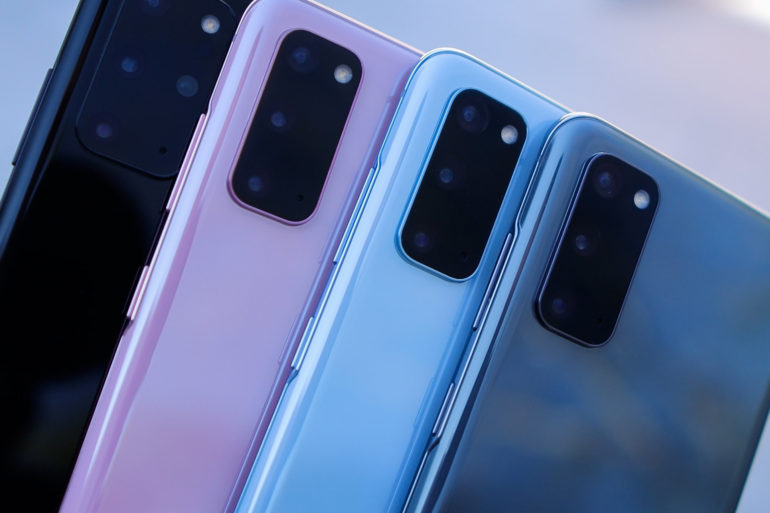 These were the figures the industry needed after an abysmal Q1, Q2 and Q3 detailed here. At that time dire predictions were between a 5-8% decline for the year. It was 10% down but perhaps that was cathartic.

Counterpoint’s figures use ‘sell-in’ that can reflect ‘channel stuffing’. But these are full-year, year on year (YoY) figures, so any ‘stuffing’ averages out. Here is an overview.

#1 Samsung lost 14% but still the largest with 19% single market share. A-series was the strongest performer (85% of smartphone sales are below $699 – see our late 2020 picks here). This segment is hotly contested in Australia, and smaller, perhaps more agile players like OPPO, vivo and realme ate its lunch! Flagship sales dropped to single percentage digits. Samsung’s 5G offerings garnered 8% of the Q4 2020 market.

#2 Apple had a 3% growth to 15%. The iPhone 12 5G came out in Q4, 2020 and quickly took 24% of the lacklustre 5G market. This was because a) there was a pent-up demand by Apple users for a 5G iPhone, b) it offered mmWave in the US and China, c) heavy discounts/trade-ins and strong carrier promotions inflated sales and d) it was only in 5G!

#3 Huawei continued the downwards spiral shedding 21% market share to 14%. More than 70% of its sales were in China for the lower cost Nova 7 5G and where Google Android does not matter. Chip shortages due to the US Entities blacklist have strangled its new phone development and flagship sales.

Huawei also sold Honor (a Huawei sub-brand accounting for 43% of its sales) to a Chinese-based Consortium to reopen the sub-brands supply lines with Google Android and ARM chip fabricators. It is also considering selling the Mate and P sub-brands, leaving very little in its smartphone range.

#4 Xiaomi’s 17% growth to 11% was in European international markets, but some was at the expense of Honor in China. While the brand is in Australia via its mi Store, its lack of retailer channels has held it back. It will soon make a huge push here with a range of new models.

#6 vivo (BBK brand) lost 5% to 8%. We call it a worker’s phone, and it has a reputation for solid value and performance.

#7 realme (BBK brand) grew 65% to 3%. Admittedly the growth was from a lower base, but this is amazing. Its youth-focused social media and online marketing are working – it is trendiest Android brand to own. realme is now looking to place selected models via retail channels to maintain its spectacular growth.

#8 Lenovo (mainly Motorola brand) dropped 18% to 2%. But it’s doing quite nicely to even be in the top 10 – it was not there in 2019. Lenovo is in the envious position to ‘experiment’ with different strategies to see what works. For example, it is trying to move from the ‘pre-paid’ to ‘post-paid’ market – that takes time, but the rewards are Telco support. Its Razr gamble is paying off – not so much in sales but in positioning it as a key innovator. My UI still allows it to claim pure Android, and it’s a hit with users. While it appears slow and steady, it knows that ‘Legends are made moving forward’.

#9 LG lost 13% to 2%. Its lower cost K-series sell well. Its LG Velvet is GadgetGuy’s pick for 2020. For whatever reason, it never quite gets the attention that its other South Korean sibling gets. However, both are benefiting from not being made in China.

#10 Tecno – a new Chinese entrant. Started with the Phantom 6 in 2017 and 50 models later is the major player in Africa and the Middle East. It is cheap and cheerful and moving outside its low-cost base to include mid-range models for new markets. We don’t expect it will be in the top 10 in 2021.

Outside the top 10 are a hundred or more makers. Collectively they dropped 27% to 18%. There is no doubt that the spectacular increase by realme is evidence of a move to ‘brands’ and support.

Sad to see Nokia at .7% where its feature phones are doing extremely well.

There are no local figures yet. Our retail spies confirm that Apple’s 5G move has excited the 5G segment, but 4G still rules.