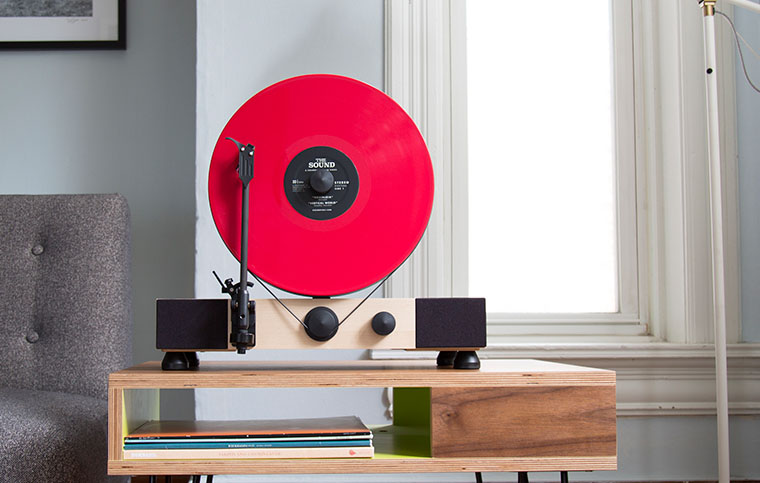 We will be returning to this device once we get our hands on it, but we couldn’t wait to at least mention it: the Gramovox Floating Record Player. I’m not quite sure what the “Floating” means. I’d call it a “Vertical” record player. Conventionally a turntable holds your records horizontally and lets gravity do the work of holding the stylus in the grooves of the record.

(You do know that LPs work by means of a physical groove, wobbling to and fro, pressed into the vinyl, don’t you? This represents the sound, and it moves a stylus which is connected to a little dynamo which makes the electrical signal. I mention this because a young adult of our acquaintance recently told me the idea seemed so counterintuitive in a world of digital technology!)

So what’s wrong with the convention? I was thinking the Gramovox arrangement might be for the saving of space, but the press release doesn’t seem to mention that. Instead it’s part of the vinyl aesthetic. Often people say they prefer vinyl to CDs or other digital media not because of its alleged “better” sound, but because of the whole vinyl experience: the TLC that the records need, the careful placement upon the platter, and the stylus upon the lead in area, the beauty of the artwork which, let’s face it, can’t be translated effectively from a 300mm square LP cover to a 120mm square CD cover.

And it turns out, that’s what Gramovox was going for with the Floating Record Player.

“We treat vinyl as the art form that it is. Watching the vinyl as it spins, which always looks so different from record to record, is all part of the experience. We wanted to create a visceral vinyl experience that showcased the record as both art and a medium to produce fantastic sound. And we’re proud that we spared no resources in ensuring the engineering was perfect, so it plays flawlessly in this vertical format,” says Gramovox Co-Founder and CEO Pavan Bapu. “We want our products to evoke nostalgia, to bloom in the design space, and allow you to rediscover the way you experience your music. The result is a high-performance turntable that plays your records vertically – producing the illusion that it’s floating.”

The Gramovox Floating Record Player is a player, not a turntable, because it has a built in amplifier and speakers. Compact 50mm ones, with 15 watts of power for each. However you can plug it into a bigger amplifier and speaker via its line level outputs. It is certainly a visually distinctive package.

In several ways it’s also quite conventional itself. It uses a belt drive with the speed changed between 33 1/3 rpm and 45 rpm by moving the silicon belt on the cog. What looks like a very normal carbon fibre tone arm (it even has a counterweight!) holds the cartridge, which itself is the very popular Audio Technica AT95E with elliptical stylus.

Which had me wondering: without any gravity to help, how does the stylus remain in place? One of the photos reveals the answer: a small spring behind the pivot forces the arm towards the vinyl, applying the required two grams of force. I expect that the little cylinder over the spindle at the centre of the LP in the pictures is some kind of clamp.

Here’s the surprise: I’d written all the above quite expecting the price to be well north of a thousand dollars. But it turns out that it’s $669. Available only from thesoundofvinyl.com.au, with your choice of maple or walnut veneer.