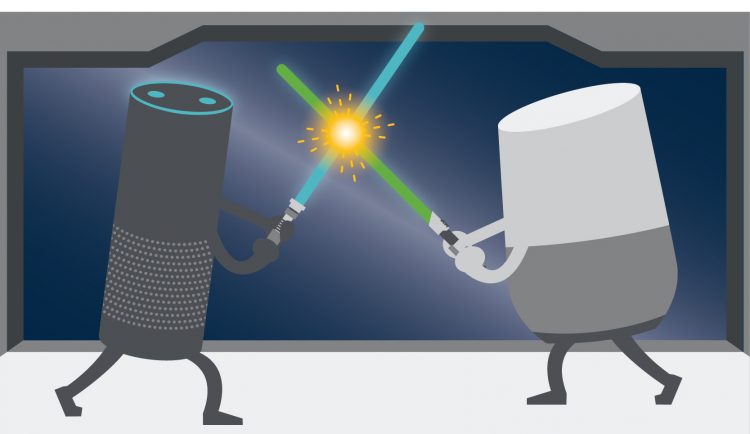 Research shows that Google Assistant users do much more than Amazon Alexa users. GadgetGuy has both types set up as testbeds, and we set out to find out why.

Note: In part our research used the search statement ‘Google Assistant users do much more than Amazon Alexa’ AND vice versa. It focuses on the past 12 months. Where possible we use Australian results.

The US voice assistant market had about 17% household market penetration in 2018. Australia has about 5%, but we were late starters.

In the US Amazon Alexa Echo speakers were first to market in late 2014 – virtually creating the voice control market – and took a commanding lead with 66.6% of sales in 2018.

Google Assistant came to market in mid-2017, but the tide is quickly turning towards it.

eMarket analysts state that Amazon’s US share will continue to shrink while its rivals will grow and overtake it by 2020. Particularly as Google Assistant support increases with brands like Sonos, LG, Panasonic, Bose, Sony, Lenovo, and Google’s hardware.

“Alexa only remains relevant by plugging it into the Amazon ecosystem. But third-parties like Sonos, LG, Bose, JBL and more bringing Google Assistant to its devices will change the balance in the voice assistant race.”

Amazon Alexa speakers have greater US market share because Amazon is an accepted shopping source. Not so in Australia. Why?

While there is also a good recognition of the name Amazon in the US (23rd in the Forbes RepTrack Index), Google rates well ahead at in third place. Millennials rank Google number one on that index. As the Amazon empire becomes more visible and the issues play out with the CEO’S messy divorce and some strategic airing of ‘dirty washing’ (trust issues), it is fast slipping in the ‘RepTrack’.

The reverse in Australia is because Amazon is not a household name here.

According to Neto Australia, an e-commerce platform that services Australian sellers on both Amazon and eBay.

We make the point that the US knows Amazon – not so much here and that may partially account for lack of take up of Amazon Alexa speakers.

What do people do with a voice assistant? (eMarket US figures)

Kantar Worldpanel is a global group of users and measures both intent and uses on a broad range of subjects. The US voice assistant panel comprises 20,000 users.

Kantar says Google users receive the most benefit and embrace more changes. Why?

Google Search use is on a vastly larger scale (than Bing), so it has learnt more.

A recent test by Loup Ventures (second year in a row) asking both Google Assistant and Alexa 800 questions resulted in a 100% answer rate and 87.9% correct on Google. Alexa answered 99% with 72.5% accuracy. In the first year, it has an answer rate of 88/73% respectively.

Loup Ventures shows the inherent bias/pedigree with this question, “How much would a manicure cost?”

Google’s accuracy is higher because it takes into account your location, past search history, social media engagement and other relevant factors when serving you a result. Yes, the more it knows about you so it can tailor results.

Google Assistant for shopping requires no ‘Prime’ subscription. When a user asks a product-based voice query to Google Assistant, Google Express presents its recommended products based on the query using the Shopping Actions platform. For smaller retailers, attracting shoppers through Google is a viable option.

Users report a high satisfaction level and that there are very few “Sorry I don’t know that, but I am always learning.”

Alexa answers are getting better, but it has more limited data sources

Alexa started as a voice portal for Amazon goods and services. It has more limited horizons – Amazon, Bing search and Wikipedia are its main data sources.

Amazon, Microsoft and Apple are trillion-dollar tech companies. BTW Alphabet, Facebook and Netflix are not far behind either. Interestingly these all have one thing in common – their services all use AI and machine learning.

Amazon started in 1994 as a cloud computing service (Amazon Web Services). It built an empire based on the online delivery of goods and services. Underpinning it is a very sophisticated AI analytics system to generate demand for its products and an e-commerce fulfilment system to deliver them.

It took just ten years for it to overtake Walmart – the US’s largest bricks and mortar retailer.

Understandably Alexa first draws on Amazon expertise, goods and services for an answer.

According to Alphametric, “When processing a voice search query, Amazon will prioritise whichever goods or service that are Amazon’s ‘choice’. These products use several criteria, including popularity, competitive pricing, low return rate, availability to ship quickly, sold by Amazon itself (not a merchant), and they must be Prime members. Amazon is moving from an e-commerce platform to a serious competitor for its merchants, reported in ITy Bytes on 22 March.

Alphametric says that this inherent bias (and that is Amazon’s prerogative with Alexa) means it is selling goods and services that make it the most return, not those that may be best for the user.

It finishes, “To shop using voice search on Alexa, users need an Alexa-enable device, an Amazon Prime membership, and the desire to shop from an arbitrarily limited selection of items.”

That leads to distrust.

Alexa claims 50,000+ skills including those for 20,000 smart devices and about 3,500 brands (e.g. banks, shops etc). It even has a Windows skill to supplant Cortana. A ‘skill’ uses the Alexa Smart Home API – not necessarily any hardware.

At last count, about 8,000 skills work in Australia.

Skills range from useful to banal. For example, there is a guard dog skill that makes the speaker bark. The only problem is that I could not get it to stop barking!

Many skills are more about promoting the brand/product than being useful. According to Deloitte the sole purpose of is to gain mind space, so you remember it when you purchase. “Skills are more brand name heavy and focused around asking for [a specific] brand than really useful.”

Google seems to require devices to be designed for Google Home, and that usually involves including a specific piece of silicon (chip). For example, the Philips Hue bridge is Google Home enabled allowing the far simpler command, “OK Google turn the lounge lights off” (as it knows what the lounge lights are).

It claims more than 1 million actions and 10,000 smart devices.

Twelve months ago, Alexa was ahead on points but what a difference a year makes. The use cases for voice assistants continues to and almost every new tech device supports them both. We are going on the voice control journey whether we like it or not.

And as time progresses all voice assistants will have to develop the same levels of linguistic competence or fall by the wayside. At present Google’s continued conversation mode and vastly wider language support puts it in front.

What will accelerate one over another is to find an exclusive, must-have, action or purpose.

For example, in the Apple world, you only have one choice. I suspect that in the Android world tighter integration with Google Maps, Translate, Lens etc., will make Google Assistant the one choice.

If you accept the stats, Google Assistant is fast narrowing the gap in Alexa’s US homeland and is well ahead in the rest of the world.

Without fear or favour, I have had a greater level of success in using Google Home products over Alexa skills products. With the former, it just works!