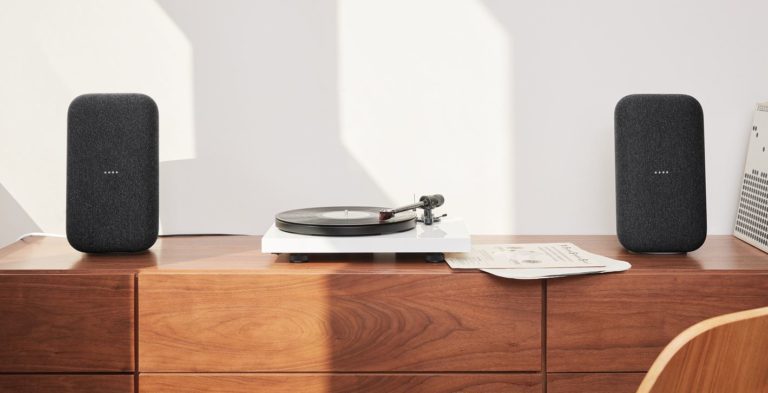 The new Google Home Max has been designed from the ground up as a music speaker. It achieves an almost perfect 20Hz-20kHz frequency response thought impossible from a home speaker.

GadgetGuy attended the Australian launch and was very impressed. Bass notes kicked in at 40Hz with remarkably flat mids and trebles just falling off at around 16kHz. Volume reached 84dB – loud.

What does this mean for the Google Home Max?

Google Home Max is an excellent speaker with a warm and sweet sound signature (bass/mids boosted, treble recessed). This is the nirvana of portable speaker makers. This means you can use EQ (equaliser) to boost bass if you are inclined or mids for vocals.

It has two aluminium cone, high-excursion woofers with dual voice coils, along with two 0.7-inch polyester dome tweeters. Six Class D amplifiers power the woofers (two each) and the tweeters get one each. The amps have onboard DACs capable of supporting up to 24-bit/192kHz.

To me, it is one of the best mid-sized speakers capable of faithfully reproducing metal to pop. We will be reviewing it shortly.

What is Google Home Max?

But the Google Home Max smarts don’t stop there!

It uses its six microphones and a smart sound algorithm to analyse the returning sound. For example, it will sound different on a bench, or on a shelf or even on a bookshelf. These environmental features can drastically alter the sound. It also listens for background noises like fridge, air-conditioners etc., and can compensate for these.

It even knows that sound is different in horizontal and vertical modes as well as stereo pairing.

The bottom line is that this speaker has similar room analysis to the Apple HomePod and should sound great no matter where you place it.

GadgetGuy’s take. Google Home Max is an impressive smart speaker even at the price

OK let’s put this in perspective. It is a Google Home a.k.a. OK Google speaker. That by itself adds value as the Google Home ecosystem grows.

To date, it delivers the best sound I have heard from a smart speaker. We will be doing a multi-brand shoot-out in a few days to prove it one way or another.

It accesses 40 million songs from YouTube Music, Spotify, TuneIn and Deezer. Via Bluetooth and USB your music or Apple Music. It even has voice match to allow up to six users to access their music playlists.

At $549 plus the lower cost Google Home and Mini, it’s a good investment in whole of home streaming music.