Google Mail Goggles: be made to think before you drink and email 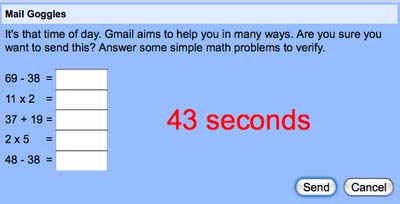 We all know a wild night can impede your better judgment – and in the age of electronics, it’s all too easy to hit the “Send” button after hitting the bottle. The next time you feel a late-night urge to email an ex, though, Google’s got you covered.

Meet Gmail’s latest Labs project, Mail Goggles. The program works like a breathalyzer: Before sending an email, you’ve got to prove you’re less tipsy than Paris Hilton on a Tuesday. (Or a Wednesday.)

Mail Goggles works with simple math. Once you set it up, it’ll require you to answer a series of math problems before being able to send a message. By default, the program activates on Friday and Saturday nights, though you can customise it for any day or time you might need a watchful eye.

You can also set the difficulty level to control how hard the problems will be (1 = a wine cooler with dinner; 10 = eight beers and an indeterminable number of Bundies).

The feature could prevent plenty of next morning regrets, not to mention countless groans from both exes and random girls met in bars (“Who the hell is Joe, and why did he email me at 3 am saying, ‘hey u want to hokup tonqiegt/?'”). Now, you might be thinking that it’d be all too easy to open up the desktop calculator and solve the problems, buzzed or not. That’s where the difficulty level can help. Set it high enough that your slow-moving self won’t be able to find the calculator icon in time, and you’re good to go.

All that’s left is for someone to invent the text messaging equivalent, and the modern day booty call will forever be silenced.

Translation for the ladies: Prepare to start getting a lot more post-midnight voicemails.

Admittedly such a ‘reality check’ really ought not be needed and we dare say that it could prove infuriating to have to solve maths problems when all you want is to forward a well thought out rant to someone (whilst in full procession of your faculties) – thankfully you can configure when the application will kick in, however, but, if it also works to halt you from sending that mail composed under the influence after a night out that you secretly know you’ll probably regret, the fact that Google Goggles could just keep you from signing on the next day could, just could prove to be a lifesaver.