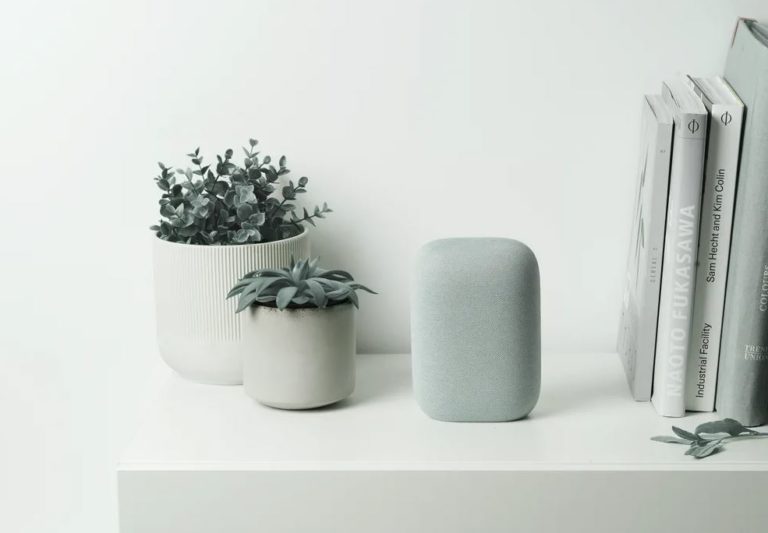 Google Nest Audio is a $149 Google smart speaker with a modicum of audio tuning that makes it both useful and sound good too. Which I have to say for a low-cost smart speaker is pretty unusual.

The Google Nest Audio designers started from the premise that you did not need to be an audiophile to appreciate good sound. Joe and Jane Average can tell the difference even if they can’t relate to things like Bass, Mid, Treble and sound signatures. GadgetGuy has a guide here that goes into all that.

What they found is that Joe/Jane could perceive loudness differences, distortion level, artificial sound (synthetic versus natural sound), and whether there was any bass strength. So that is what the Google Nest Audio seeks to address – to hear music the way it should sound.

Let’s get some perspective here

The Google Nest Audio is the replacement for the original $199 2018 Google Home. Now that speaker was not too bad when it came to sound with reasonable high bass from 100Hz and relatively flat frequency response to 10kHz. I called it “Easy listening and not harsh at full volume.’

Since then, Google rolled smart speakers into the Nest division, so its siblings now include the Nest Hib, Nest Hub Max, Nest Mini (Gen 2). The big beastie Home Max is still current.

So we are not comparing it with an expensive hi-fi speaker from Bose, JBL, LG Meridian, Sony etc. it is a smart speaker with benefits.

Google is joining the pervasive ‘almost’ no-specs brigade which, as far as GadgetGuy readers are concerned is a shame. We get off on watts RMS, THD and more.

Before we get into sound, it has ambient IQ. No, this is not room tuning, but it uses its three mics to determine what ambient noises the audio content is competing with. It is not something you can see or touch – just take Google’s word for it.

Next is a basic Google Home EQ where you can adjust Bass or Treble. Google designers mentioned a Media EQ that analyses content and adapts for music, podcasts, audiobooks or Assistant.

Google claims a maximum of 86dB and our tests topped out at 82dB. The sound was surprisingly clear and ‘listenable.’

This is a balanced sound signature – neither the bass nor treble overpowers the mid-range. The EQ does allow for some high bass reinforcement, but I would leave it flat.

BTW below is the original Home frequency response – pretty good for its day too although the Nest Audio has far better bass and treble control to avoid harshness. BTW – we cant substantial Google’s claim that the new Nest Audio is 75% louder than the Home – it was 80dB.

Duo and other calling

You can read more about what Google Assistant does here.

If you have any smart speaker from any supplier, then it collects data on you. What you ask for, where it is and often much more.

First, you can mute the mic via a dedicated slider switch. As we have a home full of Google Assistant speakers, this is handy to stop them all answering!

Second, You can view your Google Assistant history in My Activity accessible via the Google Home app and online at myactivity.google.com. You have control over your data and can delete history at any time.

Unlike some other speaker ecosystems, this is not an adjunct to an online shopping mall.

Google Nest Audio reflects 2020 technology and a lot of experience since the original launch.

I have a truckload of Google speakers from LG, Sony, Lenovo, Panasonic, Sonos and more. At $149 it is almost in a class of its own – perhaps challenged by the JBL Link Music  ($169.95 5/5 – not in stock anywhere). It is slightly louder at 84dB and has a slightly better frequency response for music.

Rating this is easy. In its price bracket, there is a) no alternative and b) no better. It is a tangible improvement over Google Home. I would still like detailed specs, so I am going to drop a point or two for that.

BTW – our retail sources tell us that sales of Google Assistant speakers have reached three-out-of-four sales – 75%. That is up from 68% in Q1 this year (Source WhistleOut). Its success here is because Amazon is not a household word and the Google Ecosystem is supported by so many IoT devices and speakers – LG, Sony, JBL, Sonos, Lenovo, Bose and many more.

Features
Value for money
Performance
Ease of Use
Design
Reader Rating1 Vote
More aesthetic than the original Home
Better sound than the original
Local processing means faster react times
No 3.5mm audio in (but not a deal-breaker as it has BT/Chromecast)
Plug pack is too wide to fit a double 240V point
4.4