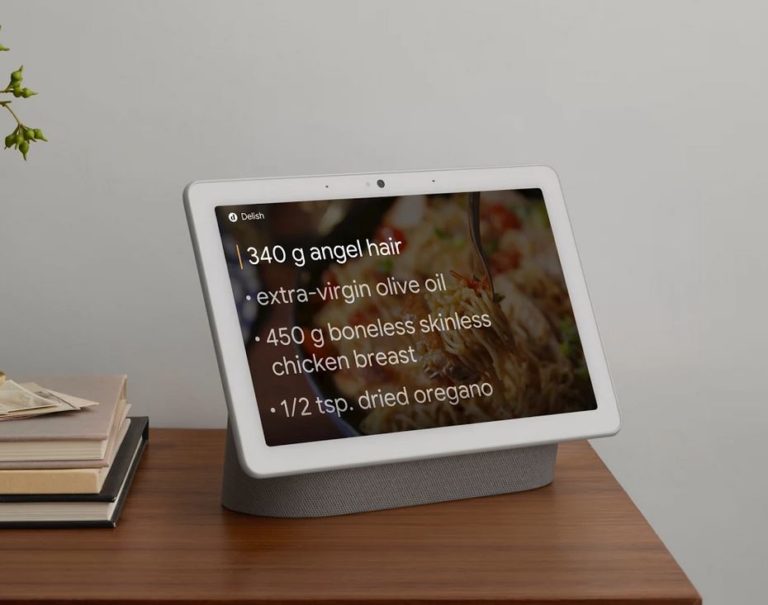 I have been using Google Assistant, ever since, well it came out. Voice is good, but voice and vision are perfect especially when I don’t want to get my phone out to see more! The Google Nest Hub Max incorporates the best of both worlds.

What’s this ‘Nest’ bit? Well, Alphabet, Google’s parent company also own Nest famous for smart home products like the Nest Protector Smoke Alarm that scored 4.9/5 and its three varieties of Nest Cam with 4.2/5. Google Nest Hub Max is a cross between the Nest Cam and a larger version of the now called Nest Hub. Google Nest is its new smart home brand.

To be clear – it’s a 10-inch maxie version of the Hub with a Nest cam. It is called Google Nest Hub Max – simple. The website is here.

Cost is $349 with free delivery from Google and from major retailers including JB Hi-Fi, Good Guys, Office Works and Harvey Norman.

Google kindly gave us a Google Nest Hub Max, and we have had some time to put it through its paces. Over the next few weeks we will update this review as we use it more. What we won’t do it go through everything Google Assistant can do – it is all here.

Let’s get a handful of the specs out of the way.

Design-wise it is a 10-inch tablet floating on a barely visible pedestal base housing the two front-firing speakers and the rear-firing woofer.

Google says the Nest Hub Max is best suited for the kitchen. No, it is not waterproof, but the screen can, however, and the fabric plinth gently washed.

For our tests, we placed it in a 5x5m large bedroom and a larger open space kitchen/lounge/dining area.

It is a 2.1 (Left/right/woofer) system. It can also be paired for stereo and in a multi-room setup. You need to remember that its tweeters are 18mm and the woofer is 75mm. To put that in perspective, a reasonable set of headphones have 40mm drivers!

It pumps out 80dB with reasonably low levels of distortion although it is much more pleasant at 60-70dB.

The Google Home App has an Equaliser (EQ) that can adjust bass or treble +/- 6dB. On the flat (off) setting, Bass starts late at 90Hz, and frequency response is relatively flat to about 2kHz where it gradually decreases and falls off the cliff after about 16kHz. The EQ does not do a lot to bass but can increase treble levels slightly.

It is a ‘wannabe’ warm and sweet signature (bass/mid boosted, treble recessed) – the nirvana for music – but it is more mid-centric to ensure clearer voice. I tried with a bass-heavy Blues Brothers Peter Gunn Theme, and vocal/instrumental The Beach Boys Help Me Rhonda and both were pleasant enough as a house speaker.

Like most Google Assistant speakers, it uses Google Music, Spotify, YouTube Music, supports BT 5.0 pairing with a smartphone or PC and Chromecast.

The Google Nest Hub Max makes no noise when not in use.

Early reviews say 1280 x 800 resolution is not enough. Indeed if you want a higher resolution of 1920×1200 (and higher volume and a better sound signature) then head straight to the Google Assistant-enabled Lenovo 10-inch Smart Screen which is $279. All it lacks in comparison is the gesture and face ID feature.

After a few days of use, I really don’t think the resolution is a deal-breaking issue. A 10-inch, 149ppi, screen, usually viewed from a metre or more away is fine for YouTube, Google Duo video calling and as a picture album.

Google do not publish brightness or contrast. We measured a maximum of 220 nits – lower than an IPS monitor but enough to be daylight readable in your kitchen and not enough to be an annoyance at night. It does not appear to have a blue light issue showing white as warm white around 3000° K.

In any case, its ambient light sensor (on auto) adjusts the screen light very well – a little too well as we tested it in the bedroom, and it was trying to keep up with the TV going from light to dark in milliseconds. If you have such a variable light source, use manual brightness settings.

It also supports Google Play Books and Chromecast. While we would all love Netflix and other streaming sources, this screen and processor/GPS are not compatible.

We suspect it shoots at a much higher resolution, but the 127° FOV, gesture recognition, and digital zoom (auto-framing focuses on you as you move around the room) means the camera crops the finished image to 720p.

It also seems to have good low light capabilities reflecting either pixel binning (as Google does with its Pixel smartphones) or very larger pixels (say 4 to 5um). As it lacks the AI CPU/GPU/NPU horsepower to pixel bin, we suspect it uses large pixels. The effect is evident in remote Nest Cam video where considerable ‘noise’ is evident (the larger the pixel, the more noise it injects in low-light video).

In any case, the screen only supports HD standard whatever it does with the extra MPs is immaterial.

A neat trick of the Hub Max is you can leave a video message (in Duo) or broadcast to other Google Assistant speakers or screens.

Note: To use the security features of Nest Cam you need a Google Nest subscription.

You can play/pause content by holding your palm up to the camera. This saves sticky fingers all over the screen.

At 100% volume, I had to shout to get Google to take notice, but it was remarkably good at recognising my voice at sound levels up to 70dB.

Google Nest Hub Max is more about what it can do

Google really feels this is the embodiment of a real assistant. It wants to voice and face match you (up to six faces/voices), so it can use the camera to recognise you and present things like your calendar, commute times, personalised lists, reminders and more. Hey, it even greets you when it sees you.

It wants to encourage you to use the Nest camera and be part of the Google Nest security system.

And it wants to help control your smart home devices.

In short, unless you go down the Google Home Rabbit hole you really are getting about 50% of what it can do.

It is well made, has a nice innocuous design, 1280 x 800p video, 720p camera and does all it promises. That camera is the secret sauce that enables gestures and Nest security monitoring (if you have a subscription).

While I prefer the Lenovo 10-inch smart display for superior sound and screen resolution, there is a certain appeal in a combo Nest Cam device (Lenovo can link to Nest Cams and other smart devices). It’s a hard call.

Google, however, don’t care (well, I am sure it does) as it produces reference design devices to spur its partner ecosystem along. Google Nest Hub Max will see a string of imitators, and it is happy with that.

One thing for sure – the Google Home ecosystem is sprinting forward and at last count Voicebit.ai (Q4, 2018) stated Google has 68% of the Australian 5.7 million home speaker market and Amazon Alexa has dropped to 14% (most driven by wanting to get some value from their Amazon Prime membership). Researcher Telsyte says that Google grew to 72% in Q1, 2019.

There is so much choice with more coming that the Google Nest Hub Max is a compelling way to get into this burgeoning ecosystem.