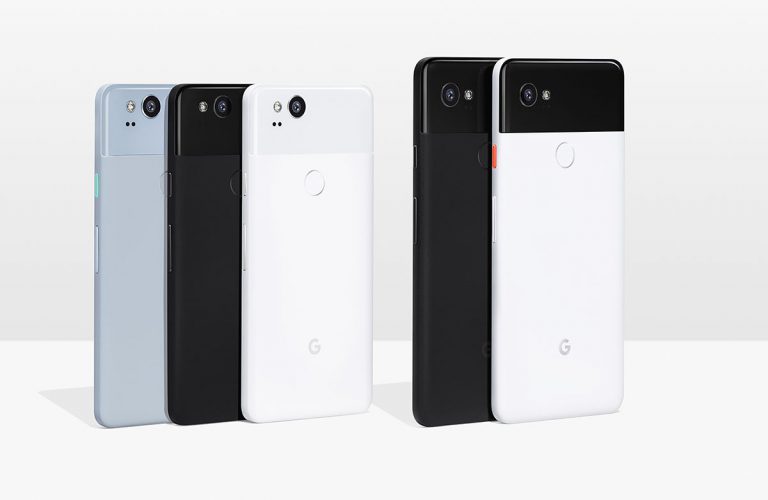 There aren’t many degrees of freedom in phone design. A phone has to be thin. It has to have a large flat face. It has to be as small and thin as possible. No wonder so many look very much the same as so many others. Yet Google has made the new models stand out.

The Pixel 2 XL is bigger, of course, than standard Pixel: 158mm tall vs 146mm, 77mm wide vs 70mm and 7.9mm thick vs 7.8mm. It also weighs a little more at 175 grams versus 143 grams. The Pixel 2 XL is available in “Just Black” and “Black & White”, while the Pixel 2 also gets “Just Black”, plus “Clearly White” and “Kinda Blue”. What joins them as a family and sets them apart from others is the contrasting finish of the top quarter or so at the back. Even with the “Just Black”, the texture at the top is glossy, and so it stands out.

Both phones are also made with an “aluminium unibody” and are IP67 rated, which means fully sealed against dust, and good for immersion at up to a metre for up to half an hour.

The other main differences between the two models are the screen and battery.

The Pixel 2 has a 5 inch, full HD (1080 by 1920 pixel) AMOLED display with Always-On capability, a 100,000:1 contrast ratio, and 95% covering of the DCI-P3 colour range. The XL goes to an 18:9 ratio for its six inch screen, with 1440 by 2880 pixels and pOLED technology – apparently OLED using a plastic substrate – providing the same contrast ratio, and a full 100% of DCI-P3. Both are covered with Corning Gorilla Glass 5, with 2.5D edges (that’s the diameter in millimetres of the circle from which the curve is drawn) for the Pixel, and 3D edges for the XL.

The other main difference is the battery. The Pixel 2 gets 2700mAh. The Pixel 2 XL gets 3520mAh. Both are quick chargers, with a fifteen minute burst of charging rated to give them seven hours of life.

Naturally the phones run the latest Android, Oreo 8.0. Google promises a “minimum 3 years of OS and security updates”. The way things are running, I guess that means you will get an upgrade to at least Android X. They also run the latest and hottest existing Qualcomm processor, the Snapdragon 835. Four of its eight cores run at 2.35GHz, the other four at 1.9GHz. Graphics is via built-in Adreno 540 running at up to 710MHz (and 567 gigaflops!)

The processor has 4GB of RAM. For storage, Google has continued with fixed amounts with no expansion capability. You can get either phone with either 64GB or 128GB. But you also get guaranteed, apparently perpetual, Google Drive storage. The amount is enough for “unlimited original-quality storage for photos and videos taken with Pixel until” 15 January 2021. For photos taken after that, you get “high-quality storage”.

As for me, I’d still like an expansion slot.

And speaking of photos, both phones feature the same cameras. The main one is a 12.2 megapixel, f/1.8 unit with both optical and electronic image stabilisation, and with laser and dual pixel phase detection auto focus. It can shoot video at up to 4K at 30 frames per second. Google says that it is the highest scoring phone camera at one of the most commonly cited camera review websites.

Amongst the usual range of sensors – proximity, ambient light, hall effect, fingerprint (on the back) amongst others – there’s also an “Active Edge”. I’m guessing you’ll be able to squeeze it and have something happen.

Headphone socket? Nope. But you get an adaptor for the USB Type-C charge and communications socket. You also get the Quick Switch Adaptor, allowing you to transfer your data from an iPhone or Android phone over wire, easing the shift.

The 4G LTE connectivity supports up to CAT 15 for 800Mbps downloads. WiFi is dual band up to 802.11ac with 2×2 MIMO for fast transfers. NFC is supported. The Bluetooth version is 5.0+LE (low energy). All four global positioning systems are supported.

You can go to the Google store now and “register your interest” so you’ll be notified the moment they become available. Meanwhile, in Australia you can pre-order from 20 October 2017. The Google Pixel 2 will be available with 64GB of storage for $1079, and 128GB for $1229. The Google Pixel 2 XL has the same memory options and is priced at $1399 for the lower capacity model, and $1549 for the higher one.