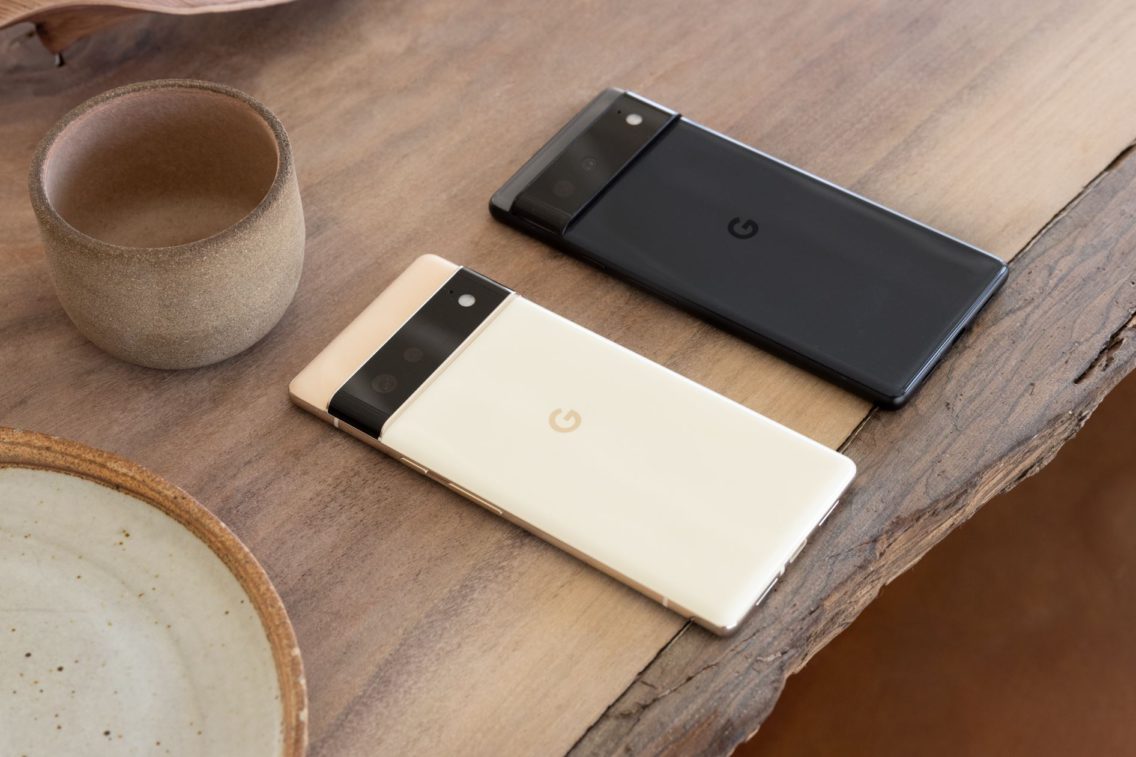 Google’s best Pixel smartphones yet. The Google Pixel 6 and 6 Pro shootout proves they are up there with the best and should attract a far larger audience than previous models.

It is not that previous models were somehow inferior to others of their ilk – the Pixel 3, 4, and 5 (and variants) were all excellent phones for the time. But they ended up as pure Android enthusiasts devices, lacking mass-market appeal.

The Google Pixel 6 and 6 Pro change that. They are a combination of excellent hardware finely tuned to Google Android 12. If you have $999 and $1299 to spend, these must be on your shopping list because there are no real downsides – just a few caveats for specific uses.

Throughout the review, we will indicate 6 Pro differences in (brackets); if there is nothing, they are the same. Which one will win?

We issue a strong warning that you must buy a genuine model with Australian firmware, specifically models GB7N6 and G8VOU.

It is easy to identify the Australian version – under Settings, About Phone, Regulatory Labels, you will see the Australian RCM C-tick mark. There is also an RCM C-Tick on the box.

They use unique Australian 5G sub-6Ghz and 5G low-band frequencies and require local activation first. That means a grey market phone likely won’t be able to use 5G here. Also, you will not get local warranty, over the air OS and security updates, nor make a 000-emergency call without a sim.

We have named and shamed the prominent grey marketers here. If you are going to spend this much money, get a genuine ‘Made for Australia’ model.

These are straight out of the Google playbook with cute names, design cues and colours. The key difference to previous Pixel models is the prominent landscape camera bar that houses a dual-LED flash and LDAF (laser detect auto-focus) sensor. The bar means it does not rock when placed on a table and has raised edges to protect the lenses.

Screen – among the best OLED

Both screens are excellent, with the 6 Pro using a Samsung LTPO OLED screen similar to the OPPO Find X3 Pro (that has 1.07 billion colour capability). It is the standout, but it punishes the battery if you run it at 1440@120Hz.

* The Google-designed Tensor Chip is based on a Samsung Exynos 2100 (the same as the Galaxy S21 series) using Samsung’s Exynos 5123 modem. It is optimised for Google’s AI and ML (artificial intelligence and machine learning) mobile applications. These include speech recognition, language translations, computational photography, power efficiency, security and Google’s claim of up to 80% faster than Pixel 5. It is a very new chip and benchmarks, particularly AI TOPS, are few – we will update these when we can.

We are concerned that the external SSD or Flash storage can be seen in ‘Files’ but will not return a test result. This usually means it cannot be for live storage e.g. mounted, only for drag and drop from internal storage. If this is the case, then it is useless to videographers and vLoggers.

They both have Android 12 with a security patch date of 5/11/21 and build number SD1A.210817.036. Unless Google can fix this throttling, these are not good gaming or extended 4K video recording capable devices.

The main difference is the Ultra-wide-band chip on the 6 Pro. Again we express concern that without microSD expansion and the apparent inability to mount external storage for video, this device is too limited for professional users.

LTE and 5G – it is a city/suburbs phone

The Samsung 5123 5G Modem (used in Samsung phones with the Exynos 2100 SoC) does not have the same antenna signal strength as Qualcomm X55 and X60 modems. For example, the OPPO Find X3 Pro with the Qualcomm SD888 (below) finds four towers and is for the city, suburbs, regional, and rural use.

The Pixel 6 and 6 Pro are city/suburbs phones where you can get strong coverage from multiple towers.

Battery life is nowhere near the 48-hour claim.

The fine print reads ‘maximum battery life based on testing using a mix of talk, data, standby, and limited other default features in Extreme Battery Saver mode, which disables various features, including 5G’.

We tested with different chargers and any USB-C PD charger 30W or more is fine. But only Google’s charger reached rated charging wattages.

Despite the battery capacity differences, they lasted about the same time courtesy of the adaptive 90Hz (and 120Hz) screens. But when pushed with graphics-heavy tests, the 6 Pro’s 120Hz rate saw screen-on time reduce from 5.5 hours to 3.25 hours.

We are concerned that they both cannot run the GFX Benchmark Manhattan 3.1 nor GeekBench 5 Open CL or Vulkan tests.

You will need a daily charge and buy the genuine charger or suffer significantly longer charge times.

The maximum volume is a tad low but fit for purpose. Lack of aptX codecs is an issue for those using aptX headsets.

The sound signature verges on analytical (bass/mids recessed, treble boosted), which is crisp but can be overly harsh and unpleasant for most music. You can read more about sound signatures, why they are so important and how we test.

There is no EQ or pre-sets nor any support for Dolby Atmos or other spatial music.

Build – quality all around

I understand that Foxconn makes these. It also assembles the Apple iPhone. Build quality is excellent.

Google calls the Android 12 UI ‘Material You’, which is chock full of themes and styles. You can retain the old three-button navigation if you wish.

Several exciting features revolve around voice and translation. You can voice type (Hey Google, Type) and send a message. It can live translate from a foreign language (Live Caption) or a camera image. It has 55 offline and 104 online languages. Or it can be an interpreter between two languages both ways.

A new Privacy dashboard helps you to identify what apps have permissions and to control them. A security hub offers all device security tools in one place. Emergency settings help you via car crash detection and can send an SOS.

Our test results show neither of these sensors is a spectacular performer and rely heavily on AI processing.

It uses an STVL53L1 Time-of-Flight (ToF), laser-ranging, sensor with a range of 4m.

Laser focus bounces an infrared laser to calculate the distance between the object and the camera. It is very fast but has a maximum distance of four metres; then PDAF kicks in. The result is that bokeh beyond 4m is variable.

The camera app has a choice of video stabilisation: standard (light movement), locked (to the horizon), active (heavy movement) and cinematic pan (half speed).

The Pixel 6 takes up to 1080p@60fps. The video is stable with accurate colours. The 6 Pro takes 4K@30fps, but it is not as stable, and the colours are not as vibrant. Both have 4X zoom.

The Google Pixel 6 and 6 Pro shootout proves these are Google’s best efforts to date. It is streets ahead of the Pixel 5 series in speed and camera performance. It is a worthy flagship, and the more you use them, the more features you discover.

But neither device is perfect. CPU throttling will affect videographers and gamers. Being unable to record video to an external SSD will affect videographers and vLoggers. The speaker sound is average with no EQ and no aptX support.  And it is a shame that the USB-C 3.1 Gen 1 is not enabled for ALT DP video/audio out, although that is probably to enforce some digital rights management laws.

If those issues are not important to you then these are worthy of your strong consideration.

These both exceed paradigms for a flagship device. Add to that 2-year warranty, 3/5 years OS upgrades/updates, great camera and battery life commensurate with expectations, and it earns a few more points.

But the Throttling, USB-C limited implementation, no charger and narrow range of BT codecs knocks some of the gloss off. We will continue to review these especially as we expect firmware upgrades to address some of the issues.

Android Competition ans should you buy it?

We have a detailed look at the competition and make buying recommendations depending on your use.

Google Pixel 6 and 6 Pro shootout
Both the best Pixel devices yet but a few quirks need to be solved before they are class-leaders
Features
8.5
Value for money
8
Performance
7
Ease of use
9
Design
8
Positives
Exceptional build quality asnd unique Google design cues
IP68 and Qi charge
Great camera but needs a little work on the camera app
Good daylightr eadable displays
Android 12, 12, 13, 14…
Negatives
Throttling is more than expected and will be a deal breaker for power users
Limited USB-C 3.1 implementation - no ALT DP or external stroage mounting
Average selfie camera
8.1