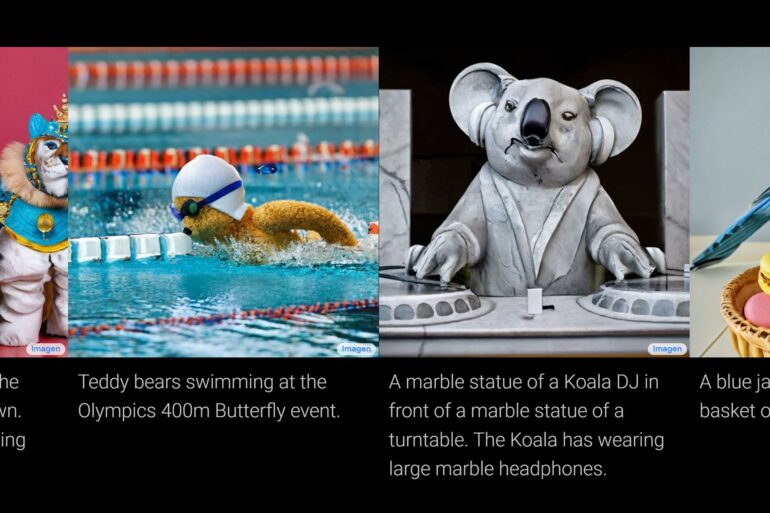 AI text-to-image generators are so hot right now. You type in some text and receive a picture that looks impressively close to your request – no matter how oddly specific the prompt may be. The technology is so hot that even Google wants in on the action with its own text-to-image technology, Imagen.

Want to see exactly what Imagen is capable of? Check out the official Google website for the project. Featured are highly detailed images produced by the technology, such as a flooded Monet art gallery attended by robots, a strawberry mug floating in a dark chocolate sea, and a koala DJ’ing on a turntable made of marble. Every image is accompanied by the text prompt it’s based on, each one more surreal than the last. Imagen generates pictures through a combination of language recognition and diffusion, which uses patterns of dots to create a visual it recognises.

Just don’t expect to be able to use this technology anytime soon. Under the “limitations and societal impact” section of the Imagen website, several reasons outline why Google isn’t handing out access to anyone who wants in. Firstly, the “potential risks of misuse” are currently seen as too great for public consumption – a fair point considering how quickly misinformation spreads online alongside concerns over deepfake technology.

Another factor is apprehension over Imagen results upholding social biases, such as “an overall bias towards generating images of people with lighter skin tones and a tendency for images portraying different professions to align with Western gender stereotypes.”

Google isn’t the only company working in the AI text-to-image space either. DALL-E 2 is a different model from research company OpenAI, and the technology is also not publicly available. Instead, OpenAI rolls out access to DALL-E 2 to testers and researchers on a limited basis. The reasoning behind this is to “develop and deploy AI responsibly” and study the technology within a confined setting.

Sure, it’s a bummer we can’t all log into Imagen and play around with the text-to-image generation. However, it makes perfect sense to let the experts sort out the ethics behind the technology first. In the meantime, we can still marvel at the impressive results and brainstorm potential prompts.