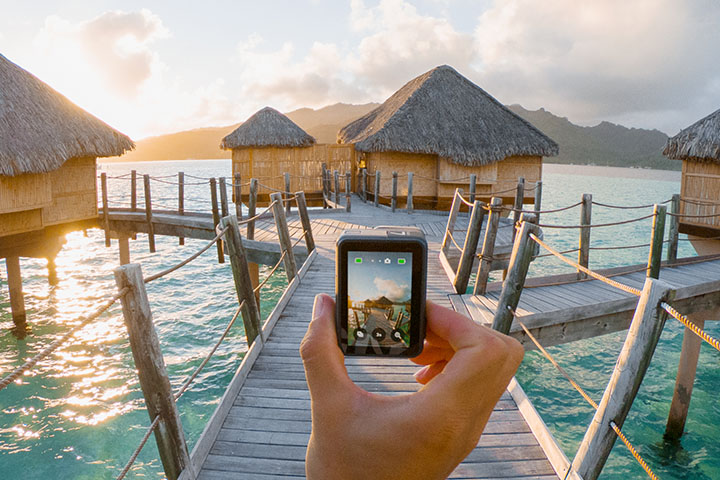 The GoPro Hero 7 Black is of course entirely digital. But, fun fact, did you know that the first GoPro was a 35mm still camera? That was back in 2005, when digital sensors were still quite primitive. Only in the following year did a digital one appear. Video capabilities? 320 by 240 pixels for all of 10 seconds on its internal 32MB of storage.

The camera is tiny, of course. The official measurements are 62.3mm wide by 44.9mm tall by 33mm deep, including the lens housing. On the specifications page for the GoPro Hero 7 Black a paper clip is pictured as a size reference. The camera with card and battery installed weighs 115.7 grams. That makes it a little lighter than some of the main competition, although a difference of less than ten grams is unlikely to make much difference.

On the back is a 50mm touch-sensitive colour display. At the front is a monochrome LCD display. The back one shows menus and, of course, what the lens is seeing. It’s your main centre of control – apart from the record button and the power/mode selection button. The front display shows current video setting, battery state, recording time remaining on the card and length of the current recording.

Of course, the GoPro Hero 7 Black is super portable. Apart from anything else, it’s rated to cope with immersion – and use – at depths of up to ten metres.

The standard for action cameras

GoPro has so dominated the action camera market that its two/three-lug mount has become standard. Indeed, certain other brands are provided with compatible frames. Of course, there are a wealth of attachments available for the GoPro Hero 7 Black from the company. Perusing the GoPro website, some of them look rather pricey. The “Pro Handlebar/Seatpost/Pole Mount” attachment, for example, costs $94.95.

But because they’ve become the industry standard, you can go third party. I already have a low-cost accessory-mounts pack so I was able to use its contents.

Included with the GoPro Hero 7 Black are two adhesive mounts – one gently curved – and a clip-in mount with lugs atop it. Also provided with the GoPro Hero 7 Black is a frame mount – it’s a tight fit getting the camera in and out, but it’s doable – and a USB Type-C cable for charging and file transfer. Apparently, you also get a free SD card with all GoPro Hero cameras. The one included with the review unit was a 32GB SanDisk Extreme UHS-1 card with a read speed of up to 100MB/s.

As is the way of these things: Documentation? Almost zero. Well, a brief promo card for “Plus”, the GoPro damage replacement, cloud backup and discount program. On the other side of that are a dozen graphics illustrating things. There’s a card pointing you at gopro.com/answers for everything else. Plus, the obligatory GoPro brand sticker (two of them!) and the substantial “Important Product + Safety Instructions” booklet. I presume that’s required by laws which are, of course, years behind the times.

Don’t worry. There is a quite decent PDF manual online.

Of course, the GoPro Hero 7 Black does more than just the “Insanely smooth 4K” touted on the promotional material. But that 4K really is remarkably smooth, as we’ll see. In part that’s due to the ability to record 4K at up to 60 frames per second. Remember, almost all cinema is shot at just 24 frames per second. The video 60p video from this camera is like looking at high quality content on a modern TV with motion smoothing switched on, except that there’s no distortion. There’s also a stabilisation system called “HyperSmooth”.

Also, in the main settings you can set the camera to NTSC or PAL. Those terms don’t really apply. They are merely shorthand for 60fps (and its multiples) and 50fps (and its multiples). If you’re creating footage intended for Australian TV you’ll want to choose the latter. Stuff shot at 30fps and 60fps does not translate smoothly to our frame rates.

You can also shoot vertically if that better suits your subject or outlet, for example Instagram.

Photos are 12MP. You can choose the level of processing you want, or even shoot RAW. Shutter speed is manually controllable if you really want to get deep into the settings.

There are also “Protune” settings, even for video. Again, you can control the shutter speed (within the limits of the frame rate, of course) and adjust the level of processing. Just as importantly, you can have the GoPro Hero 7 Black record the audio to a separate WAV file, again with different levels of processing. All that stuff’s great for professional work.

There are plenty of other features. For example, voice control, video looping, GPS tagging and live streaming via Wi-Fi. The GoPro app allows you to control the camera and see what it’s seeing.

I mounted the GoPro Hero 7 Black on the head tube of my bike using the frame clamp from my mount kit. Then I started it recording and went for a few rides. Well, if you have resolutions of up to 2160p60 available, why not use them?

The unit recorded up to 3.73GB per file, automatically switching to a new file at that point. The sequential numbering was weird. The files were numbered GX0[S]000[N].MP4, where [N] was the number of the session, and [S] was the sequence of the file within the session. So standard alphabetical/numerical sorting on your computer, and most other devices, will result in all the first segments being played, followed by the second segments and so on. It’s probably best to get the files off the card and into thoughtfully named folders on your computer quickly while you remember what’s what.

For 2160p video, the GoPro Hero 7 Black uses the H.265 codec, otherwise known as HEVC. That’s the format used on UltraHD Blu-ray and its more efficient that the H.264 that the device uses for lower resolutions.

I watched the resulting footage on my computer, and while sharp and clear, there were occasional odd artefacts in the video. But my monitor isn’t a full UltraHD monitor, so I watched it on my 65-inch LG OLED TV instead. That produced a very different result: smooth, detailed, unbelievable sharpness.

The auto-exposure of the camera was nicely judged. At one point I was passing through a tunnel under a road and the bright exit washed out the picture briefly. But the camera clamped down smoothly and brought everything back to the correct brightness. If I’m going to get super picky, at one point the bitumen bike path looked as though it had some slightly laggy patches. Or perhaps it was just posterised. The camera supports HDR, but that’s camera-style HDR. It doesn’t give more bits to play with, so colour and brightness are defined on an eight-bit scale. That can lead to darker elements being crushed into a small range of colours. Posterisation gives a kind of paint-areas-by-the-numbers look.

H.265, like H.264, compresses across time as well as spatially, so that can lead to elements within a video losing timing with the rest of the image. Rewatching the segment, though, I came to the view that it was in only one specific part where the daylight was illuminating the path at a particular angle. The appearance of lag seemed to really be colour and brightness level-jumping through those eight bits rather than timing lags.

The only other visible defect was a brief moment of aliasing on a road grate.

Those were the only two moments of imperfection I could see in around twenty minutes of video. That video, incidentally, seemed to run at between 50 and 70Mbps. The colour space used was BT.709, the same as Blu-ray. The embedded audio was stereo AAC with 48kHz sampling.

Now there’s one other thing I must note about the video. Golly, talk about smooth. GoPro calls its “HyperSmooth” process “Insanely smooth”. I can’t disagree. My bike is an old racing-style road bike. It has thin tyres which are pumped up to high pressure. There are no concessions to comfort. The audio is accompanied by the sound of the bike’s aluminium stand frequently shaking hard against its spring as I go over bumps. My journey took me over surfaces with plenty of medium sized bumps, cracks between segments of concrete paths, and sections of very roughly finished bitumen.

And throughout the image looked steady. Even in the slow, uphill bits where the bike was leaning from side to side in sympathy with my pedalling, the camera maintained a steady horizon. It was the handlebars, caught at the edges of the picture, jumping and writhing from the vibrations and course corrections.

It really was a remarkable performance.

The GoPro Hero 7 has a mini-HDMI output and a USB Type-C socket. The latter is for charging and for file transfer.

So, how fast was the USB Type-C connection? When I had three video clips amounting to 4.91GB in size – that 4K stuff chews up data fast! – I copied it to the SSD in Surface Pro 2017 via a USB 3.0-rated cable. It took 1 minute and 23 seconds to transfer the data. That works out to over 60 megabytes per second. I can get 90MB/s using my fast card reader, but it hardly seemed worth the bother of popping out the card for a fifty per cent speed increase.

Clearly GoPro hasn’t been merely resting on its reputation. With the GoPro Hero 7 Black, it’s working hard to keep itself at the top of the class. And it’s managing it.